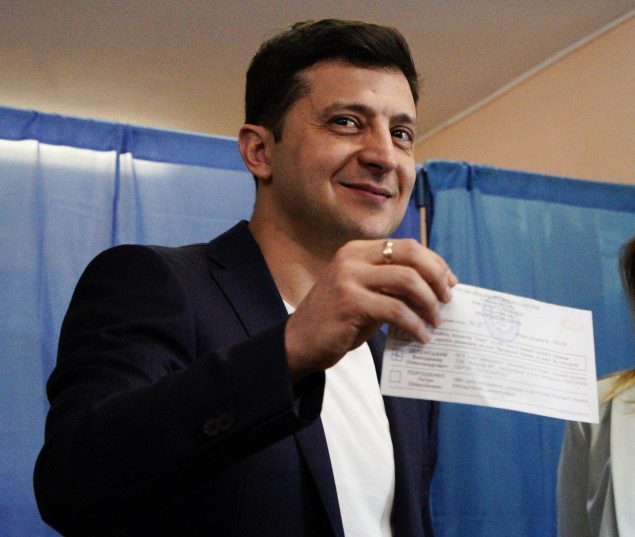 With vote counting continuing, it would appear that Volodymyr Zelenskiy will be Ukraine’s next president. Earlier exit polls gave Zelenskiy a lead of more than 73%. This piece from the South Front team appeared early on election day and clearly states that they support his candidature.

On April 21, Ukraine is holding a second round of the presidential election. Surveys show that comedian and political novice Volodymyr Zelenskiy leading with over 70%.

Since the very start of the Ukrainian presidential campaign, SouthFront has been covering critical actions of both leading presidential candidates Petro Poroshenko and Volodymyr Zelenskiy. However, now, when it is clear that Zelensky is becoming the next President of Ukraine, SouthFront can say publicly that we support his candidature.

We hope sincerely that he would be able to recreate a strong developed Ukraine that would become an equal, independent partner of its neighborhoods: EU states and Russia, get an appropriate place on the international scene, throw off the neo- colonial oppression of the global elites and avoid a vicious dependency from Russia. We hope that some Zelenskiy’s election promises, like the legalization of prostitution, gambling and soft drugs, will remain empty words.

We want to believe that Zelensky has the desire and will to use an opportunity to crack down the oligarch system established in Ukraine. We hope that he would be able to build up a sound society that would not be oriented on the needs of the ruling aristocracy only. We hope that this new form of society would be developed to solve at least some issues faced by ordinary people.

The victory of Zelensky and the following reforms, if they really take place, could shape cardinally the situation in Ukraine and, in some cases, even in Russia.

Many Ukrainians (some SouthFront Team members are also from Ukraine) have concerns that Zelensky will have no independency, which is needed to carry out real political and economic reforms.

Nonetheless, we wish a good luck to the de-facto elected President of Ukraine.