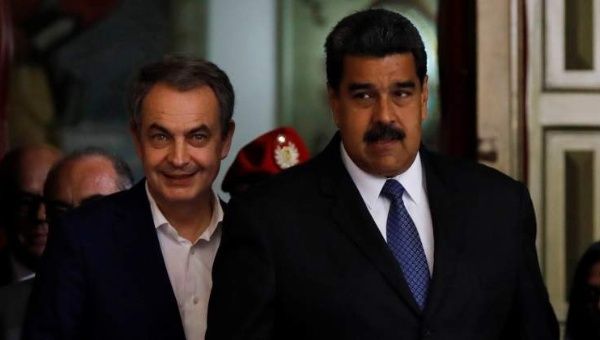 Originally appeared on Telesur-english
The former Spanish Prime Minister stated that from his “perspective there has to be a principle of responsibility of the political forces.”

“It is not only necessary, it is essential” to collaborate and help a “brotherly and very close country like Venezuela,” the ex-PM said, urging opposition to direct any disagreement with the results of the Venezuelan elections through the appropriate channel.

“They have every right to establish a challenge to the facts they have placed on the table, it is part of the democratic exercise and this challenge will have to be substantiated through the channels contemplated” in the National Electoral Council (CNE) ), Zapatero said in an interview with Efe.

“Elections are held one day but the next day the future of Venezuelans is at stake,” Zapatero explained, adding that it is important to sit down to dialogue because peace is above any situation.

The former secretary general of the Spanish Socialist Workers Party said: “tomorrow we have a government in Venezuela, an opposition, some very important economic problems, social problems that will surely need changes by of all.”

The former Spanish Prime Minister stated that from his “perspective there has to be a principle of responsibility of the political forces, starting… by President Maduro to do everything necessary for a dialogue and an agreement.”

Former Venezuelan presidential candidates, ex-Governor Henri Falcon and Javier Bertucci have made accusations of more than 1,000 irregularities during the polls and called for a repeat of the elections.