‘You don’t have any rights’: CBP agents interrogate US citizen and seize his phone after Venezuela solidarity trip 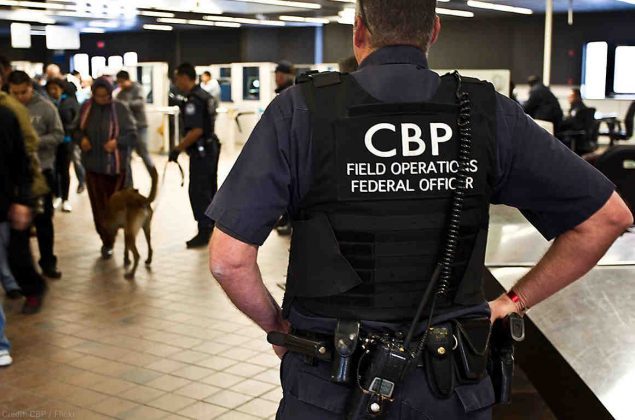 This story, which has unsurprisingly attracted no attention from the MSM, is about the detention of a US citizen returning from Venezuela and can clearly be seen as an extension of the US government’s efforts to punish citizens who have protested its policy of regime change and economic warfare.

A US citizen has told The Grayzone that the United States Customs and Border Protection (CBP) service detained him on his way home from Venezuela and violated his privacy.

Sergio Lazo Torrez, a 31 year-old Nicaraguan-American, said the CBP forced him to open his cellphone, grilled him about his political beliefs, and demanded information about his contact with Venezuelan President Nicolas Maduro.

Torrez was returning to the Washington, DC area on the evening of August 2 when he was detained by CBP at Dulles International Airport in Vienna, Virginia. He had just participated in a week-long tour of Venezuela with over a dozen US citizens, including this journalist and two other reporters for The Grayzone.

During the trip, the group met with members of local social movements, leaders of workers’ cooperatives, artists, and elected officials. On August 1, the visitors accepted an invitation to meet with Maduro at the Miraflores presidential palace in Caracas.

The meeting apparently triggered the US government’s decision to target Torrez.

Like the other US citizens on the trip to Venezuela, Torrez had participated in the Embassy Protection Collective this April and May.

For over a month, peace activists residing in the Venezuelan embassy in Washington, DC obstructed the seizure of the facility by the US-backed coup administration of opposition leader Juan Guaido. They were besieged for almost two weeks by a mob of right-wing Guaido supporters, who bombarded them with racist, sexist, and homophobic invective.

On May 16, the four final embassy protectors were removed by force by federal agents. They now face prosecution in federal court and possible penalties of one year in prison and $100,000 fines. 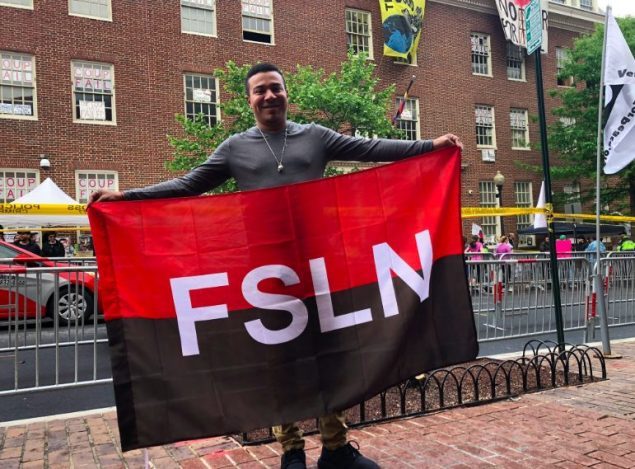 The detention and interrogation of Torrez was an apparent extension of the US government’s efforts to punish citizens that have protested its policy of regime change and economic warfare against Venezuela’s elected government.

“They kept asked me what kind of relations I had with Maduro and I just said I had none,” Torrez recalled. “[The CBP officer] was like, ‘What was the conversation with him about?’ I said, ‘I just shook his hand and said hi. That’s all I did.’ And they were like, ‘You have pictures with all these people from the government, all these officials.’ And I was like, ‘Yeah it was a picture. We didn’t need to have a conversation.’”

“I think they targeted me for being Latino”

Torrez said that soon after he landed at Dulles, he was subjected to a secondary security check. Then, two CBP officers burst out of a room and summoned him inside. He had been traveling with several other members of the Embassy Protection Collective, but was the only one subjected to an interrogation.

“I think they targeted me for being Latino,” Torrez said. “There were no [white] Americans in the waiting room. And I was one of two Latinos in our group.”

Inside the interrogation room, Torrez said a Latino officer addressed him in Spanish and demanded to know how long he had been a US citizen. From there, the agent began grilling him about his political views, asking if Torrez had any relationship with the Nicaraguan government or had represented Nicaragua at the Sao Paolo Forum that took place this month in Venezuela.

The Sao Paolo Forum is an annual gathering of leftist forces from across the Western hemisphere, and has been caricatured as a confab of terrorists and communists by right-wing Latin American political figures and neoconservative Florida Senator Marco Rubio.

Torrez said he told the CBP agent, “Nope, I don’t belong to any organization.”

“They were trying to go after me in every way possible,” he recounted. “They asked me how long I was married, if I belonged to any military organizations. I said no.”

Then, according to Torrez, the CBP asked him if he supported Maduro: “I said I didn’t vote for Maduro because I’m not Venezuelan, and I don’t comment on foreign politics.”

Torrez told The Grayzone that the officers kept pumping him for info on Maduro, demanding to know if he was friends with the president. Again, he said no. “So they said to me, ‘Why did Jorge Ramos get kicked out of Miraflores when you didn’t?’”

Ramos is the Univision ambush journalist who was briefly held at Venezuela’s presidential palace in February and deported after a hostile 20-minute-long interview in which he attempted to humiliate Maduro, opening the encounter by denouncing the president as a dictator.

Next, the CBP officers asked Torrez if his trip had been organized by Venezuela’s embassy: “I said, no, we don’t even have a Venezuelan embassy any more in the United States.” He also explained to his interrogators that the trip had not been financed by Venezuela’s government, but instead by peace groups operated and supported by US citizens.

“They started going through my browser”

When Torrez refused to open his phone for the officers, he said they seized it from him and took it into a separate room for five minutes. He does not know what they did to the phone while it was out of his sight.

Torrez recalled the CBP officers warning him that they could detain him for an extended period for refusing to cooperate. “They were being really intimidating,” he recalled. Eventually, he agreed to their demand to open his phone.

“They started going through my browser,” he said. “They opened my WhatsApp but they didn’t click on the messages. They did write down the email connected to my phone.“

According to journalist Seth Harp, who was detained and had his cellphone searched by CBP while returning from a trip to Mexico City, the CBP justifies invading the privacy of travelers through its Directive No. 3340-049A. This provision permits agents to search anyone’s device without any probably cause.

Those who refuse to relinquish their devices can have them seized. CBP authorizes its agents to use surveillance technology to “not merely to gain access to the device, but to review, copy, and/or analyze its contents.”

Torrez said that throughout his interrogation by CBP, the officers were holding a document containing information about participants in the Embassy Protection Collective who had traveled to Venezuela. “They have all the info already about the Collective,” he noted. “On a piece of paper they had the names of everyone in the collective. And they asked if we were all traveling together.”

At 11:50 PM, after two hours of waiting and interrogation, Torrez said he was set free. But unlike his travel companions, he was told his bags had mysteriously not arrived.

The CBP has not responded to an email from The Grayzone seeking a comment on the detention of Torrez.

“It’s funny how they criticize Maduro and [Nicaraguan President] Daniel [Ortega], and talk about dictatorship and harassment, saying that Daniel or Maduro are persecuting people all the time,” Torrez reflected. “But in reality, we’re the ones being harassed over here for just thinking differently than the government.”

Max Blumenthal is an award-winning journalist and the author of several books, including best-selling Republican Gomorrah, Goliath, The Fifty One Day War, and The Management of Savagery. He has produced print articles for an array of publications, many video reports, and several documentaries, including Killing Gaza. Blumenthal founded The Grayzone in 2015 to shine a journalistic light on America’s state of perpetual war and its dangerous domestic repercussions.