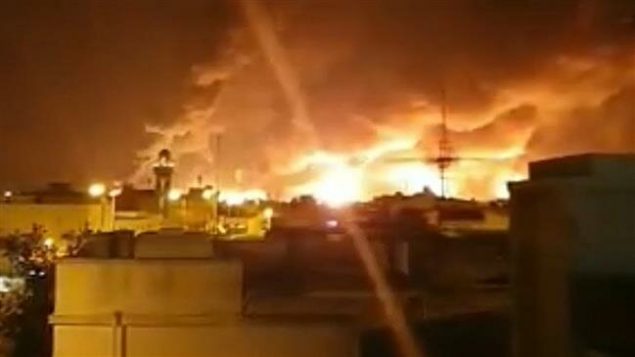 Yemen’s military has warned foreigners in Saudi Arabia to leave Aramco’s oil processing plants, saying they are still a target and can be attacked “at any moment.”

The warning came after Houthis and their allies in the Yemeni army deployed as many as 10 drones to bomb Abqaiq and Khurais oil facilities run by the Saudi state-owned oil company before dawn Saturday.

Spokesman for the Yemeni armed forces, General Yahya Sare’a, said in a tweet Monday that the attacks in the kingdom’s eastern region had been carried out by drones with normal and jet engines.

He said Saudi Arabia should stop its “aggression and blockade on Yemen,” or see the Yemeni army hit the kingdom “anywhere and anytime” it chooses.

Other Yemeni officials dismissed claims that the country is incapable of carrying out on its own the kind of attacks that targeted two plants at the heart of Saudi Arabia’s oil industry.

Mohammed al-Bukhaiti, a member of Yemen’s Supreme Political Council, pledged that Yemeni forces will continue to pound the Saudi oil industry until the kingdom ends its deadly war.

The unprecedented attack knocked out more than half of Saudi crude output, or 5% of global supply, prompting Saudi and US officials to claim without any evidence that it probably originated from Iraq or Iran.

Bukhaiti told Iran’s Tasnim news agency that blaming the attacks on other countries shows “cowardice” in facing up to the reality of Yemen’s military power.

“Saudi Arabia declared war against Yemen on the grounds that our missile inventory posed a threat to its security,” he said. “Today, we are surprised to see that when we hit Saudi oil wells, they exonerate Yemen from conducting these strikes and accuse others of doing them.”

“This is viewed as an own criminal decree of conviction. It also shows their cowardice,” Bukhaiti added.

US Secretary of State Michael Pompeo was quick to blame Iran for the brazen attacks, claiming there was no evidence the drones had originated from Yemen.

Bukhaiti mocked the proposition, saying Washington resorted to such rhetoric to hide the fact that their radars were simply incapable of tracking Yemeni drones.

“America and Saudi Arabia’s radars cannot intercept Yemeni aircraft. If they could intercept them, they would have shot them down,” he argued.