Worst day yet: Deaths surge and surpass 30,000 in Europe 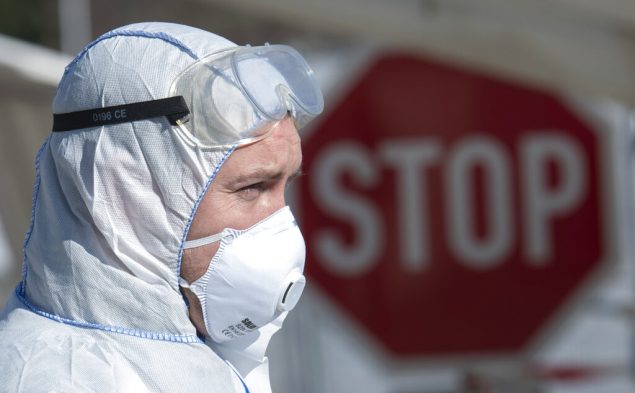 With the deadly new virus spreading and killing ever more of its citizens, Europe is girding itself for a prolonged fight against a virus that has brought nearly all of Europe to a standstill and forced the cancellation of many of Europe’s most cherished events and traditions.

The death toll in Europe from the coronavirus pandemic surged past 30,000 people on Wednesday as Spain, Italy, the United Kingdom, France, Germany and the Netherlands each reported hundreds of new deaths.

It was the single worst day yet for Europe with more than 3,000 deaths.

With the deadly new virus spreading and killing ever more of its citizens, Europe is girding itself for a prolonged fight against a virus that has brought nearly all of Europe to a standstill and forced the cancellation of many of Europe’s most cherished events and traditions.

On Wednesday, Wimbledon, a highlight of summer in Europe, was canceled for the first time since World War II and governments are now telling their citizens they will have to stay indoors until at least past the Easter holidays, a moment of intense celebration across Europe.

“A pandemic does not take a vacation,” German Chancellor Angela Merkel told reporters after announcing restrictions on public meetings in Germany will extend past Easter.

Sweden is the last major Western European country not to impose a lockdown and its citizens remain largely free to go about their daily lives, though large gatherings are banned. Swedes have been told to act responsibly. So far, the country has recorded more than 4,947 coronavirus cases and 239 deaths. There are fears that this laid-back approach will lead to a surge in infections in Sweden.

The reality in a growing number of countries is that the virus, and the Covid-19 respiratory disease it causes, is bringing unbelievable misery as deaths mount, hospitals struggle with a flood of patients and fear spreads.

For the fifth straight day, Spain reported more than 800 fatalities over a 24-hour period. On Wednesday, it said 864 people had died, a new high number. The virus has now killed 9,053 people in Spain and infected about 94,400 people. The virus is hitting Madrid the hardest, but Catalonia is also seeing an increase in cases.

Italy reported 727 new deaths and 4,782 new confirmed cases, both of which, though terribly grim, are figures giving Italian authorities hope that the outbreak is slowly being contained after 22 days of a nationwide lockdown, the longest in Europe. So far, more than 110,500 people have contracted the virus and 13,155 people have died in Italy. The country’s northern region of Lombardy is the hardest hit.

Death tolls are likely higher in Italy and other countries, such as France, because not all those who die are tested for the virus, in particular if they die at home.

Wednesday marked the worst day yet for the United Kingdom, which announced 563 new deaths for a total of 3,352 fatalities. More than 29,400 people have been infected with the virus there. London is the heart of the outbreak though other areas, such as the Midlands, are hard hit too.

France also registered its worst day yet with 509 deaths, raising its death toll to 4,032. More than 6,000 patients are in intensive care in France too, an indication of just how many more people are fighting for their lives. The eastern region of Grand Est, along the border with Germany, is the hardest-hit region.

As the pandemic worsens, world agencies are urging nations to cooperate and fend off food shortages, catastrophic outbreaks in poorer countries, devastating poverty and other disastrous consequences.

On Wednesday, the United Nations’ Food and Agriculture Organization, the World Health Organization and the World Trade Organization warned about the possibility of food shortages if the crisis is improperly handled.

“Uncertainty about food availability can spark a wave of export restrictions, creating a shortage on the global market,” the global agencies said in a statement.

The closing of borders across the world has disrupted the delivery of supplies and supermarkets in many countries have seen their shelves emptied due to panic buying. There are also concerns about a slowdown in production as lockdowns keep workers at home.

In France, the government called on unemployed and temporary workers to head to the countryside to help with seasonal harvests typically done by migrant workers from North African countries and Spain who now can’t get to France after the EU’s external borders, and many internal borders, were closed last month. Farm unions estimate about 200,000 farm hands are needed.

On Tuesday, U.N. Secretary-General Antonio Guterres warned the pandemic is humanity’s worst crisis since World War II and he called on nations to work together to prevent making the world even more unstable.

“We are facing a global health crisis unlike any in the 75-year history of the United Nations – one that is killing people, spreading human suffering, and upending people’s lives,” a U.N. report warned.

On Wednesday, Dr. Tedros Adhanom Ghebreyesus, the WHO director-general, said he was “deeply concerned” about the rapid spread of Covid-19 across the globe and its growth in less developed countries in Asia, Africa and the Americas.

He urged less developed nations to take measures to help their populations and praised India for offering its citizens cash transfers, free cooking gas and other forms of help.

“Many developing countries will struggle,” he said.

To ease the suffering in less developed parts of the world, Dr. Tedros urged richer countries to provide debt relief.

“Debt relief is essential to enable them to take care of their people,” he said.

Main Photo: Corporal Mathias Jahn, left, member of the German armed forces Bundeswehr, stands in front of a mobile coronavirus test station and demonstrates his work in a test run after a press conference at a drive-through (drive-in) COVID-19 testing center in Gera, Germany, Wednesday, April 1, 2020. The appointment-only drive-through testing center began twelfe days ago. Medical staff reach into a car to take a nasopharyngeal swab from a patient. For most people, the new coronavirus causes only mild or moderate symptoms, such as fever and cough. For some, especially older adults and people with existing health problems, it can cause more severe illness, including pneumonia. (AP Photo/Jens Meyer)