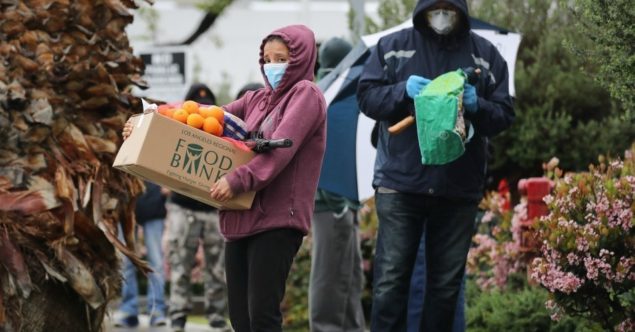 A recipient carries a box of food as others wait in line at a Food Bank distribution for those in need as the coronavirus pandemic continues on April 9, 2020 in Van Nuys, California. (Photo: Mario Tama/Getty Images)

This week, as millions edged even closer to the precipice of economic ruin, hunger, sickness and death, Senate Republicans returned with a proposal that would leave citizens and states with fewer protections and funds. At the heart of the current deliberation is a disdain for the poor, and for life itself, that is not new but rather an escalation of the federal response to the coronavirus so far… The US Government’s abandonment of the people is sin of the highest order.

By Rev. Dr. William J. Barber II, Rev Dr Liz Theoharis
Published on Common Dreams, Aug 2, 2020
_____________________________________
On Monday, August 3, faith leaders with the Poor People’s Campaign will flood Majority Leader Mitch McConnell and the Senate with calls saying that it is treacherous and heretical to hold up the Constitution and the Bible while trampling on the right of every person to life, liberty and the pursuit of happiness. We demand a true relief bill, one that guarantees healthcare and an adequate income, protects housing, water and utilities, and prioritizes the needs of all people, especially the poor, not the wealthy and corporations.

Indeed, our government’s abandonment of the people—in the midst of the greatest public health crisis in a century and an economic downturn that could rival the Great Depression (it was just announced that US GDP fell by annualized rate of 32.9% in the second quarter of 2020, the greatest collapse of the US economy in a single quarter in history)—is sin of the highest order. The ancient words of the Prophet Isaiah ring with unnerving relevance today: “Woe to you who legislate evil, who rob the poor of their rights, making women and homeless children your prey.”

This week, as millions edged even closer to the precipice of economic ruin, hunger, sickness and death, Senate Republicans returned with a proposal that would leave citizens and states with fewer protections and funds. At the heart of the current deliberation is a disdain for the poor, and for life itself, that is not new but rather an escalation of the federal response to the coronavirus so far.

Yes, the first four pieces of pandemic legislation included measures that have helped keep millions afloat. But that relief was temporary and threadbare. In March and April, Congress, buoyed by Sen. Mitch McConnell, was all too willing to quickly push through stimulus packages that prioritized hundreds of billions of for the wealthy, corporations and the military. This came after the Fed had already injected $1.5 trillion to Wall Street, while leaving tens of millions to fend for themselves.

As leaders in Congress still debate the merits of masks and suggest that this virus will somehow just go away, McConnell casually stalls and belittles, telling the country that our response should be “tailored and targeted”. He continues to double down on a politics of austerity—proposing $200 unemployment benefits instead of $600, funds for legal help in the case of evictions rather than an extension of the federal moratorium on evictions or any form of rent cancellation, and a liability shield for corporations who are knowingly endangering people by forcing them back to work while not even increasing pay for millions of low-wage workers.

Republican Senators have put out hateful lies blaming poor people for the nation’s botched pandemic response. On the other side of the aisle, Democratic House Majority leader Steny Hoyer has already conceded that they’re willing to sign a bill with slashed unemployment protections, going so far as to repeat the old anti-poor talking point that more robust welfare spending might actually dissuade people from working, as the country faces historic levels of unemployment. Why is it that when the rich are in need they’re never told they’re asking for too much, but when the poor ask for the right to survive, they’re met with denigration cloaked in the language of sober pragmatism?

We’re in uncharted territory. There have now been nineteen consecutive weeks of unemployment claims over 1 million, each week more than double the single worst week of the 2007-2008 crisis; the Department of Labor reports that over 35 million workers are either on unemployment benefits or have applied for them. This job crisis has devastated Black workers in particular, but it has also wound its way into every corner and community in the country.

What this will mean for American life in the years ahead is catastrophic. Already, over 27 million people have lost their employer-sponsored insurance during the worst health crisis in at least a century, joining the 87 million people who were already uninsured or underinsured. In June, 30% of all homeowners and renters failed to make housing payments and massive waves of evictions are projected for the late summer and fall, hitting undocumented folks, poor renters and people of color first and worst.

A study back in March found that if poverty and unemployment reached Great Depression levels, 9.9 million people could join the over 37 million who faced food insecurity in 2018; a “more extreme scenario” would raise hunger by over 17 million. It may be hard to believe, but four months later, we’ve now surpassed even that dire metric.

Before the pandemic hit, we were a nation riven by poverty and inequality: 140 million of us were poor or low-income. Now, the complete failure of leadership in our highest offices have given us the largest COVID-19 death toll in the world, as well as spiking numbers at a time when other nations, in both the Global North and South, are curbing new cases. And while this virus may eventually be tamed, our government’s negligence will likely leave us with years of historic suffering and even longer-lasting wounds.

This will certainly be true if we continue down the path laid out by McConnell and a Congress obsessed with policy tinkering, one that haggles over the scraps of what millions of Americans actually need to live. This is a time of staggering danger – but also, if we allow it, enormous possibility, which should be met with unbridled imagination and absolute seriousness. Now is the moment when we must challenge the death measurement that is found in every form of our public policy.

These are the true stakes today. What the prophets of the Bible have warned empires before. Do we choose life or death?

Rev. Dr. William J. Barber II is national president and senior lecturer of Repairers of the Breach. His latest book is The Third Reconstruction: How A Moral Movement is Overcoming the Politics of Division and Fear.