Last month, Maxim Grigoriev, the Director of the Foundation for the Study of Democracy, presented the 250-page study “White Helmets: Terrorist Accomplices and a Source of Disinformation.” He initially presented his research at an event held by the Russian Mission to the UN on the sidelines of the UN Human Rights Council in Geneva on March 12th.

It seems that Russia has started apparently late, but still important efforts to counter the White Helmets propaganda narrative in Syria.

The Director of the Foundation for the Study of Democracy, Maxim Grigoriev, presented the 250-page study “White Helmets: Terrorist Accomplices and a Source of Disinformation,” on April 25th, 2019. He initially presented his research at an event held by the Russian Mission to the UN on the sidelines of the UN Human Rights Council in Geneva on March 12th.

According to the aurthor, the research is primarily based on witness testimonies and concludes that the White Helmets NGO is in no way a group of volunteers upholding human rights. He did so by travelling to Syria and interviewing residents and former White Helmets members in Aleppo, Eastern Ghouta and other locations

Grigoriev said that nearly everyone on the staff of the White Helmets were salaried personnel with monthly food rations. Organizationally, the White Helmets is a centrally managed paramilitary organization with a system of punishment for personnel if they fail to comply with the orders of their group leaders.

He said that researchers from his foundation spent over three months in Syria interviewing Syrians, who “talked with them openly, giving names and indicating the sites where the footage of the White Helmets’ staged rescue operations was made.”

The research says that many known members of militant groups were working for the White Helmets and were even chairing some of the group’s local centers in Syria.

“The Western countries that financed of the White Helmets actually financed terrorist organizations and illegal armed groups and their operations,” Grigoriev said.

Furthermore, the report concluded that the White Helmets had special units that were primarily engaged in producing fake news and staged footage. The White Helmets leaders and staff misappropriated the funds allocated by the Western countries, plundered shops and flats, as well as stole valuables from the dead and wounded.

In total, 15 witnesses from Douma at the site of the April 7th, 2018 incident were interviewed. 40 members of the White Helmets who provided a detailed description of the methods commonly used by the organization to carry out staged footage.

Furthermore, more than 25 people who witnessed the White Helmets stage the chemical attacks were also interviewed.

Following are some of the testimonies from witnesses on-site:

Doctor Hassan from the Douma Hospital, where the infamous footage that the White Helmets released was shot: 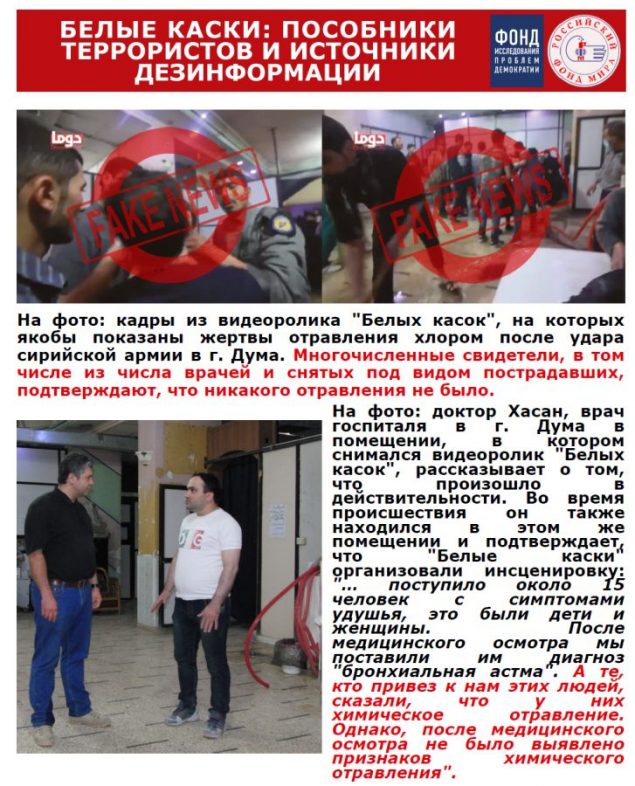 “On 7 April 2018, about 15 persons were admitted with suffocation symptoms. Those who brought us these people told that they had chemical poisoning. But the medical examination revealed no signs of chemical poisoning. We provided them with simple medical aid and let them go home.”

Testimony from people who were part of the alleged Chemical attack in Douma and Aleppo in one way or another: 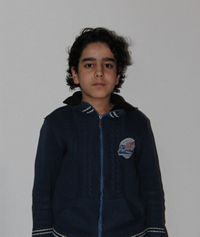 “When I lived in Douma, Abu Feraz asked me and my friends: “Care for a city ride?” The five of us went with him. He took us to a medical center where WH members also were. The doctors covered us with white blankets, told to close our eyes and filmed us as for a movie. I was paid 200 liras. Next time Abu Feraz told my mother: “We need to film and you may take part and earn some money.” 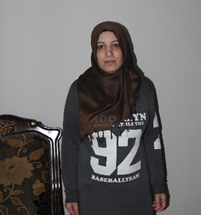 “A man approached me with a proposal to be in the films. I was offered the role of a woman who died in a chemical attack. I was taken to a flat and given white prayer clothes. I was then told to lie down and smear my mouth with toothpaste, playing dead in a chemical attack. He gave me about 10 dollars in the evening.” 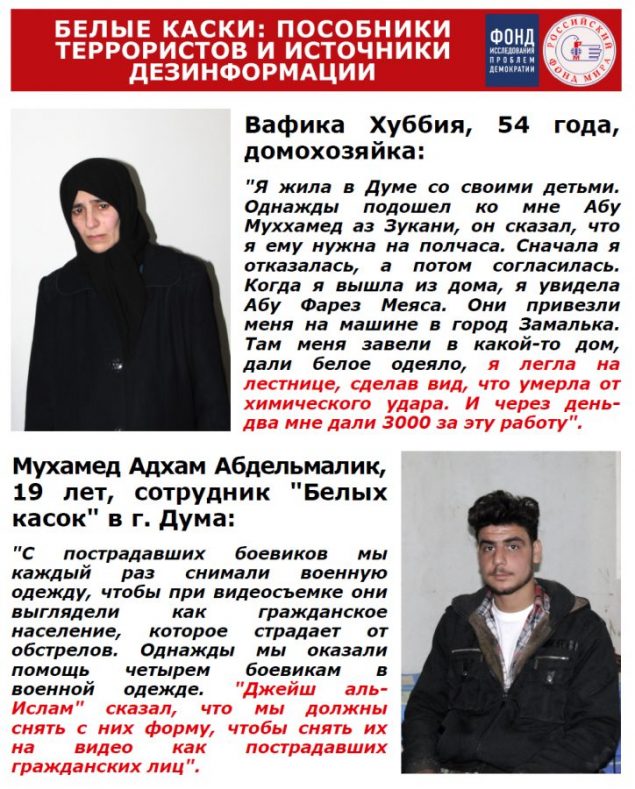 “I was brought by car to the city of Zamalka and taken to a house. I was given a white blanket, I lay down on the staircase feigning death in a chemical attack. In a day or two I got 3000 for this job.”

According to him, injured and dead militants had their military clothing removed so that it appears as if they were civilians suffering from the shelling. One day, they were helping four militants dressed in military uniforms. Jaysh al-Islam told us that they must take their uniforms off, so that a video can be shot of them helping injured civilians. 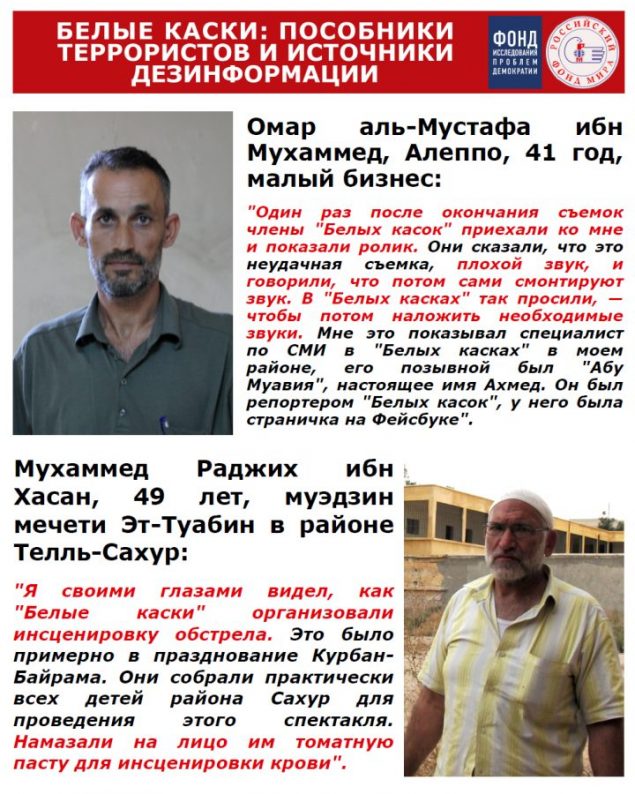 “They staged a chemical attack as follows: they brought children, put them on the floor, simulated the use of chemical weapons, put gas masks on, pushed civilians away, poured water over alleged corpses before them, like the children died in the chemical attack. I saw this with my own eyes.”

“When they shot the footage, members of the White Helmets came and showed it to me. They said it was a bad shot and that the sound was really poor, but they would put their own sound later.”

He was also introduced to Abu Muavia, also known as Ahmed who was a reporter for the White Helmets and had a Facebook page.

“I saw with my own eyes how the White Helmets organized the fake attack. It was made to seem like it was a sort of celebration for the Eid al-Adha. They practically gathered all the children in the Sahur area to join “the show.” They covered the children’s faces with tomato paste to present it as fake blood.” 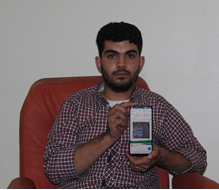 “There were 8 small children in the street, they gave them candies and told they wanted to play with them. Then they dusted the children with white stuff, seated them in minivans and took to the Hospital. There they filmed the children saying that the children had suffered a chemical attack.” 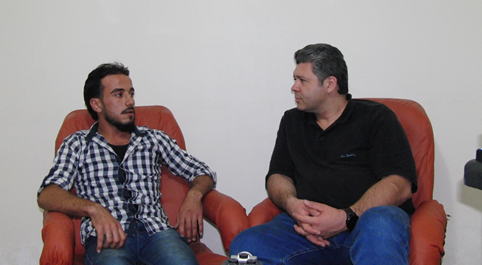 “We were told that there were victims of the chemical attack, so we should go there. We went there and saw that everything was fine, nothing special, just a fire, but the White Helmets were taking pictures, filming everything and said that those were the consequences of a chemical attack.” 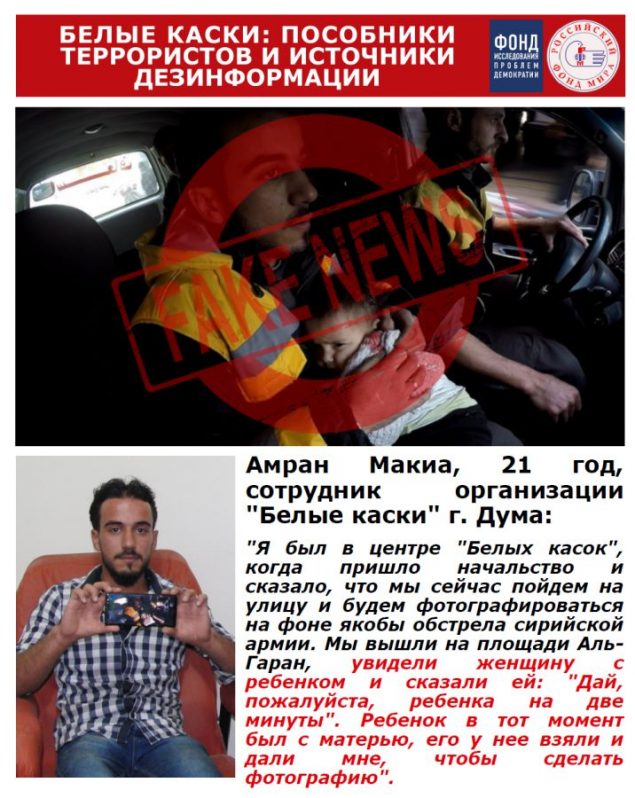 Amran was at the White Helmets center in Douma, when the leaders called him and others to immediately go out on the street and take photographs against the alleged shelling of the Syrian army. They went out to al-Garan square and we saw women with their children. They asked the women to let go of their children for a little bit, so that they can take photographs of them and make them more dramatic. 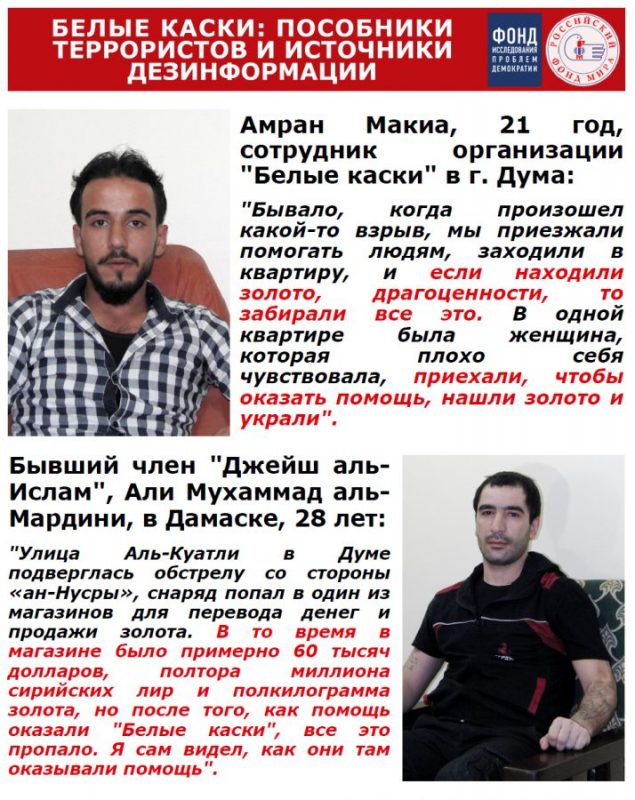 Amral said that when there were explosions and they went to “help” in homes they would take any gold and valuables they found. In one of the homes there was a woman who felt unwell, so the White Helmets helped her, then returned to take the gold and the valuables from the house.

“Al-Quatli street in Douma was under fire by al-Nusra, a shell fell in a store that exchanged money and sold gold. At that moment, the store had approximately $60,000, several million Syrian lira and half a kilogram of gold, but after the White Helmets went to help all of that was gone. I personally saw how they help people.”

“The White Helmets always disseminated information according to which the authorities had used chemical weapons. It was not true: in fact, we as the inhabitants of that district had never seen or heard of a child that had become victim of a chemical attack.” 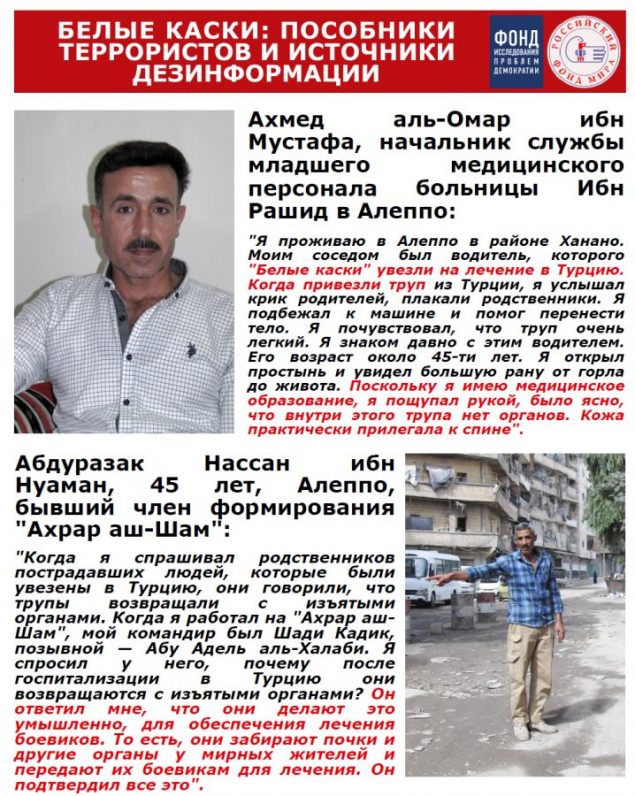 His neighbor was taken to Turkey for treatment by the White Helmets. A few days later the man passed and was returned to Aleppo. Ahmed went to help them carry out the corpse from the car, while all his relatives were crying. The corpse was too light, he pinched the corpse’s hand and the skin was practically just stuck to the bone, its organs had been taken out.

“From 10 to 15 White Helmets employees took part in this staging. They gathered area people, poured them over with water and began to cry that the Syrian authorities had used chemical weapons. This was not the case, this was just the smell of household chlorine, and the people stood staring around.  The White Helmets members had neither gas masks nor gloves on them.”

He further said that when civilians died, or were taken “for treatment to Turkey,” and sometimes they would die. When the corpses were returned they would almost always be missing some, or all of their organs. 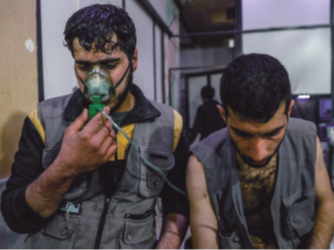 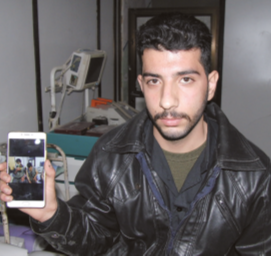 He was a former White Helmets employee, who was in a picture from a report published by Time Magazine.

“We brought one family to the Douma Hospital, representing things as if the Syrian army had used chlorine, but there was actually no gas. I was told to sit down on a bed and hold an oxygen mask on to get the required shot.”

The authors of the report used these testimonies in addition to other analysis of photographs and information contained in the OPCW Report of the fact-finding mission regarding the incident of alleged use of toxic chemicals as a weapon in Douma, Syrian Arab Republic, on April 7th 2018, to reach the conclusion that the White Helmets were in fact staging these attacks.

Surely enough, at least the experts and witnesses are named, while in the OPCW report all of the cited sources remain anonymous.