With Turkey’s invasion of Syria, concerns mount over nukes at Incirlik 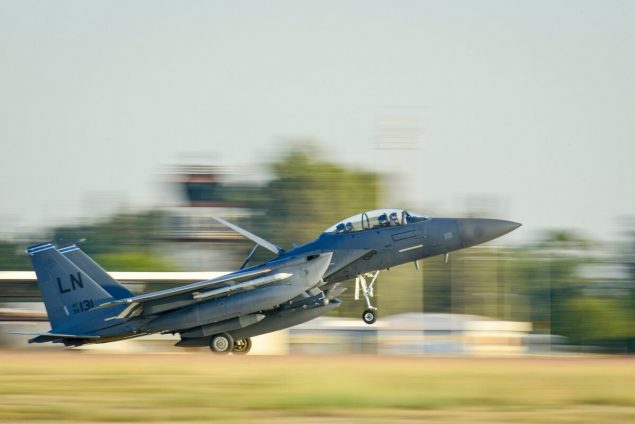 A U.S. Air Force F-15E Strike Eagle lands at Incirlik Air Base, Turkey, in November 2015. The deteriorating relationship between the U.S. and Turkey has led to concerns about the nuclear weapons reportedly housed there. (Airman 1st Class Cory Bush/Air Force)

Concerns are growing over the reported presence of U.S. nuclear weapons at Incirlik, believed to be about 50 B61 gravity bombs. Last week the New York Times reported that officials from the State and Energy departments had reviewed plans for evacuating the nuclear weapons there.

The Air Force on Monday said it has made no changes to daily operations at Incirlik Air Base in Turkey even as Turkish forces continue to push into Syrian territory, which has prompted U.S. forces to pull back.

But concerns are growing over the reported presence of U.S. nuclear weapons at Incirlik, believed to be about 50 B61 gravity bombs. The New York Times on Monday reported that officials from the State and Energy departments over the weekend reviewed plans for evacuating the nuclear weapons there.

Not surprisingly, Air Force spokeswoman Ann Stefanek would not answer questions about possible nuclear weapons at Incirlik and whether they would be moved in a Monday email.

“The mission of the 39th [Air Base Wing at Incirlik] is to provide persistent surety and continuous air operations for the U.S., our allies and our partners and helps protect U.S. and NATO interests in the Southern Region by providing a responsive and operational air base ready to project integrated, forward-based airpower,” Stefanek said. But she stated there have been no daily operations changes at the base.

A senior official reportedly told the Times that the weapons “were now essentially [Turkish President Recep] Erdogan’s hostages” since removing the weapons would effectively spell the end of America’s alliance with Turkey, but keeping them there would leave them vulnerable.

The situation with Turkey, a NATO ally, has become increasingly volatile as Turkish forces tore into the Kurdish-led Syrian Democratic Forces after the U.S. pulled back and abandoned them.

A suspected Turkish artillery strike also landed about 300 meters from a U.S. commando outpost near Kobani, Syria, on Friday. Some troops and artillery experts believe the artillery strike was intentional, as the Turkish military had detailed grid coordinates showing them where American troops were. The Washington Post quoted a knowledgeable Army officer as saying artillery rounds had been fired on both sides of the outpost, creating a “bracketing effect.”

Seriously, it’s time to take our fucking nuclear weapons out of Turkey. https://t.co/DDK6EF208h

The presence of nuclear weapons at Incirlik, though never publicly confirmed or denied by the U.S. government, has long been essentially an open secret. It became even less of a secret earlier this year when a Canadian senator published, apparently by accident, a document containing the bases where the United States is keeping nuclear weapons.

In an interview this summer with Air Force Times on the future of Incirlik amid rising tensions with Turkey, former Air Force Secretary Deborah Lee James would not confirm or deny the presence of nuclear weapons there. But, hypothetically speaking, she said that if nuclear weapons did have to be removed from that base, it would be a complicated operation. It would require negotiations with the nation that would become the weapons’ new host, James said. And it would require a great deal of logistical and security work.

If the Air Force found a new nation willing to host the nukes, James said, it would have to take “the greatest of care” in their removal and transport. If the receiving base did not have the facilities or security necessary, James said, it would require a significant construction effort. And NATO would likely be involved.

“Any time nuclear weapons are moved from point A to point B, it is a major logistical challenge,” James said. “The security is enormous that goes with this.”

The question of whether nuclear weapons should remain at Incirlik took on greater urgency following the 2016 coup attempt in Turkey, during which the air base’s power was cut off by Erdogan’s government.

Concerns have only increased along with tensions between Ankara and the rest of NATO, especially as Turkey decided to accept a Russian-made S-400 air defense system in July. The U.S. and other NATO allies are concerned that Turkey’s use of the S-400 could jeopardize secrecy on the F-35 and it’s stealth capabilities.

Bringing a Russian system into the alliance could lead to data leaks and security breaches and give the Russians critical information about the F-35. And flying U.S. Air Force F-35s so close to the S-400 would make it easier for the Russians to gather data on their stealth and other capabilities.

Days after Turkey accepted the S-400, the U.S. booted the nation from the F-35 program. In response, Russia offered to sell Turkey its upgraded Su-35 fighters, and Turkey threatened to attack then-U.S.-allied Kurdish units in Syria.

Aaron Mehta of Defense News contributed to this report.