With the right-wing coup in Bolivia nearly complete, the junta is hunting down the last remaining dissidents 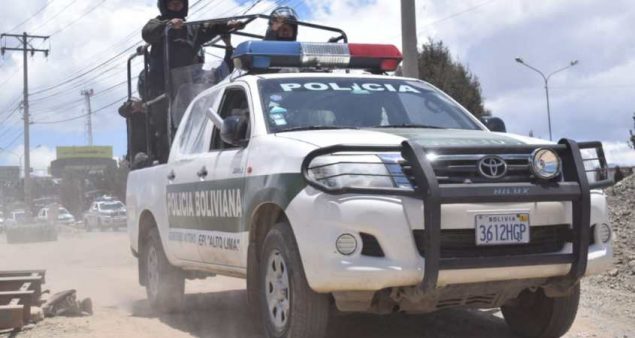 Bolivia: Coup regime police out on the hunt

On the day of my scheduled interview with a leftist Bolivian journalist, I learned that he had been disappeared. Every outspoken opponent of the military junta is a target and subjected to charges of sedition.

A brutal military junta that seized power from Bolivia’s democratically elected President Evo Morales is violently repressing a working-class indigenous-led uprising, and the country is rapidly falling under its control.

Soldiers in military fatigues prowl the streets, enforcing a series of choke points around the seat of power. Anyone perceived as standing against the status quo is now subject to being arrested on charges of sedition or terrorism. Dissident journalists and Morales sympathizers have been forced into hiding, leaving the house only when necessary.

“It’s a fascist dictatorship, there’s no hiding it,” says Federico Koba, a left-wing journalist who asked that I not use his real name for fear of arrest. “There are paramilitary agents going around the city taking pictures and pinpointing who’s who. Who is a leader, who is recording the protests, who is recording the repression.”

I met with Koba, an activist and journalist with the leftist news site La Resistencia Bolivia, on the evening of November 24th. I had initially planned to meet with his co-worker, who asked that I refer to him by the pseudonym of Carlos Mujica because he too feared being jailed for his activism.

But on the day of our scheduled interview, Mujica never showed up. He was lying low, having had his house searched and ransacked by police the night before the coup.

Hours later, I received a brief message from him: “Bro, I can’t talk right now. I’m in jail.”

Mujica’s friends went to every prison in the city looking for him, but he was nowhere to be found. The next day, he was released after an intense interrogation session in an unlisted facility. He immediately went into hiding, disconnecting himself completely from social media, which his peers now believe has been compromised by the coup regime.

The atmosphere was grim when I met with Koba and some of his colleagues. “We know for sure we’re on a list – we’ve seen it, and what they did to Carlos confirms it,” one member of La Resistencia told me.

After the interview with Koba, he waved off my suggestion that we get a beer.

“Maybe someday, after all this is over, we can do that,” he said. So we drove around under the cover of darkness instead, doubling back and making frequent turns to make sure we weren’t being followed.

“That truck could belong to the cops, or the paramilitaries,” he remarked, as we circled a roundabout multiple times to allow it to pass. 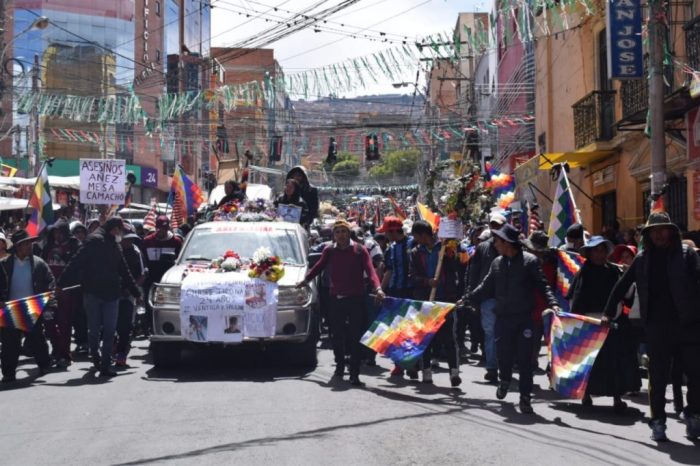 “Not a single shot was fired”

Since their country was taken over by far-right landowning elites, virtually every leftist Bolivian with a public profile has begun to feel the heat. Even relative newcomers to politics bear the scars of repression.

Minutes after I met another Bolivian citizen journalist, who had first picked up a camera just weeks before, as the coup kicked off, he hiked up his pant leg to show me the wound he’d sustained the day before. He had been shot with a rubber bullet while documenting the military’s offensive against the residents of El Alto. 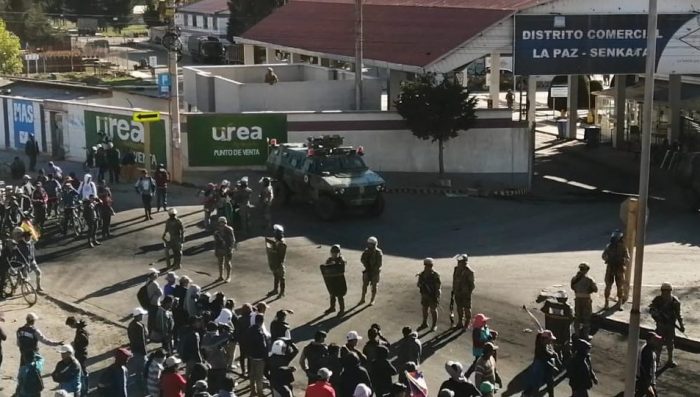 Days after the coup sent Morales into exile, residents of the mostly indigenous working-class city of El Alto encircled a gas plant called Senkata, cutting off the nearby Bolivian capital of La Paz from its main source of cooking gas. In response, the same military and police forces that had conspired with fascist paramilitaries to force Morales from office unleashed a ferocious wave of violence on the largely unarmed protesters.

I arrived just after the worst of the massacre. The “terrorists” – as the Bolivian military junta and press have dubbed the self-organized patrols of mainly unarmed indigenous youth and mothers – were decidedly less violent than one might expect. Instead of the guns and dynamite which coup-supporting Bolivians insist they wield, I saw only cell phones and polleras, the traditional dresses worn by many of Bolivia’s indigenous women.

But that did little to prevent them from being mowed down over the course of several hours. While the official death toll from the Senkata massacre now stands at nine, a seemingly endless series of victims’ family members told the OAS’ Inter-American Commission on Human Rights (CIDH) that the real number was most certainly higher, as many as 25 deaths.

Their harrowing testimonies painted a picture of unhinged soldiers firing at random out of helicopters and from sniper perches. Mothers sobbed as they held up photos of their children. Many had been gunned down as they went to or from work; still more had simply disappeared.

Nearly a week later, their families are beginning to assume that they were killed by soldiers, who subsequently hid the bodies in order to lower the official number of casualties. 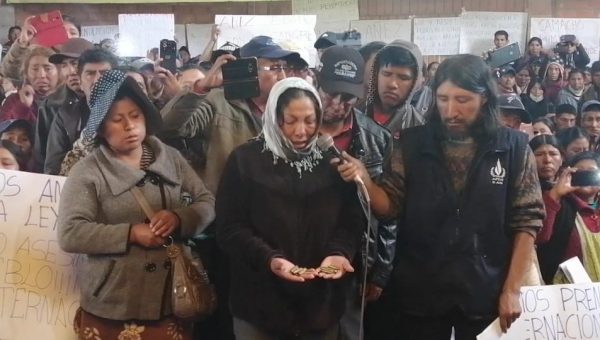 But the military junta now in control begged to differ. Interior Minister Arturo Murillo has publicly insisted that “not a single shot was fired.”

It was an account echoed by the head doctor of the Corazon de Jesus Trauma Center. He allowed me inside the medical clinic only after a crew of five nurses had scrubbed the puddles of blood from the floors. The doctor then insisted that only two of the dead could be confirmed as gunshot victims, and that their wounds were consistent with a .22 caliber weapon – in his words, “non-military weapons.”

How someone with no training as a forensic pathologist could come to such a conclusion is confounding, but what is well known in Bolivia today is that any medical professional who contradicts the official narrative risks criminalization.

When a video of a crying medical professional in Senkata denouncing the horrific violence went viral, he was arrested days later. The Bolivian junta accused him of being a “fake doctor.”

This nurse #AybenHuaranca was the only medical professional who treated the protesters wounded and killed by the Bolivian coup in the #SenkataMassacre. Now the military dictatorship has arrested him on false charges of terrorism, alleging he disguised himself as a soldier and cop pic.twitter.com/MUsnzsnSTX

The wrath of the coup regime, led by a once fringe far-right politician named Jeanine Añez, is felt all across the Bolivian left. Virtually anyone who represents a perceived challenge to the status quo is liable to be hit with manufactured charges of “sedition” or “terrorism.” 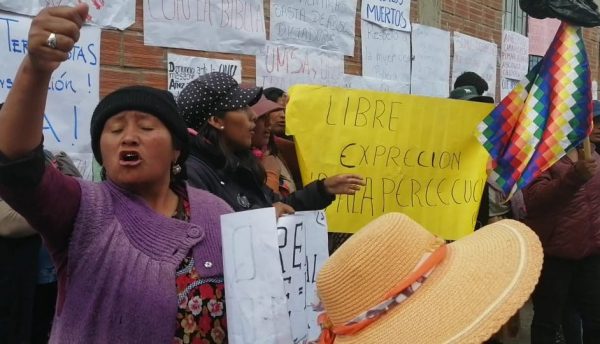 As Koba explained during our clandestine nighttime drive, “they are trying to repress not only protesters that march, but anyone that says something different from what the government says is happening. So they are repressing any media outlet that tries to show the repression and the assassinations, the killings, and show the evidence, and show the protests, and show the marches. Everything that’s against the coup is being harassed and is being attacked.”

He continued: “A lot of small and medium-sized media outlets have been shut down or have been forced to not show what’s going on, and others have been paid to show what they tell them to. So it’s a very serious situation in the freedom of speech department, not only the human rights department, because as I think the world has seen, these guys haven’t held back in using all the force at their disposal.”

Prestige and prominence is no protection under the rule of the junta. Even five-time Emmy-winning journalist Carlos Montero and Juan Manuel Karg were forced from the country after a fanatically right-wing senator labelled them “insufferable communists” who were “sticking their dirty noses in Bolivia.”

Police even hit an Al Jazeera reporter transmitting from the Plaza Murillo in La Paz in the face with tear gas as she attempted to deliver her report.

Al Jazeera's @TeresaBo has been intentionally tear-gassed in the eyes by Bolivian police while on air. She was simply trying to report what was happening. And, being a total pro, she kept right on doing it. pic.twitter.com/74foN7tvRF

And TeleSUR, one of the last remaining news channels to give a voice to opponents of the coup government, had numerous correspondents kicked out of the country on accusations of “sedition” before the station was officially removed from the airwaves on November 21st.

But the repression of international media has paled in comparison to the right-wing repression of local Bolivian media. Within days of the coup, José Aramayo, director of Radio CSUTCB – an ally of Morales – was chained to a tree as paramilitary members frogmarched his staff out of their office.

As Koba explained, Bolivian media outlets now face a choice: either you take a bribe, or your life will be made extremely difficult. In this atmosphere, opposing viewpoints are virtually non-existent on Bolivian TV, which now runs PSAs warning that Evo Morales is trying to starve the audience.

“We are almost alone in showing what’s going on,” Koba said of the threatened band of leftist reporters still active in Bolivia. “The traditional media is just showing what they can’t hide. But they of course deny the evidence. They say that these were inside jobs – that cocaleros and El Alto people are killing themselves.”

“Everything is upside down”

While a few scattered progressives in the US Congress have registered their condemnation of the coup, the damage has been done, and the plot has been fulfilled.

The far-right demagogues who forced out Morales have consolidated control, and as Koba says, “they tried to turn everything upside down so the ‘election fraud’ was a coup, and the coup was a return to democracy; the paramilitary forces are pacifying forces; the fascists are the democrats.”

Everything,” he says, “is upside down.”

Bolivia has become “a huge laboratory for post-truth and 21st century coups that use everything that they have gathered from their experiences in Nicaragua and Venezuela, onto Honduras… Brazil and Argentina,” Koba explained.

In 2008, “they tried to carry out a coup here, and they were unsuccessful, but they learned from their mistakes… This has been a laboratory to use all of their guns – the post-truth, the paramilitary, the civil movements being financed by NGOs and by foreign fascist organizations.”

Now, Koba warns, “anyone who says that this isn’t a transitional government is accused of creating sedition. And everything is sedition. Posting on social media is sedition; talking about the violent repression is sedition; saying what you think is sedition.”

As Bolivia returns to the dark days of de facto rule by a ruthless, US-backed military junta, Koba’s voice is among only a few who still dare to speak out in protest.

After a long and sobering discussion, we returned to downtown La Paz. I shook his hand and wished him well, unsure when, or if, I would see him again. 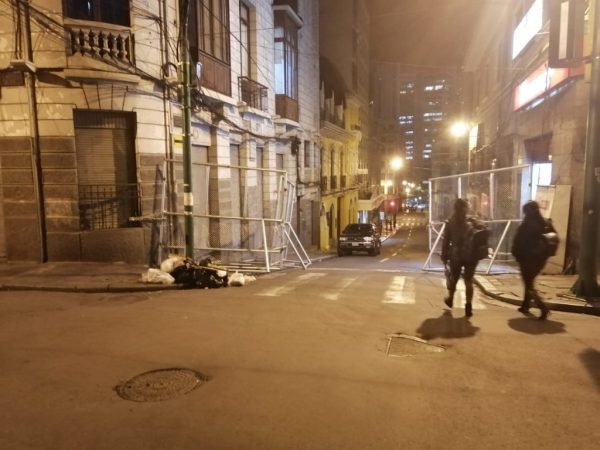 Wyatt Reed is a Virginia-based activist and journalist who covers climate and racial justice movements and foreign policy issues.