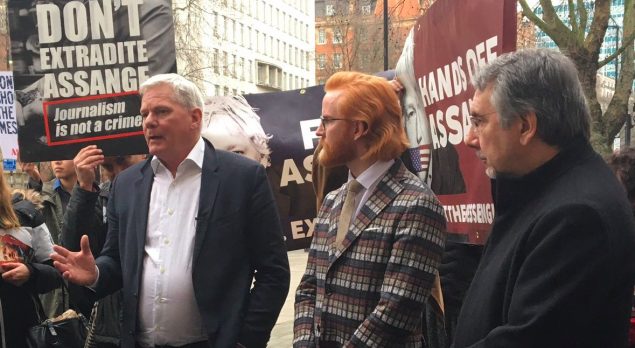 WikiLeaks editor-in-chief Kristinn Hrafnsson gave a brief statement to the press after the latest court hearing for Julian Assange’s extradition case in London on January 23, 2020, saying the Trump administration is arguing that the First Amendment of the US Constitution doesn’t provide press freedom protection to foreign nationals like Assange.

WikiLeaks editor-in-chief Kristinn Hrafnsson gave a brief statement to the press after the latest court hearing for Julian Assange’s extradition case in London today, saying the Trump administration is arguing that the First Amendment of the US Constitution doesn’t provide press freedom protection to foreign nationals like Assange.

“We have now learned from submissions and affidavits presented by the United States to this court that they do not consider foreign nationals to have a First Amendment protection,” Hrafnsson said.

“Now let that sink in for a second,” Hrafnsson continued. “At the same time that the US government is chasing journalists all over the world, they claim they have extra-territorial reach, they have decided that all foreign journalists which include many of you here, have no protection under the First Amendment of the United States. So that goes to show the gravity of this case. This is not about Julian Assange, it’s about press freedom.”

Hrafnsson’s very newsworthy claim has as of this writing received no mainstream news media coverage at all. The video above is from independent reporter Gordon Dimmack.

This prosecutorial strategy would be very much in alignment with remarks made in 2017 by then-CIA Director Mike Pompeo.

“Julian Assange has no First Amendment freedoms. He’s sitting in an embassy in London. He’s not a U.S. citizen,” Pompeo told the Center for Strategic and International Studies.

That, like nearly every sound which emits from Pompeo’s amorphous face, was a lie. The First Amendment is not a set of special free speech privileges that the US government magnanimously bestows upon a few select individuals, it’s a limitation placed upon the US government’s ability to restrict rights that all persons everywhere are assumed to have.

This is like a sex offender who’s barred from living within 500 yards of a school claiming that the school he moved in next to is exempt because it’s full of immigrants who therefore aren’t protected by his restriction. It’s a restriction placed on the government, not a right that is given to certain people.

Attorney and Future of Freedom Foundation president Jacob Hornberger explained after Pompeo’s remarks, “As Jefferson points out, everyone, not just American citizens, is endowed with these natural, God-given rights, including life, freedom, and the pursuit of happiness. That includes people who are citizens of other countries. Citizenship has nothing to do rights that are vested in everyone by nature and God. At the risk of belaboring the obvious, that includes Julian Assange.” 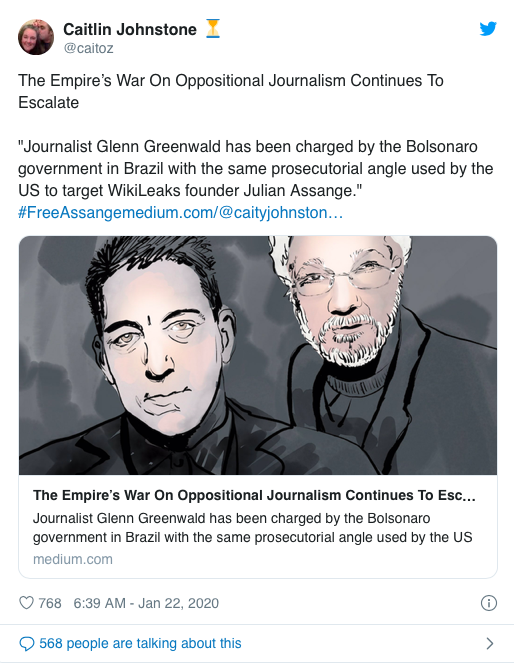 Journalist Glenn Greenwald, who is himself now being legally persecuted by the same empire as Assange under an indictment which Hrafnsson in the aforementioned statement called “almost a carbon copy of the indictment against Julian Assange”, also denounced Pompeo’s 2017 remarks.

“The notion that WikiLeaks has no free press rights because Assange is a foreigner is both wrong and dangerous,” Greenwald wrote at the time. “When I worked at the Guardian, my editors were all non-Americans. Would it therefore have been constitutionally permissible for the U.S. Government to shut down that paper and imprison its editors on the ground that they enjoy no constitutional protections? Obviously not.”

Greenwald, who is a former litigation attorney, referenced a Salon article he’d written in 2010 skillfully outlining why Senator Susan Collins’ attempts to spin constitutional rights as inapplicable to foreigners would be outlandish, insane, illegal and unconstitutional to put into practice.

“To see how false this notion is that the Constitution only applies to U.S. citizens, one need do nothing more than read the Bill of Rights,” Greenwald argued in 2010. “It says nothing about ‘citizens.’  To the contrary, many of the provisions are simply restrictions on what the Government is permitted to do (‘Congress shall make no law respecting an establishment of religion . . . or abridging the freedom of speech’; ‘No soldier shall, in time of peace be quartered in any house, without the consent of the owner’).  And where rights are expressly vested, they are pointedly not vested in ‘citizens,’ but rather in ‘persons’ or ‘the accused’ (‘No person shall . . . . be deprived of life, liberty, or property, without due process of law’; ‘In all criminal prosecutions, the accused shall enjoy the right to a speedy and public trial, by an impartial jury of the state and district wherein the crime shall have been committed . . . . and to have the assistance of counsel for his defense’).”

“The U.S. Supreme Court, in 2008, issued a highly publicized opinion, in Boumediene v. Bush, which, by itself, makes clear how false is the claim that the Constitution applies only to Americans,” Greenwald wrote. “The Boumediene Court held that it was unconstitutional for the Military Commissions Act to deny habeas corpus rights to Guantanamo detainees, none of whom was an American citizen (indeed, the detainees were all foreign nationals outside of the U.S.).  If the Constitution applied only to U.S. citizens, that decision would obviously be impossible.”

“The principle that the Constitution applies not only to Americans, but also to foreigners, was hardly invented by the Court in 2008,” Greenwald added. “To the contrary, the Supreme Court — all the way back in 1886 — explicitly held this to be the case, when, in Yick Wo v. Hopkins, it overturned the criminal conviction of a Chinese citizen living in California on the ground that the law in question violated his Fourteenth Amendment rights to due process and equal protection.  In so doing, the Court explicitly rejected what Susan Collins and many others claim about the Constitution.”

These “and many others” Greenwald referred to would now include both Mike Pompeo and the Department of Justice prosecutors who are attempting to extradite and imprison Assange for publishing information exposing US war crimes. 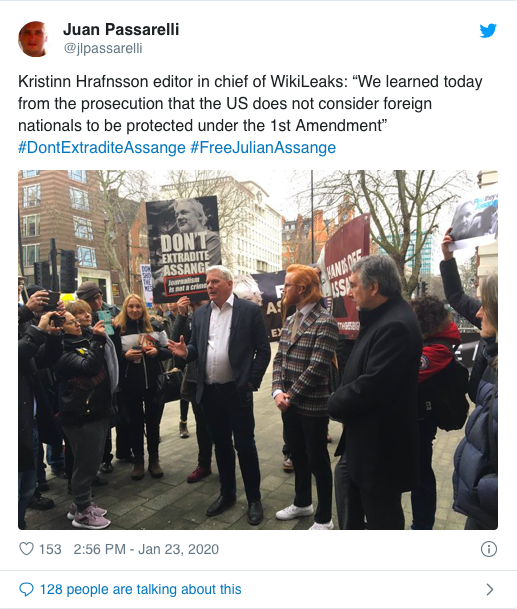 So let’s be clear here: the Trump administration isn’t just working to establish a legal precedent which will demolish press freedoms around the world, it’s also working to change how the US Constitution operates on a very fundamental level.

Does now seem like a good time to fight against this to you? Because it sure as hell seems like that time to me.

Hrafnsson also said in this same statement that Assange’s extradition trial is going to be split into two separate dates, the first on February 24 for one week and then reconvening again for three weeks starting May 18. If you care about freedom of virtually any sort, I highly recommend paying very, very close attention.

The Empire’s War On Oppositional Journalism Continues To Escalate