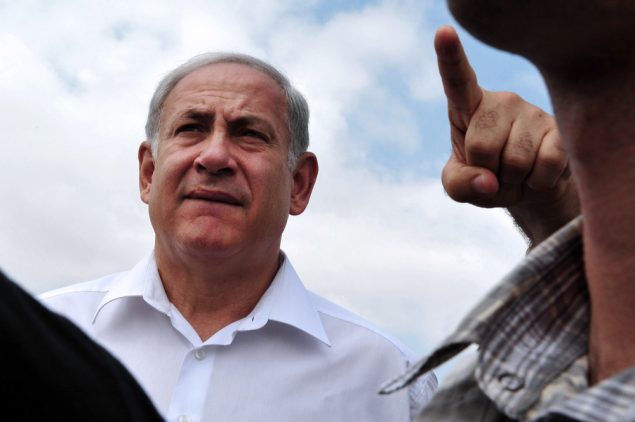 Read beyond the title and see what Zogby has to say about the “virtual Trump/Netanyahu marriage” that blossomed prior to the election; something that lead the embrace of Gantz by many liberals.

I’m glad Benjamin Netanyahu won reelection. Since I realize that saying this won’t sit well with many folks, let me explain:

As the election developed, it became clear that Benny Gantz, the leader of the opposition “Blue and White” coalition, for a number of reasons, had come to be seen as the darling of the liberal set – especially here in the United States.

Some, for example, were justifiably upset by Netanyahu’s gross corruption or unnerved by his authoritarian actions designed to intimidate the press, silence non-governmental organizations, and strip the courts of their power. Others were optimistic that should Gantz win, Israel’s image would improve in the United States and there would be the possibility of a “reset” in the U.S.-Israel relationship. One publication described a Gantz victory as creating “a fresh slate and an opportunity to re-energize support for Israel.”

Driving this support for Gantz was the concern of liberal Democrats who have been troubled by recent polls showing a significant erosion of support for Israel among core Democratic constituents – especially millennial and minority voters – including American Jewish millennials. This growing alienation from Israel has in part been due to both Netanyahu’s repressive policies and his close relationship with Donald Trump. There could be no doubt that Trump had been excessive in his support for his Israeli partner: canceling the Iran Deal; moving the US embassy to Jerusalem; the “gift” of the Golan Heights; cutting all U.S. aid to the Palestinians; and remaining silent in the face of settlement expansion and Netanyahu’s declared intent to apply Israeli sovereignty to West Bank settlements. This virtual Trump/Netanyahu marriage most certainly had a role to play in the embrace of Gantz by many liberals.

Because American liberals have embraced the mantra of a “two-state solution” and see Netanyahu’s aggressive settlement construction and his pledge to “annex” the settlements as obstacles to that goal, they also fretted that a Netanyahu victory might spell the end of their idea of two states – one “Jewish and democratic” and one for the Palestinians. At the same time, American Jews had an additional frustration with Netanyahu as a result of his accommodation of the illiberal policies of Israel’s ultra-Orthodox religious community on issues of marriage, conversion, and women’s rights.

It was in this context, that Gantz became the “great hope.” I, however, never believed that he was.

In the first place, on the issue that mattered most to the future of peace – the treatment of Palestinians in the occupied territories – there was little that separated Netanyahu from Gantz. In fact, Gantz’s opening campaign advertisement featured Gaza in rubble (Gantz had been in charge of the most brutal and devastating of the Gaza wars), boasting the he had reduced parts of Gaza “back to the Stone Age.” And right before the election, an American Jewish publication reported on a Gantz speech laying out his “seven pillars” for peace with the Palestinians: “he said his priority was to ensure a Zionist ‘end state’ – Jewish and Democratic – and not a binational state, while keeping the Jordan Valley, a united Jerusalem, and modifying the 1967 lines…I don’t want to rule the Palestinians.” In addition to these goals, he added keeping the settlements and maintaining security control west of the Jordan River.

In other words, Gantz might have been a “fresh face,” but, on the central issue of dealing with Palestinians and the occupied territories, he was no different than the prime minister he was seeking to replace.

In addition to the positions he espoused, I felt that it was important to look at the composition of the governing coalition Gantz would have assembled had he emerged victorious. Although the press routinely referred to Gantz as the “center-left” candidate, in reality, only a small fraction of his potential partners could be seen as “left.” In fact, most of his eventual partners were quite comfortable with Gantz’s “seven pillars.” And because Israeli politics have moved so far to the right, even if he had won the opportunity to form a government, Gantz never could have assembled a coalition of 61 Knesset Members without adding the parties representing the Palestinian citizens of Israel – something that, early on, Gantz had said he would never do.

This avoidance of Arabs was in response to the negative anti-Arab campaign waged by Netanyahu. Recognizing that Gantz couldn’t have formed a government without Arab support or acquiescence, Netanyahu advanced the slogan that the voters’ choice was “Bibi (Netanyahu’s nickname) or Tibi” (referring to Ahmed Tibi, the leader of one of the Arab parties). Instead of pushing back against this patently racist Arab-baiting, Gantz made a pledge not to consult with the Arab parties in the Knesset or include them in his government.

With Netanyahu back for his fifth term as prime minister, liberals must now face reality. They can no longer see Israel as a romanticized “idea” of a progressive state governed by liberal values. Rather it has demonstrated that it is an illiberal ethno-nationalist society that has applied an apartheid-like repressive system to enable their continued rule over a captive Palestinian people.

Liberals may continue to say that they oppose settlements and seek a two-state solution. But here too they will now have to confront reality. The settlement expansion that occurred on their watch, and which they took no concrete steps to curtail, has made a two-state solution impossible to implement. And, they must now admit that Netanyahu, who for years they tolerated and even feted, has in reality “played them like a fiddle.” This won’t come easily.

It was interesting to watch how a few leading liberal pundits and Democratic elected officials reacted during and after this election. When it appeared that Gantz might win, they felt that it was safe to denounce Netanyahu and even call him a racist, now with Netanyahu emerging as the victor, they have flipped on a dime, congratulating him on his victory and pledging to work with him to implement the two-state solution – some illusions do die hard.

But with Netanyahu expected to continue his extremist anti-Palestinian, anti-peace, anti-rule of law, and pro-Trump agendas, the debate about Israel here in the United States will intensify. Because the base of the Democratic Party has awakened to the realities of the occupation and is deeply offended by everything both Netanyahu and Trump stand for, several developments can be expected.

The rift between the base of the Democratic Party and its elected officials will continue to grow. This will take the form of candidates for higher office increasingly being called to account for their failure to challenge Israeli behaviors.  The debate within the American Jewish community will also intensify, with liberal Jews forced to reexamine their views of Israel and their support for the policies of that state. As a result of these developments, the Democratic Party is moving toward becoming the anti-Netanyahu, anti-settlements, anti-annexation party – with an increasing number of Democrats even voicing support for cutting aid to Israel and advocating for the rights of citizens to support the BDS movement.

We are on the threshold of a major change in how Israel will play out in American politics. I’m afraid that it has come too late to save the two-states that were envisioned by the long dead Oslo Accords. But it is a good thing that we will now finally be able to have an honest debate about the dreadful situation created by American complicity in enabling Israel’s continued oppression of Palestinians. This debate might have been aborted for a time had Gantz won. The occupation and settlements would have continued – but liberals would have been less inclined to challenge him. With Netanyahu back, the debate will be energized. It might be late in the game, but better late than never.

James Zogby co-founded the Arab American Institute in 1985 and continues to serve as its president. He is Director of Zogby Research Services, a firm that has conducted groundbreaking surveys across the Middle East. For the past 3 decades, he has served in leadership roles in the Democratic National Committee and served 2 terms as a President Obama appointee to the United States Commission on International Religious Freedom. He writes a weekly column published in 12 countries. He is featured frequently on national and international media as an expert on Middle East affairs. In 2010, Zogby published the highly-acclaimed book, Arab Voices.