Who will harvest the fruit and vegetables with day laborers trapped by the border closure? 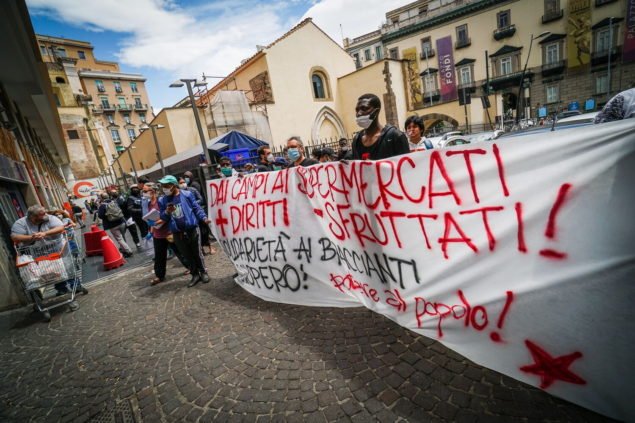 Harvesting strawberries, oranges, tomatoes, melons or asparagus across Europe is in jeopardy because the closure of the EU’s internal and external borders has blocked the movement of hundreds of thousands of day laborers who make it possible for fruit and vegetables reach the market.

Although governments have called for “armies” of the unemployed left by the economic impact of the pandemic to go to work in the countryside, in practice this workforce is difficult to replace, simply because the work is often too hard. and poorly paid. And even more so when in the field distancing measures are also not complied with to prevent contagion.

Only 7,000 of the 19,000 Moroccan day laborers who work in the strawberry harvest each year have arrived in the province of Huelva. Without them, the use of paperless, which was already a structural part of the agricultural workforce in Spain, has intensified. They are the ones who are in a more painful situation. “There is no protection against coronavirus here: we work from 7 to 14 h collecting raspberries less than a meter away from us, without masks, and we have no water to wash our hands,” he explains in a WhatsApp conversation with Abubakr, a 29-year-old Malian who lives in a settlement in Huelva with a hundred sensepapers. His salary is 38 euros.

At the camp it is also impossible to follow the recommendations of the Spanish health authorities: “There is no running water or any sanitary control and people are afraid to go to the doctor because they do not have a health card.” While showing his hut made of pallets, cardboard and plastics, he says that in Spain he lives no better than the time he spent in Algeria on his way to Europe: “If you don’t work, you don’t eat.” And he only asks for one thing: to have papers to be able to work. The Red Cross occasionally brings food to the camps, but the day laborer – who fled the Mali war in 2016 – says he wants to make a living from his work: “We don’t want to be given aid or food, we just want to work with our hands ”.

Dozens of companies in Huelva and Almeria are fed by workers who live in about 120 camps, and that according to the UN special rapporteur on extreme poverty, who visited Spain last year, “have worse conditions than those of a refugee camp “. From the Andalusian Workers’ Union (SAT), they warn that non-compliance with the law is widespread:” With immigrants they do what they want, and if they are women even more, but also with the natives they are violated If we used to respect little or nothing, now even less, our mobiles keep calling unemployed Andalusian workers in the hospitality industry who had never imagined having to work in these conditions: picking garlic or onions, without no distance, playing ass to ass, for 30 euros a day “, denounces Oscar Reina, spokesman of the union. day laborers on a Rocío estate: van d to emanate masks and hydrogel and they have taken them all out ”.

Reina says the employer is taking advantage of the labor shortage myth to continue exploiting desperate people. “There are enough immigrants here and enough natives to work, the problem is in what conditions. That is why we have Andalusian families who are going to work in France, because there they are paid the legal wage, they contribute and they are treated like people.… Here we are very close to slavery. ”
Regularization in Italy and charters in Germany

In Italy, where according to the agricultural employer Confagricoltura 250,000 temporary workers are missing, mostly from Romania, the authorities have chosen to legalize the situation of undocumented workers to work in agriculture or the domestic sector. The USB union has called a strike to denounce the measure as leaving out many migrants who went underground with the decree of former far-right Interior Minister Matteo Salvini.

Germany, which has 300,000 temporary workers from Eastern Europe each year, mostly from Romania and Poland, the government has provided runners with the arrival of 80,000 temporary workers. On April 10, the Romanian organization Ecoruralis denounced images of 1,800 agricultural workers in the city of Cluj crowding to board buses and charter flights that were to take them to Germany without protection measures.
European Commission President Ursula von der Leyen has urged European partners to consider day laborers as essential workers and to create “green lanes” to facilitate their mobility amid pandemic restrictions. Commission sources explain that work is continuing in this direction, but Brussels does not yet have data to prove that these corridors are working.

Since April 15, a minimum of seven planes from Romania with almost 500 temporary workers have scheduled their arrival in the United Kingdom to collect fruit and vegetables in Lincolnshire, the country’s major agribusiness center, reports Quim Aranda. The British agricultural industry will need about 90,000 workers by the end of the autumn and has appealed to students and staff in the hospitality and catering sector, mostly unemployed, to take part in field work. Since early April, however, only about 5,500 people have responded to the call. Faced with a shortage of manpower, also fueled by Brexit, Prince Charles on Wednesday called for the creation of an “army for the countryside”, as was done in World War II. French Agriculture Minister Didier Guillaume also called on waiters, hairdressers and other sectors who cannot work under confinement to “join the great army of French agriculture.”

Spaniards in Holland and Romanians in Germany

Blanca Garcés, a CIDOB researcher, points out that the demand for foreign labor to work in the field does not depend on the level of unemployment in each country: “It is a sector with very low working conditions and wages that local workers and this demand for outside labor always exists, because the people who arrive right away can look for better jobs: agriculture or the care sector always pulls in new or temporary workers who are only a few months in the country, and this could be Spaniards going to Holland or France, Moroccans going to Spain or Romanians going to Germany or Ukrainians going to Poland. ”Garcés points out that the pandemic has made this reality visible:“ Jobs such as picking fruit or vegetables, which were previously hidden, are now seen as essential, as well as respect for labor rights because otherwise they will be pandemic hotspots and can put the entire population at risk.Now 200 temporary workers sleeping on the street in Lleida is no longer a problem for them. They are everyone’s problem. ”

Gustavo Duch, coordinator of the magazine Soberanía Alimentaria, points to the underlying problem: “We live in a system that understands food as a commodity, which is not designed to satisfy this basic right of the population and at the same time a way worthy of living the people who work there, but as in any other sector the goal is profit. We are talking about a right that has been left in the hands of the market, under the logic of the capitalist system in which everything is worthwhile. “