Who was Stepan Bandera?

Lionized as a nationalist hero in Ukraine, Stepan Bandera was a Nazi sympathizer who left behind a horrific legacy. 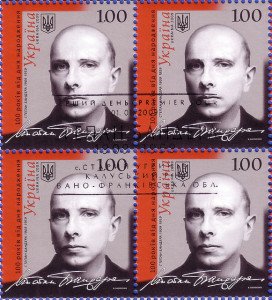 When Western journalists traveled to Kiev in late 2013 to cover the Euromaidan protests, they encountered a historical figure few recognized. It was Stepan Bandera, whose youthful black-and-white image was seemingly everywhere — on barricades, over the entrance to Kiev’s city hall, and on the placards held by demonstrators calling for the overthrow of then-president Viktor Yanukovych.

Bandera was evidently a nationalist of some sort and highly controversial, but why? The Russians said he was a fascist and an antisemite, but Western media were quick to disregard that as Moscow propaganda. So they hedged.

The Washington Post wrote that Bandera had entered into a “tactical relationship with Nazi Germany” and that his followers “were accused of committing atrocities against Poles and Jews,” while the New York Times wrote that he had been “vilified by Moscow as a pro-Nazi traitor,” a charge seen as unfair “in the eyes of many historians and certainly to western Ukrainians.” Foreign Policy dismissed Bandera as “Moscow’s favorite bogeyman . . . a metonym for all bad Ukrainian things.”

Whoever Bandera was, all were in agreement that he couldn’t have been as nasty as Putin said he was. But thanks to Grzegorz Rossoliński-Liebe’s Stepan Bandera: The Life and Afterlife of a Ukrainian Nationalist, it now seems clear: those terrible Russians were right.

Bandera was indeed as noxious as any personality thrown up by the hellish 1930s and ’40s. The son of a nationalist-minded Greek Catholic priest, Bandera was the sort of self-punishing fanatic who sticks pins under his fingernails to prepare himself for torture at the hands of his enemies. As a university student in Lviv, he is said to have moved on to burning himself with an oil lamp, slamming a door on his fingers, and whipping himself with a belt. “Admit, Stepan!” he would cry out. “No, I don’t admit!”

A priest who heard his confession described him as “an übermensch . . . who placed Ukraine above all,” while a follower said he was the sort of person who “could hypnotize a man. Everything that he said was interesting. You could not stop listening to him.”

Read the full article and view the accompanying photos at Jacobin, here.

* Daniel Lazare published a vital review in Jacobin in 2014 of historian Timothy Snyder’s 2010 book ‘Bloodlands: Europe between Hitler and Stalin’. The review is titled ‘Timothy Snyder’s Lies’. Lazare argues in the book review that the highly successful ‘Bloodlands’ is part of the contemporary wave of historical writing which downplays the crimes of the German Nazis by making an “equivalency” argument with the political repression that marked the political rule of Joseph Stalin in the Soviet Union during the 1930s.

* More information on Grzegorz Rossolinski-Liebe’s 2014 book ‘Stepan Bandera: The Life and Afterlife of a Ukrainian Nationalist’ is here in the ‘recommended books’ section of the New Cold War.org website.