Who is Yaroslav Levenets, named as the accomplice of the murderer of former Russian Duma deputy Denis Voronenkov?

By Valeria Ivashkina, published in Strana.ua, March 27, 2017  , translated from the Russian original by New Cold War.org.

Levenets taught combat skills and fought in the ‘Anti-Terrorist Operation’ in eastern Ukraine. ‘He is a very patriotic guy and very sincere’ say his associates. 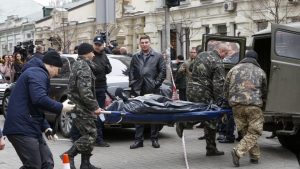 People’s deputy and adviser to the head of the Interior Ministry of Ukraine Anton Gerashchenko says that Paul Parshov, who killed ex-Russian State Duma deputy Denis Voronenkov on March 23, had an accomplice. He was waiting for the killer in a car, a Daewoo Lanos, but seeing his bleeding accomplice, he fled the scene and disappeared.[1]

Blogger Anatoly Shariy has named the accomplice – Yaroslav Levenets. On March 24, the day after the murder of Voronenkov, Levenets was placed on a wanted list by police. This is confirmed by a record search on the website of the Ministry of Internal Affairs (MVD). It turns out that this is not the first such listing of Levenets by the police, as he is a well-know [ultra] nationalist.

Note by New Cold War.org: Western media has predictably fallen silent in the aftermath of the killing of Denis Voronenkov in Kyiv on March 23, 2017. Its initial, concocted stories, scripted by the Ukrainian government–that the killer was likely a ‘Russian agent’–have done their job in sowing fake news and yet more confusion over what is taking place in EuroMaidan Ukraine. Case closed.

Yaroslav Levenets was born on August 28, 1985 in the Dnepropetrovsk region. Together with his wife and two children, he still lives in the region. According to his wife, Levenets has a post-secondary education in physical education and sport. He worked coaching hand-to-hand combat skills. In 2012, he was arrested under article 191 of the Criminal Code, specifically section 5 (embezzlement of someone else’s property), section 205, part 2 (fictitious entrepreneurship) and section 212, part 3 (tax evasion). 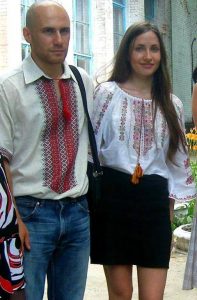 Yaroslav Levenets pictured on Facebook with his wife (photo on Strana.ua)

According to his fellow nationalists – [he was persecuted] because of his actions in opposing drug trafficking and because he was a member of the nationalist organization ‘Trident’, which was then headed by Dmitry Yarosh, future founder of ‘Right Sector’ [neo-Nazi] organization.

As we wrote previously in Strana about the essence of this case [weblink to previous article in Strana explaining that Pavel Parshov was criminally charged with cash transactions using fake, registered  construction companies] Levenets worked in the centers for laundering cash together with Parshov. He went by the nickname ‘The Pound’ at the [fake] enterprises.

Apparently, they were already familiar with each other, as indicated by the coincidences in their biographies. The murderer of Voronenkov was also a radical nationalist and was also engaged in martial arts.

Levenets spent a year and a half behind bars. During his court hearings, the nationalist organizations of the Dnieper region carried out pickets in support of him. He was considered a “political prisoner of the Yanukovych regime.” His support group of the time still has a presence on social networks.

Tatiana Bliznyuk , head of the Committee for the Liberation of Political Prisoners, worked to gain a release from custody for Levenets in 2014. She said, “We did not know about him when we began campaigning to release political prisoners after Maidan [February 2014]. As soon as we got information about him, we began to demand his release, too.

“He spent six months under arrest after Maidan [released around August 2014]. We managed to change pre-trial restrictions for him. As soon as he was released, he immediately came to fight. He didn’t spent even two days at home. When released, he joined the Right Sector. After that we stopped track him.

“Later I met him a couple times at various patriotic events and rallies. His wife said that he is not available. He is a very patriotic guy. He’s so sincere! I think it’s a frameup [by police],” she commented to Strana.

Levenets is known by a code name ‘Hunter’. He was enrolled in the ‘Carpathian Sich’ detachment of the ‘Donbass Battalion’ (military unit 3057) –the same unit where Pavel Parshov served.

In 2015, Levenets was again put on a wanted list for violations of his house arrest parole condition.

“After we secured his release, he was placed under round-the-clock house arrest. He should have stayed at home, but he set out for war,” said Bliznyuk.

In 2016, a new court hearing took place in which house arrest for Levenets was re-imposed. As at previous hearings, Rada deputy Semen Semenchenko [elected in 2014, Wikipedia] intervened on Levenets’ behalf. The deputy is a founder of the ‘Donbass’ paramilitary battalion in 2014. As of press time, he has not commented on the latest events.

There are gaps in Parshov’s history during the time he was wanted for financial crimes (from 2012 to early 2015). Theoretically, he could have been in Russia during that time and been recruited to the Russian police services, as Ukraine’s Ministry of Internal Affairs and the GPU national police assert. But many experts doubt this story.

Levenets’ life during this time, meanwhile, was in full view. He certainly could not have been trained in “the school of sabotage run by the NKVD [Russian secret police]” as Ukraine’s deputy minister of police Anton Gerashchenko has alleged, because he was either under house arrest or was fighting in the ‘Donbass’ battalion.

Note:
[1] On March 23, 2017, Paul Parshov shot and killed former deputy of the Russian State Duma Denis Voronenkov. The killing took place in central Kyiv in broad daylight. The victim had left Russia for Ukraine after he lost a bid for re-election to the Duma in September 2016. Voronenkov was facing criminal charges in Russia for financial crimes and had lost his parliamentary immunity from prosecution. Parshov was shot by Voronenkov’s body guard and died later the same day in hospital.