Who does the Kremlin want to win: Clinton or Trump? 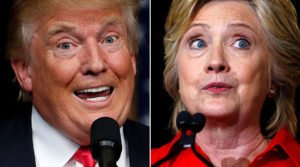 Despite a concerted campaign in America to link the Republican nominee with the Kremlin, there is no evidence to support the narrative that the Russian government wants Donald Trump to become the next U.S. President.

The novelist Sidney Sheldon, who had a Russian background, once mused that “to be successful you need friends and to be very successful you need enemies.” While there’s little doubt the U.S. establishment shares that view, America’s sheer power and wealth makes it find to hard credible opponents. As a result, they just keep coming back to Russia, in the process bestowing upon it astounding capabilities that contradict the other usual yarn that the country is in terminal decline. Innuendo that this column has previously dubbed ‘Russophrenia’.

Thus, the current hysteria about alleged ties between Trump and Vladimir Putin is nothing new. After all, during the last Presidential campaign, failed candidate Mitt Romney described Russia as “America’s number one geopolitical foe”. As it happens, in 2008, John McCain’s running mate, Sarah Palin, suggested in her first major interview that the United States should consider war with Russia one day in order to defend Georgia. The same year, McCain revealed his concern “about a couple of steps the Russian government took in the last few days; one was reducing the energy supplies to Czechoslovakia”. A country that hasn’t existed since 1993.

For some time now, the Western media has pushed a potboiler which alleges Putin desires a Trump victory in November’s election. Last week, certain pro-Hillary Clinton commentators took things to a new level by insisting that the Kremlin actually controls the businessman-turned-reality-TV-star-turned-politician. Indeed, The New York Times’ most prominent columnist, Paul Krugman, has even dubbed him “the Siberian candidate” – a smear meant to invoke memories of The Manchurian Candidate, a 1960’s Frank Sinatra movie in which ‘old blue eyes’ discovers his protégé has betrayed America to serve an international Communist plot.

Fundamentally, these conspiracy theorists want people to believe the Russian government is manipulating democratic battles across the globe, from Brexit to the U.S. election and beyond. Meanwhile, in the real world, the Kremlin is preoccupied with stabilizing food prices and getting a handle on inflation in Russia. So, Hillary’s supporters, with straight faces, are telling you that an administration that is struggling to return its own country to economic growth is so all-powerful that it can dictate who Americans choose to run their country. This does not compute.

In the popular American press, commentators on Russia very often have ancestral roots in the old Russian empire – Krugman himself is the grandson of Belorussian immigrants – and therefore they generally know quite a bit about the history of Russia and its neighbours. However, judging from the hackneyed clichés, which have become a trademark of their writings, they don’t seem to be very well briefed on contemporary state-of-play in the region. In this they are similar to Irish Americans who often believe they know better about how to fix the Ulster question than people who actually live there. This form of ‘support’ was especially unhelpful during the decades of violent troubles in the province and it’s repeating itself now when it comes to the internal dynamics of the former Warsaw Pact area.

To anyone who lives in Russia, or has spent considerable time here, the notion that Moscow could recruit Trump and bend him to its bidding is frankly preposterous. Russia remains a great power, but one with considerable domestic challenges, economically and socially. As a consequence, its authorities, to state the completely obvious, have better things to do than conniving overseas on this scale. Not to mention that Trump is so erratic that you’d barely trust him with a drinks order, let alone a plan so cunning and convoluted that even John Le Carré wouldn’t touch it. It’s really that ludicrous.

The sound on the ground

The feeling amongst Moscow’s expert community is that the Kremlin has no idea about which candidate it favors. Both have so many negatives that it has come down to a choice of who will be the least evil of two lessers. But let’s talk about what we do know.

Firstly, it’s probable that Putin personally dislikes Hillary and there are two reasons why this appears to be the case. Back in 2011, during liberal opposition protests in Moscow, Clinton openly interfered, which wasn’t a very clever thing to do. Quite understandably, the Kremlin was furious and Putin publicly exhibited his own feelings of betrayal, so soon after a supposed “re-set” in relations.

“I looked at the first reaction of our U.S. partners,” Putin said. “The first thing the Secretary of State (Hillary) did was say that they (the election) were not honest and not fair, but she had not even yet received the material from the observers. She set the tone for some actors in our country and gave them a signal,” he explained. “They heard the signal and with the support of the U.S. State Department began active work.”

It’s worth noting that, in Russia, “active work” is an old description for undercover KGB operations.

Then in 2014, things got even worse. There’s no easy way of putting this but Hillary, while assessing post-coup events in Ukraine, basically compared Putin to Hitler. The President responded by jibing she had “never been too graceful with her statements.”

Armed with this knowledge, it’s reasonable to assume that Putin is not very excited about a putative U.S. supremo who, in a moment of remarkable hyperbole, equated him to a man responsible for the deaths of millions of Russians. But that doesn’t mean Putin, a politician of immense experience, is overjoyed about the prospect of Trump either. If mere words were all it took to discommode the President, he’d hardly have survived close to two decades on the frontline of Russian politics.

And so this brings us to the man they call ‘the Donald.’ It’s hard to swallow the notion that Russia’s highly educated elite could favor anybody this uncouth and unstable candidate. His foreign policy suggestions on NATO might sound like music to Kremlin ears, but the rest of his platform doesn’t. Trump isn’t merely proposing an American rethink on NATO-area Europe but a wider American withdrawal from the world and an extremely isolationist outlook.

For a start, Western Europe, which boasts the British and French militaries among others, is well able to defend itself anyway, if push comes to shove. In addition, somewhat paradoxically, a complete American retrenchment would not be in Russia’s interests because without Uncle Sam’s watchful eye, it would probably lead to an explosion in regional conflicts across Eurasia. And that, in turn, would result in a surge in the proliferation of nuclear weapons – something to which the Kremlin has always been highly opposed.

Then there is the issue of Trump’s very vocal encouragement for an expansion of the U.S. fracking industry. In 2013, oil and gas revenues accounted for 68 percent of Russia’s total export revenues and the price crash of the past two years has severely wounded the Kremlin’s finances. Further growth in U.S. oil production would effectively kibosh prospects of a sustained rise in oil prices, which would be very bad news for Moscow.

Currently, it suits Hillary Clinton’s campaign team and her media advocates to push the McCarthy-ite spiel that Trump is in league with a foreign power that is not presently considered a friend in Washington. For their part, Trump sympathizers have hit back with evidence that his opponent has had palpable financial associations with Moscow herself. On Twitter: Cash flowed to Clinton Foundation amid Russian uranium deal, New York Times, April 23, 2015.

Meanwhile, the Kremlin’s silence suggests it might be heeding the advice of Napoleon, who once remarked: “never interrupt your enemy (sic) while he is making a mistake.”

Clearly, this whole situation is a gigantic snafu. Let’s face it, America’s political system, which they’ve been trying to get Russia to emulate for the past few decades, has thrown up two deeply flawed candidates. While Trump’s rhetoric on Russia looks promising, when viewed from Moscow right now, there’s no certainty he would remain consistent.

And the U.S. has previously seen Presidential candidates who were conciliatory towards Russia while campaigning, but proved different in office. Jimmy Carter and John F. Kennedy immediately spring to mind in that regard. By contrast, Ronald Reagan talked tough on the hustings, but made huge efforts to find accord with Mikhail Gorbachev as Commander-in-Chief.

While Trump is an unknown quantity, Hillary is another story entirely. What you see from her is probably what you will get. Sure, Moscow is hardly enthusiastic about what it can visualize right now, but it’s probably more comfortable than flying blind.

So who does the Kremlin favor between Trump and Hillary? Most likely neither of them.

Bryan MacDonald is an Irish journalist, who is based in Russia.

U.S. presidential candidate Donald Trump’s call for improved relations with Moscow and his apparent backing of Crimea’s decision to secede from Ukraine are unlikely to inspire confidence in Russia.

Over the weekend, Trump told ABC News in an interview that the people of Crimea would prefer being part of Russia instead of Ukraine. On Monday Trump said it would be good if the United States and Russia could get along.

“It strains credulity beyond the breaking point that Putin would want Trump to be president of the United States, unpredictable as he is,” McGovern, who briefed three U.S. presidents and headed the CIA’s Soviet policy branch, told Sputnik on Monday.

The whole premise is crazy, McGovern noted, that Trump’s embrace of better U.S.-Russian ties somehow makes Putin a fan. “I know a little bit about Russian and Soviet leaders,” McGovern added.  “The last thing they want is somebody who is proud of being unpredictable and who gets irate at the slightest slight.”

That Putin, McGovern added, would want Trump to have his finger on the nuclear button “is a leap of faith that I cannot possibly make and remain sane.”

“With respect to Hillary, I’m saying there’s no lesser of two evils,” McGovern said. “I don’t think he [Putin] wants Trump to win. I don’t think he wants Hillary to win either.”

McGovern suggested that the idea that Putin supports Trump has unfortunately wormed its way into a narrative being spun by Democrats and major US media outlets that back Clinton. If the media says Putin wants Trump to win 50 times, then 95 per cent of the American people will believe that to be true, McGovern added.

On Monday, U.S. Democratic Senator Chris Murphy said in a Twitter post that Trump’s favorable positions on Russia are likely related to investments in the country.

A Public Policy Polling survey revealed that voters from the key U.S. swing state of Pennsylvania are less likely to support a presidential candidate with friendly views toward Russia.