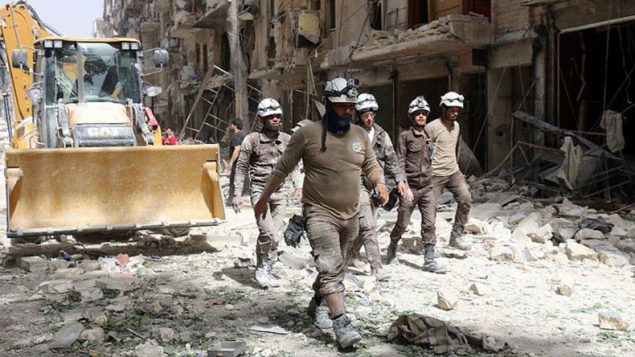 The White Helmets walk through debris in a rebel-held neighborhood of Aleppo. Photo Credit: AFP

Vanessa Beeley updates listeners on what’s been happening with the White Helmets, following the mysterious death of its founder James Le Mesurier.

Vanessa Beeley updates listeners on the White Helmets, following the mysterious death of its founder James Le Mesurier. Beeley goes back to the basics: Who was Le Mesurier? He was with British intelligence, previously remodeling the Kosovo Liberation Army. Already, history is being revised, as corporate media scrubs Le Mesurier’s background and his founding role in the White Helmets.

And there is much we aren’t told today about the White Helmets. The recent OPCW revelations demonstrate that the Syrian government did not use gas warfare, which brings into question the origin of the bodies that the White Helmets paraded in front of cameras.

There’s lots of sleuthing and subterfuge in the WH history and funding. Their parent organization, MayDay rescue, was funded by the U.K. government. Le Mesurier was handling upwards of $200 million in funding for the White Helmets.

Phil also reminds us that the White Helmets stole the name “Syria Civil Defense” from a real Syrian organization that existed on the ground. He argues that it requires a “colonized mind” to believe that Syrians needed help from the British foreign office to learn how to conduct civil defense.

It also turns out that, if you talk to actual White Helmets, they admit the factionalization of their organization, reflecting the sectarian divisions in the terrorist groups that oppose the Syrian government.

After his mysterious death, the media scrambles to get its story straight about white helmets founder James Le Mesurier

The White Helmets, Hala Systems and the Grotesque Militarization of “Humanitarianism” in Syria