White Book on Violations of Human Rights and the Rule of Law in Ukraine, published Dec. 2014 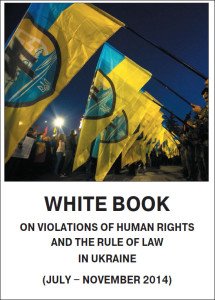 Published by the Ministry of Foreign Affairs of the Russian Federation, third edition, December 2014, 113 pages.

Pdf here: White Book on Violations of Human Rights and the Rule of Law in Ukraine, Dec. 2014.

Since the second edition of the “White Book” was published, the situation regarding the respect for, that is, in reality, the neglect for, human rights and the rule of law principle in Ukraine has significantly deteriorated.

The period covered by the Book (from July to November 2014) has been marked by blatant, mass and intentional violations of international humanitarian law, human rights and the rule of law by the Ukrainian armed forces and radical nationalist armed groups.

When the Book was prepared for being printed, specialized international organizations disseminated the information that, according to their calculations, the confirmed death toll of the Ukrainian crisis, in particular the “anti-terror” operation conducted by Kiev, was over 4,000 people killed and over 9,000 people wounded, including women, children, elderly people and disabled persons. It was specifically pointed out that the real and final death toll would significantly exceed these figures.

Approximately 2.5 million people are still in the areas of hostilities. As early as in October, the number of internally displaced persons in Ukraine came close to
415,000. According to the Federal Migration Service of Russia, the total number of Ukrainian citizens that found refuge from the bloody conflict on the territory of the Russian Federation goes beyond 830,000 (Russian households alone have taken in and given shelter to some 444,000 refugees from Ukraine).

Taking into account the flourishing and belligerent nationalism among Ukrainian politicians, their man-hating slogans, the support for neo-Nazi activities and torch-light parades in cities across Ukraine, these figures seem unlikely to stay the same. The Ukrainian authorities use against civilians in the south-east not only heavy armaments and combat aviation but also such barbarian kinds of weapons as incendiary weapons, phosphorus and cluster ammunition, MLRS “Grad” and White book on violations of human rights and the rule of law in Ukraine “Uragan”, ballistic missiles “Scarab B”, howitzers and 240-mm self-propelled mortars “2S4 Tyulpan”. This information has been confirmed by the media, eye- witnesses, recognized human rights NGOs, such as the Human Rights Watch and the Amnesty International, as well as reliable sources of some international journalists within the governments and intelligence in the West.

In October, as a result of a missile strike that targeted residential districts of Donetsk and was launched from the territory controlled by the Ukrainian armed forces and the National Guard battalions, children were killed again, which can only be described as a war crime against civilians.

Mass graves with bodies bearing signs of summary executions have been dis- covered in the Donetsk and Lugansk regions.

What can thus be traced is indiscriminate use of force by the Ukrainian army manifested in the use of prohibited means and methods of warfare.
298 people died in the crash of Boeing-777 of the Malaysia Airlines in the Donetsk region in July this year. An effective and unbiased investigation of this tragedy has not yet been conducted and is evidently being soft-pedaled, in violation of UN Security Council Resolution 2166 of July 21, 2014, and the rules of the International Civil Aviation Organization (ICAO), by those who are not interested in the truth being uncovered.

Due to Kiev’s military action, south-eastern Ukraine has found itself in what is a humanitarian disaster. According to estimates by UN experts, in some cities of the region, up to 60 per cent of houses have been partly or totally destroyed. As the President of Ukraine P. Poroshenko has admitted, 42 per cent of the industrial facilities and half of the infrastructure of the Donbass region has been destroyed.

As a consequence of the devastating attacks by the Ukrainian armed forces, facilities that are crucial for the survival and normal life of people, including hospitals (over 30 hospitals only in Donetsk — according to the UN), maternity clinics, kindergartens and orphanages, retirement homes, schools, universities, power plants, ETLs and pharmaceutical warehouses, have been put out of order. In many cities of the Donetsk and Lugansk regions, telephone communications and water and gas supply have been disrupted. An enormous number of people have lost their jobs, homes and basic livelihood.

Against this background, the various far-fetched obstacles created by Kiev and some countries in the West in the way of the practical efforts made by the Russian Federation to send a convoy with so much needed humanitarian aid to south-eastern Ukraine, looked cynical.

The evidence found by human rights activists, including Russian civil society organization “Foundation for Democracy Studies”, prove the infliction by the Ukrainian armed forces and security forces (the Army, the Ministry of the Interior, the Security Service, as well as radical nationalist “volunteer battalions”) of torture, cruel, inhuman and degrading treatment against the residents and prisoners from the South-East. Alongside such methods of torture as burning with red-hot objects, sending to a minefield, mock firing squads and throwing to a pit with dead bodies, there are records of water boarding — a torture technique that used to be popular with the American secret services when it came to their special prisons abroad, including one in the Guantanamo Bay.

The period under review has been marked by a steep deterioration of the situ- ation regarding freedom of expression and the restrictions against the media unwelcomed by Kiev. The International Institute for Reporter’s Protection and Safety has rated Ukraine as the most dangerous country in the world in terms of safety for reporters. In early August, A. Stenin, a photo reporter of the International Information Agency “Russia Today”, was killed near Donetsk.

During the said period, shootings, assaults, beatings and abductions have continued. There exists evidence of arrests and unfounded imprisonment of citizens that shared information on the real state of affairs in south-eastern Ukraine on the Internet.

The media scene in Ukraine is under severe political censorship. The authorities have cut off all Russian TV channels that were popular in Ukraine. Local officials that did not cut them off are facing criminal charges.

Repression and large-scale persecution of politicians whose views differ from Kiev’s cynical policy have been spurring fast. The methods applied include assassinations of political opponents, framing-up criminal cases, illegal search- es, confiscation of property, simple battery and hooliganism, e.g. “trash lustra- tion”, as well as other unlawful methods of intimidation that run against the principle of the rule of law and democratic standards. Early parliamentary elections in Ukraine that took place on October 26, 2014, were marked by an unprecedented number of cases of flagrant violation of fundamental international standards for democratic elections reported during the election campaign, on the day of the election and during the vote count. This situation and its roots have been studied in detail in the analytical report White book on violations of human rights and the rule of law in Ukraine concerning those elections, drawn up by the Central Election Commission of the Russian Federation.

Factually, this Book, just like its first two editions, is based on the results of a detailed monitoring of international, Ukrainian and Russian media, information provided by witnesses and bloggers, declarations and comments by the Ukrainian leadership, the security and law-enforcement agencies and armed groups that are participating in punitive operations against south-eastern Ukraine. Special attention has been paid to reports by the UN agencies, the OSCE and the Council of Europe, information provided by the ICRC, recognized international NGOs (the Human Rights Watch, the Amnesty International, etc.) and Russian civil society organizations (the Foundation for Democracy Studies, the Russian Public Council for International Cooperation and Public Diplomacy at the Civic Chamber of the Russian Federation, etc.).

Traditionally, each part of the Book is preceded by citations of fundamental provisions of international instruments dealing with human rights and international humanitarian law.

As before, we see it as the main objective of the “White Book” to attract the attention of the international community, human rights organizations and institutions, the media and all people interested to the real and catastrophic situation regarding human rights and the rule of law in Ukraine that has persisted since the unconstitutional coup in Ukraine.

All the crimes committed in Ukraine during the period described in all three books must be objectively investigated under effective international control and those guilty should be brought to justice. There must be no impunity.