While demanding Assange, US refuses to extradite CIA agent who killed British teen 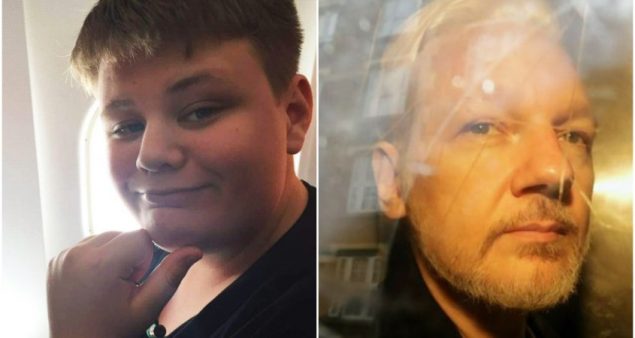 High-ranking CIA agent Anne Sacoolas is charged with killing a teenaged British citizen. While the US demands Julian Assange’s extradition, it refuses to give up its spy. And Boris Johnson seems to be rolling over.

The American charged with striking and killing 19-year-old British citizen Harry Dunn while driving on the opposite side of the road in the United Kingdom near a US Air Force listening post was a high-ranking CIA agent. While the US refuses to extradite her to the UK, the British government is going full speed ahead with the extradition of Wikileaks editor Julian Assange to the land of the free.

Anne Sacoolas was leaving the base with her 12-year-old son in the passenger seat when she collided head-on with the teen, sending him hurtling over the SUV.

Sacoolas was subsequently exposed as having been a CIA officer, as was her husband. Yet the British government listed her husband, Jonathan Sacoolas, as a diplomat and falsely informed Dunn’s family that she worked for the State Department. Thus they concealed from the bereaved family the real reason the US was so adamantly opposed to having Anne Sacoolas brought before a British court.

The family of Harry Dunn has been hunting for answers since the grisly death of their son in August. How was it that the reckless driver – the wife of Jonathan Sacoolas, who was stationed at the RAF Croughton base – could claim diplomatic immunity?

As attorney for six women in Epstein/ Prince Andrew matters, I am joining forces with the family of UK teen Harry Dunn to say: no one is above the law. Press conference tomorrow. pic.twitter.com/72YtrasY4A

As it turns out, a “special arrangement” between the US and the UK allowed for those stationed at the spy base to claim diplomatic immunity for themselves and their dependents. While Anne is reportedly no longer a CIA agent, her husband Jonathan is reportedly a “senior spy.” The base that served as their home in the UK processed a third of US military communications in Europe.

RAF Croughton base is known to house agents from the NSA and CIA. It is not the first time that the post has sparked an international incident; the base was exposed by NSA whistleblower Edward Snowden for forwarding information from German Chancellor Angela Merkel’s phone to the CIA.

As former British diplomat Craig Murray first revealed, the names of the Sacoolases did not appear on the UK’s official Diplomatic list. Thus, neither had a right to claim diplomatic immunity.

While President Trump has called Jonathan a “diplomat,” and Anne was working for the State Department when the two married, CIA agents working abroad typically do so under diplomatic cover.

Big allegation from Harry Dunn’s family spokesperson @RaddSeiger: “sadly the family believe the @foreignoffice were complicit in her (Anne Sacoolas’s) departure & are now engaged in a cover up. The refusal to hold an enquiry merely supports that belief”.

Anne Sacoolas reportedly claimed diplomatic immunity in an interview with police the day after the crash. The Northamptonshire Police filed for a waiver to her immunity, but it was rejected by the Foreign and Commonwealth Office. The family of Harry Dunn was not privy to this fact until after Anne had fled the UK on a US Air Force aircraft. Local police had also not been informed of Anne’s departure.

Radd Seiger, a spokesman for the victim’s family, stated at a press conference a few months after the crash: “The family have lost all faith and confidence in both the police and the Foreign Office. There is a clear breach of the victim code here – first and foremost they did not tell the family for a number of weeks that she had gone.”

In October, the Dunn family visited the White House and met with Donald Trump. According to Seiger, Trump tried to buy off the couple, promising them that Treasury Secretary Steven Mnuchin was “standing by ready to write a check.” Trump reportedly blindsided the couple, telling them that Sacoolas was in the other room waiting to meet with them. The couple refused the offer.

Incredible detail from Radd Seiger, the spokesperson for Harry Dunn’s family. He tells #BBCBreakfast how their meeting with @realDonaldTrump was ‘ambushed’ as they were told – by the President – that Anne Sacoolas was waiting in the next room!!! They refused to meet her. pic.twitter.com/1S2pg5Lf4F

In December, Sacoolas was officially charged in the UK with causing death by dangerous driving. Then, this January, the Home Office filed a formal request for her extradition. But later that month, Secretary of State Mike Pompeo rejected the demand. In an appearance on British broadcaster LBC, Pompeo dodgedquestions about the extradition.

The lawyers of Sacoolas have stated, “Anne will not return voluntarily to the United Kingdom to face a potential jail sentence for what was a terrible but unintentional accident.”

While the Home Office said the rejection of the extradition request “appears to be a denial of justice,” Sieger quickly called on Prime Minister Boris Johnson to take action, calling him “the leader of the gang.”

Good meeting with @SecPompeo covering the many future opportunities for the 🇬🇧 & 🇺🇸. We discussed the US Middle East peace plan, Iran & other shared priorities. I underlined our continued commitment to justice for Harry Dunn and his family. pic.twitter.com/8P09FZGVIG

“Boris Johnson wanted to be Prime Minister, he is now being tested severely. I expect him today to rise to that challenge and come and meet with me and the family and tell us what he’s going to do about it,” Sieger said after the extradition request was denied.

The family has still yet to meet with Johnson despite repeated pleas. More recently, Sieger has accused the government of “making lots of public noise” but “deliver[ing] nothing of substance.”

While the extradition of Sacoolas is at an indefinite impasse, the British government will begin extradition hearings for Wikileaks editor Julian Assange on February 24. Assange’s lawyers will arguethat the request is politically motivated.

Through a tragic collision, the Dunn family is learning the same lesson that Assange’s imprisonment illustrates. Their government is colluding with the United States to ensure that war criminals are pardoned, war crime whistleblowers are imprisoned, and the CIA remains above the law.

Alexander Rubinstein has covered foreign policy, police, prisons, and protests for a variety of publications including The Grayzone and Mint Press News.