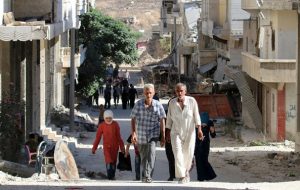 Attached is a 33-page information primer by Robert Roth titled ‘What’s really happening in Syria: A consumer fraud lawyer’s mini-primer’. Below is the introduction to the document. To read the document, click on the document attachment symbol below.

Robert Roth is a retired public interest lawyer. He enforced consumer fraud and protection law as an assistant attorney general for New York (1981-1991) and Oregon (1993-2007).

If you try to follow events in the mainstream media (MSM), you may have noticed that they routinely refer to Syrian president Bashar al Assad as a “brutal dictator”. Assad is supposed to have responded to peaceful protests with repressive violence and by “killing his own people”. The U.S., UK, Saudi Arabia, and Qatar continue to maintain that “Assad must go”.

I disagree with all of that, as I’ll explain in this article.

I spent 25 years prosecuting lies in commerce for the attorneys general of New York and Oregon. I prepared this primer to help you cut through the lies and get at the truth about Syria.

It’s still quite possible that a nuclear war could arise from careless U.S./NATO confrontations with Russia in Syria. President-elect Trump has indicated he favors a cooperative relationship with Russia, but he will face continuing pressure from the Deep State, neocons, and apparently, the media, to continue the New Cold War that was initiated in Ukraine. And the demonization of Russian president Putin and of Russia itself has been going on for some time and shows no sign of letting up.[i]  So in addition to the suffering of the Syrian people, which has been horrific and continues as I write, the conflict in Syria also poses a serious threat to all of us.

Apart from this introduction and some other brief statements of my own, most of this article is a string of excerpts from the excellent work of other people I’ve come to trust and citations or links to sources for further information and analysis.

[i] While I don’t know as much as I hope to learn about the Deep State or “shadow government,” I use those terms to refer to a collection of individuals and structures that appear to have had substantial influence on the policies of several administrations, and to be in part responsible for the continuity of U.S. foreign policy from one administration to the next, especially since the Reagan administration. For an elaborate discussion and analysis, see Mike Lofgren, Anatomy of the Deep State (February 21, 2014), at http://billmoyers.com/2014/02/21/anatomy-of-the-deep-state/. Ron Paul’s much briefer  statement regarding pressure on Trump from the Deep State and “shadow government” seems to me right on the money; see “Trump should resist neocon & shadow gov’t influence to justify people’s hopes – Ron Paul to RT” (11 Nov, 2016), at http://on.rt.com/7upw. (By the way, I take the recent efforts to discredit RT.com as a credible source of useful news and information to be disinformative, part of the larger effort to discredit Russian president Putin and apparently, Russia itself.)  And although I don’t necessarily endorse every word of it, perhaps in part, again, because I don’t as yet know as much as I hope to, Paul Larudee’s 4-page piece on the neocons (short for “neoconservatives,” although their policies are anything but consistent with what has traditionally been called conservatism) is word-for-word the most informative I’ve seen, including identification of the neocons, a short summary of their history, and their linkages with a number of so-called “think tanks.” See “The Neocon in the Oval Office” (August 31st, 2016), at http://dissidentvoice.org/2016/08/the-neocon-in-the-oval-office/.

The hysterical allegations of Russian hacking to interfere with the recent U.S. election are a prime example of the baseless demonization of Russia. An organization of intelligence veterans who have the expertise to know point out that U.S. intelligence has the capability of presenting hard evidence of any such hacking and has not done so. Veteran Intelligence Professionals for Sanity state bluntly:  “We have gone through the various claims about hacking. For us, it is child’s play to dismiss them. The email disclosures in question are the result of a leak, not a hack.”  They then explain the difference between leaking and hacking. See U.S. Intel Vets Dispute Russia Hacking Claims (December 12, 2016), https://consortiumnews.com/2016/12/12/us-intel-vets-dispute-russia-hacking-claims/.