What does PDVSA have to do with the crisis in Haiti? 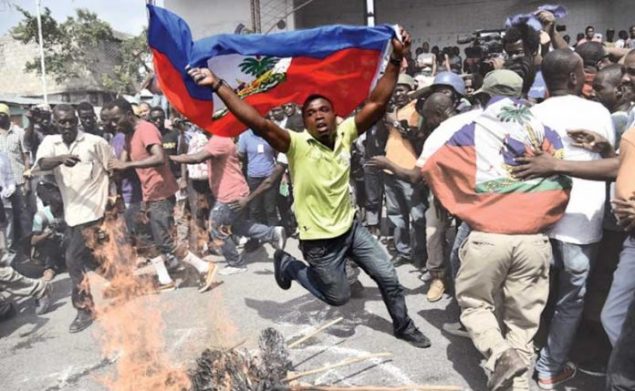 Supuesto Negado writer Clodovaldo Hernández takes a look at the collapse of Venezuela’s oil production and PetroCaribe in relation to the protests in Haiti.

Published in English on Venezualanalysis, Nov 22, 2019

Haiti has been on fire for weeks, without the so-called ‘international community’ or its associated press paying any attention.

Fuel shortages have plunged the Caribbean country back into social turmoil which borders on civil war. There are many causes behind this dramatic panorama, which has been exasperated by the decrease in production by Venezuelan state-run oil company PDVSA, corruption scandals in the Caribbean country and relentless US pressure on Venezuela, which have all damaged the PetroCaribe crude oil supply programme, which Haiti was reliant on.

PDVSA’s internal collapse, coupled with the labyrinth of obstacles placed by the US’ unilateral coercive measures (sanctions) against Venezuela, has forced the dismantling of what was one of Commander Hugo Chavez’s most powerful initiatives.

The project is a regional mechanism for selling oil at preferential prices with financing for the residents of the Antillean Basin. Local opposition groups and the Washington-led international coalition have, however, always branded the programme as a way for Venezuela to ensure support in the international arena based on the so-called ‘petro-chequebook.’

Before the programme was damaged by PDSVA’s fall in production and the blockade [against Venezuela], there were already revelations of financial irregularities by unscrupulous Haitian civil servants and entrepreneurs who took advantage of Venezuelan aid to line their own pockets.

In Haiti, these crimes are particularly outrageous because the programme was conceived as a way of providing financial assistance to the government to address serious internal problems, exacerbated by the 2010 earthquake and five major hurricanes, including Hurricane Matthew in 2016.

Under the programme, PetroCaribe delivered crude oil to a state agency called the Monetisation Bureau of Development Aid Programmes, which proceeded to sell it to private Haitian companies. The resulting funds should have been used to rebuild infrastructure, especially in the areas of health, education, housing and roadways, however around US $2 billion is estimated to have been stolen.

The responsibility of Venezuelan officials in this and other Petro Caribe- related corruption cases remains to be seen.

The issue of corruption is so important in the Haitian political debate that in addition to demanding the resignation of pro-US President Jovenel Moise, the opposition and Haitian grassroots movements, which have led the wave of demonstrations in recent months, also demand the prosecution of those involved in irregularities that distorted the initial objectives of the programme. Opposition Deputies Youri Latortue, Moise Jean Charles and Shiller Louidor have been the flag-bearers of these demands.

In parallel, and in accordance with Washington’s instructions, the Haitian government of businessman Jovenel Moise, which is propped up by the US, has preferred to sever its relationship with PetroCaribe, supposedly to distance itself from the influence that revolutionary Venezuela exerted on previous Haitian presidents, such as René Preval and Michel Martelly.

Moise (whose name also appears amongst the list of alleged benefactors from the theft of PetroCaribe funds) was snared with promises that the US would supply the oil that Venezuela would no longer deliver. But that obviously hasn’t happened.

As the country ran out of fuel, what has been described as Haiti’s worst political crisis has erupted. The nation has lived in perennial instability due to, among other reasons, the continued interference of the US in its internal affairs.

Apart from Haiti, the PetroCaribe programme favoured Antigua and Barbuda, the Bahamas, Belize, Cuba, Dominica, Guatemala, Guyana, Grenada, St. Kitts and Nevis, St. Lucia, St. Vincent and the Grenadines, El Salvador, the Dominican Republic and Suriname. Guatemala and Belize abandoned the agreement in 2014 and 2017 respectively, and in June 2018 Venezuela announced that it was suspending shipments to all these nations due to a drop in production, with the notable exception of Cuba.

Denouncements of irregularities [in the programme’s funds] were well exploited by Venezuela’s opponents to discredit the project between 2016 and 2018. Simultaneously, the US toured the Caribbean offering to supply US oil extracted through fracking in exchange for support for its aggressive political moves against the Venezuelan government of Nicolas Maduro. Of course, in the US’ case, we aren’t talking about a social programme but rather winning the Caribbean market for its oil corporations, while continuing to strangle Venezuela economically.

In 2018, a Caribbean Energy Security Summit was held in Washington, which mentioned adopting sustainable renewable energy systems for the region. The political purpose, the true one, was later expressed by a spokesman for the US State Department: “That the Caribbean doesn’t increase its debt to the only energy supplier which has attended the region to date.”

PDVSA’s inability to continue honouring the programme, in addition to corruption scandals in countries like Haiti, allowed this goal to be achieved just as the US wished.

Now, the entire Caribbean region once again depends on the savage capitalism’s suppliers , and Haiti’s social protests are one of the first symptoms of this return to the harsh reality.

Clodovaldo Hernández is a Venezuelan journalist who has written for left leaning news sites Supuesto Negado and Aporrea.

Translation by Paul Dobson for Venezuelanalysis.