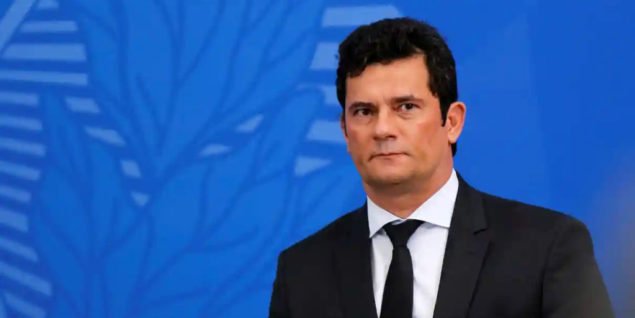 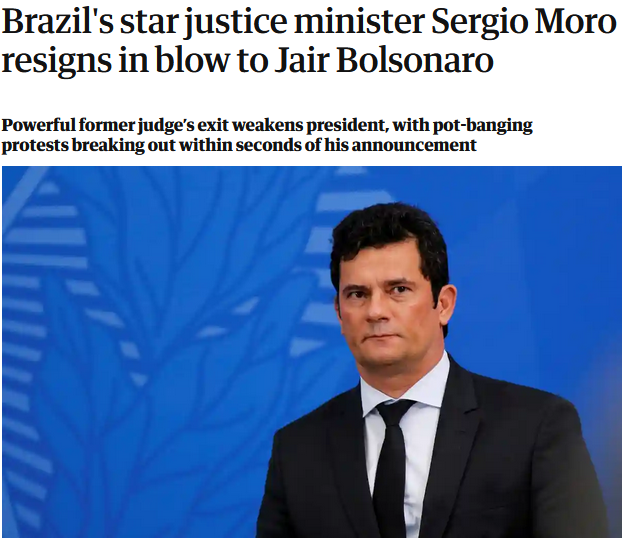 The Guardian (4/24/20) described “the celebrity Justice Minister Sergio Moro” as “one of the most popular and powerful figures in Jair Bolsonaro’s far-right administration.”

Brazilian Justice Minister Sergio Moro resigned from his post in the far-right Bolsonaro government on April 24, accusing the president of “political interference” in the country’s police force.

Western corporate media apparently saw no irony in the allegations made by the former judge, who played an instrumental role in an “anti-corruption” witch hunt aimed at illegally jailing former President Luis Ignacio “Lula” da Silva and destroying his left-wing Workers’ Party.

The majority of the press, including the BBC (4/25/20), Washington Post (4/24/20), Reuters(4/24/20) and Deutsche Welle (4/24/20) scandalously omitted any mention of the bombshell whistleblower revelations published by the Intercept’s Glenn Greenwald (6/9/19). The thousands of hours of leaked conversations on the Telegram platform between Moro and prosecutors with the operation codenamed Lava Jato, or “Car Wash,” showed the former not only illegally giving instructions on how to improve the accusations he was responsible for impartially evaluating, but also advising the prosecutors on how to smear Lula in the media (FAIR.org, 11/14/19).

A few outlets did mention the revelations, but dismissed them as “claims [Moro] had improperly plotted to jail Lula” (Guardian, 4/24/20) or buried them in a single line in the 17th paragraph (Bloomberg, 5/6/20). 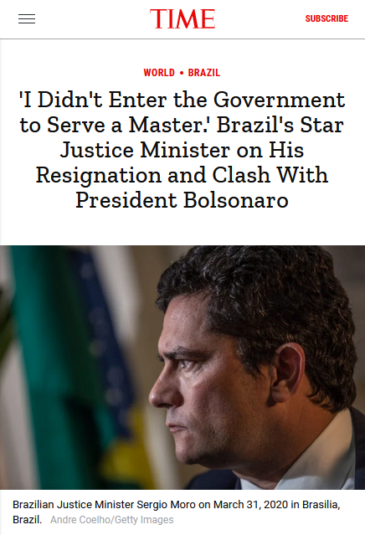 The harshest criticism Time (5/21/20) allows of Moro is a journalist saying, “We have law enforcement and judges bulldozing due process and bending the rules in order to do the right thing.”

Time did the heavy lifting, however, in whitewashing Moro, whom it had extolled in their “100 Most Influential People” list of 2016 (4/21/16). London-based journalist Clara Nugent (Time, 5/21/20) penned a hagiographic profile of the former judge, headlined: “’I Didn’t Enter the Government to Serve a Master.’ Brazil’s Star Justice Minister on His Resignation and Clash With President Bolsonaro.”

In the exclusive interview, Nugent—whom FAIR.org (5/20/19) previously exposed for spreading falsehoods about media “censorship” in Venezuela—dutifully labored to scrub Moro’s tarnished reputation of any trace of systematic US-sponsored lawlessness. Sympathetically describing him as a “somber bureaucrat” whose “scowl…tends to be a bad omen for Brazilian presidents,” the corporate journalist wrote off Moro’s well-documented criminality in the Lava Jato lawfare operation as “controversy”:

But Moro’s conduct during the investigation also attracted controversy. In March 2016, he shocked many Brazilians when he sent the audio of tapped phone conversations between Lula and then-President [Dilma] Rousseff to the media.

Nugent omitted the crucial detail that, as Brian Mier reported for FAIR.org (11/14/19), the wiretap on Rousseff was illegal, as was the leak to the press. Rather, she repeated the false claim that “Rousseff had appointed Lula as her chief of staff, allegedly in order to shield him from Car Wash prosecutors,” ignoring that Moro had edited the recording to make it appear incriminating. In fact, the real purpose of the appointment was to enlist Lula in resisting a parliamentary coup against Rousseff, and had nothing to do with Lava Jato.

The Time reporter did admit that the leak “was decisive in building the public outrage that underpinned Congress’ drive to impeach Rousseff four months later, on charges of manipulating government financial data.” But she declined to add that “manipulating government financial data” was actually a common budgetary infraction known as “fiscal pedaling,” which was legalized by the Brazilian Senate one week after Rousseff was removed from office (CounterSpin, 12/12/18).

Like her corporate colleagues, Nugent went on to dismiss the Intercept revelations exposing Moro’s rampant misconduct as mere allegations, despite later quoting the former minister confirming the veracity of their content:

In July 2019, investigative site the Intercept published a trove of messages which they said showed that, as a judge, Moro had inappropriately consulted with federal prosecutors on strategy to take down high-profile figures.

Nugent failed to mention that the “strategy” in question was to convict Lula—who was leading all polls for the 2018 presidential race—for “indeterminate acts of corruption,” with prosecutors secretly admitting just hours before the final trial that they had no evidence, but that Moro would deliver a conviction anyway. In a particularly egregious omission, she hid the fact Moro and Lava Jato prosecutors illegally spied on Lula’s defense team—a grave offense that would have had Moro disbarred in most countries.

She was also happy to indulge Moro’s mystifications that “it was never a personal issue with ex-president Lula,” suppressing the fact that Lava Jato prosecutors had conspired to muzzle Lula on the eve of the election, and that task force leader Delton Dallagnol had said he was literally “pray[ing]” that Bolsonaro would win. 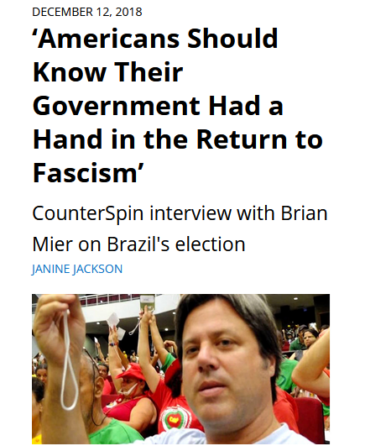 Brian Mier on CounterSpin (11/30/18): “The judge, Sergio Moro…was allowed to rule on his own investigation, with no jury, an eccentric Brazilian legal tradition, which goes back to the Inquisition.”

Time joined the rest of the Western media in likewise concealing the public and notorious US hand in the lawfare operation (CounterSpin, 12/12/18). Neither Nugent nor her counterparts reported that Lava Jato was a joint investigation with the US’s Department of Justice and Securities and Exchange Commission. The two agencies collected billions in fines from Brazilian companies that were considered strategic for national development, including construction giant Odebrecht, state aircraft manufacturer Embraer and state oil firm Petrobras. Meanwhile, Moro ordered Odebrecht and other implicated construction companies to paralyze their projects, causing 500,000 job losses and an estimated 2.5% fall in GDP in 2015 alone. The US-backed economic coup paved the way for the 2016 parliamentary coup and the fraudulent 2018 election, in which the baseless corruption accusations against Lula and Dilma were decisive (CounterSpin, 6/28/19).

Much of that coordination between the prosecution task force overseen by Moro and US agencies was informal and illegal, because it was not authorized by the Brazilian Foreign Ministry. In one particularly damning Telegram message, Dallagnol told Moro that decisions regarding the investigations “depend[ed]… on the Americans.” During his tenure as “super-justice minister,” Moro further opened the door to US infiltration in legally dubious ways, expanding US cooperation with prosecutors and police, creating an intelligence “fusion” center with FBI participation in the Tri-Border Region, and sharing sensitive biometric data with the agency.

Time, along with the entirety of Western corporate media, unsurprisingly turned a blind eye to this grave breach of Brazilian sovereignty. More surprising was their total concealment of Moro’s far more flagrant acts of lawlessness while serving as top cop. Moro sought to obstruct an investigation in which he was a possible defendant, attempting to destroy evidence that he had interfered in the 2018 presidential election to thwart a Workers’ Party victory. In particular, he tried to prevent the release of the Intercept leaks, while also publicly ordering the illegal destruction of proof seized from hackers imprisoned by the Federal Police, which likewise implicated him in crimes committed during Lava Jato.

The Western press also censored any mention of the fact that Moro may be very likely implicated in the “explosive” allegations (Time, 5/21/20; Guardian, 4/24/20) he made against Bolsonaro, which has led the Supreme Court to open an inquiry. The probe will not only look into the eight alleged crimes committed by Bolsonaro, but will also examine whether Moro had prior knowledge of them and refused to go public until leaving the government, which would constitute a crime of “official misconduct” under Brazilian law.

In rehabilitating Moro as a “whistleblower,” corporate journalists hide their own role in shamelessly promoting the Washington-backed lawfare operation that ousted Brazil’s first female president, and installed a neo-fascist whom they now scapegoat as the posterboy for murderous coronavirus denialism (FAIR.org, 4/12/20).

Bolsonaro certainly has ample blood on his hands. But Moro, his US sponsors and the imperial media share full responsibility.