Western media is awash in bomb conspiracy theory over the crash of Kogalymavia (Metrojet) Flight 9268 over Sinai, Egypt on Oct 31, 2015. An example is yesterday evening’s lead news stories on the Canadian Broadcasting Corporation [television report here and radio report here (four minute mark)]. CBC tells its audience that an unidentified Egyptian investigation official has told other media outlets that he is “90 per cent sure” that a bomb brought down the airplane. The CBC presents this as journalism you can count on. 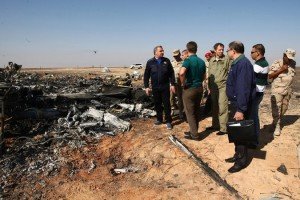 Investigators at site on Nov 2, 2015 of Russian airline crash in Sinai (EPA)

That’s as close to proof of a bomb that any Western news agency can get because that’s all there is to feed on. Only the official investigations can prove whether or not a bomb brought down the plane and they have yet to do so. In the meantime, one news outlet reports the speculation of another news outlet and the spinning cycle turns. “An unidentified official says… which CNN (Reuters, etc, etc) is reporting…” and so on.

We don’t know yet what happened to Kogalymavia Flight 9268 on the morning of October 31. Presumably we will soon learn, unlike the crash of Malaysian Airline Flight 17 over eastern Ukraine last year whose investigation, 16 months later, remains deeply compromised by political prejudice and intervention.

From Reuters on Monday, Nov 9, 2015: (this is the source of the aforementioned reports on CBC)

Investigators of the Russian plane crash in Egypt are “90 percent sure” the noise heard in the final second of a cockpit recording was an explosion caused by a bomb, a member of the investigation team told Reuters on Sunday…

Lead investigator Ayman al-Muqaddam announced on Saturday that the plane appeared to have broken up in mid-air while it was being flown on auto-pilot, and that a noise had been heard in the last second of the cockpit recording. But he said it was too soon to draw conclusions about why the plane crashed…

Asked to explain the remaining 10 percent margin of doubt, the investigator declined to elaborate, but Muqaddam cited other possibilities on Saturday including a fuel explosion, metal fatigue in the plane or lithium batteries overheating.

There is no sensible reason for Russian and Egyptian investigators to hide what their investigations find for the sake of their respective tourism and aviation industries because any outcome–bomb, poor security at Sharmel-Sheikh airport, faulty maintenance or manufacture of the doomed airplane–is bad news for them.

Interestingly, it would be very bad news for Airbus if the source of the crash is traced to faulty design of its airplane, an 18 year old Airbus 321-200. At issue, specifically, would be the very high amounts of composite materials that are used in the structure of Airbus aircraft in place of the arguably safer aluminum structural components of yesteryear. The list of Airbus crashes or near misses due to failure of composite-material structural components is disturbingly long, including Air France Flight 447, an Airbus 330-200 that disappeared over the Atlantic Ocean on June 1, 2009 and American Airlines Flight 887, an  A300-600 which crashed in New York on Nov 12, 2001. All crew and passengers on those flights perished.

The following analysis examines the political consequences if it is proven that a terrorist bomb brought down Kogalymavia Flight 9268.

If the Sinai crash was terrorism, its timing was perfect for the West

A sketch by the late lamented U.S. comedian Bill Hicks involved a U.S. general at a press conference. “‘Iraq has incredible weapons. Incredible,’ the general said. ‘How do you know that?’ he was asked. “Oh, well, uh – we looked at the receipt.’”

In the aftermath of the Russian airplane crash in Egypt last week, Britain in particular has been quick to claim that the crash was the result of a “terrorist bomb”, presumably planted by Islamic State (previously ISIS/ISIL). So what is it that makes Cameron so sure that the terrorist group created by his Syria policy has the necessary training, equipment and wherewithal to carry out that attack? Did he look at the receipt? What is clear is that if the plane was brought down by a bomb, and that bomb was planted by ISIS, it marks a major development for the group.

According to Raffaello Pantucci, of the Royal United Services Institute, an attack of this kind by ISIS would “herald an unseen level of sophistication in their bomb-making, as well as the ability to smuggle a device on board.”

But as well as a new technical feat, such an attack would represent an alarming change in tactics. The Times argues: “If the plane crash did turn out to be the work of an Islamic State affiliate in Sinai, it would mark a significant departure for the jihadist group, which had yet to launch a large-scale attack against civilians.”

So, if the plane was indeed brought down by an ISIS-in-Sinai bomb, either the group has suddenly been blessed with some amazing new technology, or it has suddenly decided to change tactics to mass killings of civilians. If the latter, isn’t it a little odd that, after more than a year of Western airstrikes apparently targeting it, ISIS has failed to launch such an attack against Western civilians yet is able to respond within weeks to a campaign of Russian airstrikes which, according to the West, are not even aimed at them?

Either way, the crash couldn’t have been timed more perfectly from the point of view of Western geopolitics. After four years of setbacks, the West’s Syrian “regime change” operation (that euphemism for wholesale state destruction) now faces the prospect of imminent total defeat courtesy of Russia’s intervention. And options for how to salvage that operation are very limited indeed.

Full scale occupation is a non-starter. Following Iraq and Afghanistan, both the U.S. and British armies are now officially incapable of mounting such ventures. The Libya option – supporting death squads on the ground with NATO air cover – has always come up against Russian opposition, but has now been effectively rendered impossible. And relying on anti-government death squads alone is simply very unlikely to succeed, however many TOWs and manpads are feverishly thrown into the fire; after all, there are only so many terrorists and mercenaries who can be shipped in, and, as writer Mike Whitney has put it, the world may have already reached “peak terrorist”.

Forcing Russia out – and turning U.S. and British airpower openly and decisively against the Syrian state – has thus become a key objective for Western planners. But how to do it? What would turn Russians against the intervention? The Times wrote: “So far, the war in Syria has been quite popular….[but] if it turns out that the war prompts terrorists to wreak vengeance on ordinary Russians by secreting explosives on planes, that gung-ho attitude could change.” Or at least, that is presumably what the Times hopes.

And downing the plane on Egyptian soil just before Egyptian President Abdel Fattah al-Sisi’s first state visit to Britain? Egypt is at a historical crossroads. Having moved from the socialist camp into the West’s “orbit” during the Sadat era in the 1970s, Egypt’s leadership has become ever less willing to be dictated to by Washington and London: a process that began in the latter part of Mubarak’s rule, and has continued under Sisi. Along with Russia, Egypt has played a leading “spoiler role,” as Sukant Chandan puts it, in the West’s regime change operation in Syria – and has not been forgiven for it.

In addition, Mubarak’s government had been dragging its feet on the privatization and “structural adjustment” demanded by the IMF: and tourism was and is a major source of income helping to reduce the country’s dependence on the international banksters. But since last Saturday, all that is now in the balance; as the Financial Times commented, suspicions that the crash was caused by a bomb “are likely to prove disastrous to the country’s struggling tourism industry.”

Britain’s foreign secretary Philip Hammond agreed. “Of course, this will have a huge negative impact on Egypt,” he announced matter-of-factly, following Britain’s decision to stop British flights to Egypt – seemingly without an ounce of regret. The likely massive loss of tourist income will force the Egyptians to go back to the IMF, who will, of course, demand their pound of flesh in the form of mass privatizations and “austerity”.

But it is not only Egypt’s economic dependency on the West that will be deepened by the crash. Britain, in particular, appears to be using the crash as leverage to re-insinuate itself into Egypt’s military and security apparatus. Firstly, British officials have been taking every opportunity to humiliate Egypt, trying to convince the world that Egypt is perilously unstable and that only by outsourcing security to the West can it be safe again. When Sisi arrived in the country this week, noted the Times, “Britain openly contradicted the Egyptian leader and suggested that he was not in full control of the Sinai peninsula,” whilst an Egyptian official “commented that the dispatch of six officials to check the security arrangements at Sharm el-Sheikh airport was ‘like treating us as children.’”

Finally, of course, the British government has not missed the opportunity to use the tragedy to push for deeper British involvement in Syria. Michael Fallon, Britain’s Defence Secretary, has been spending the last two days explaining how the case for bombing Syria would be strengthened if it were proven the plane was brought down by ISIS. Quite how more deeply insinuating one of the death squads’ leading state backers into Syria would somehow reduce the power of the death squads is, of course, not explained; such is the nature of imperialism.

In a world, then, where Western power is in steep decline, terrorism is fast becoming one of the last few viable options for extending its hegemony and undermining the rising power of the global South. If this attack does turn out to have been conducted by ISIS, how kind it will have been of them to take it upon themselves to act as the vanguard of Western imperial interests. And how obliging of the hundreds of Western agents in the organization not to do anything to stop them.