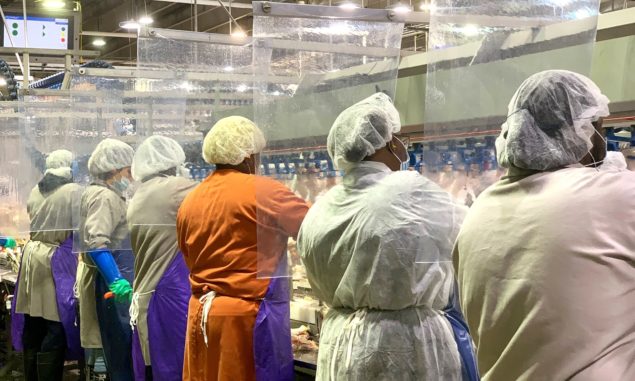 Workers describe a pattern of alleged negligence at plants run by some of America’s largest food manufacturers during the COVID-19 pandemic.

By Oliver Laughland and Amanda Holpuch

“It was like they were keeping a secret,” said Tara Williams, a 47-year-old worker at the plant, as she described her account of management’s response to the death of her colleague Elose Willis. “It took them about two weeks to just put a picture up, to acknowledge she had died.”

Williams had worked alongside Willis in the “de-boning” section of the plant until she died on 1 April, aged 56. She had spent 35 years at the facility – five days a week, 10 hours a day, 100,000 slaughtered chickens a shift.

Willis was the first Tyson employee to succumb to Covid-19 at the Camilla plant, but two others would follow in short succession, a marker of the precarity faced by thousands of meat processing workers pushed to toil, closely packed, on the frontlines throughout the pandemic in plants that have quickly become coronavirus hotspots. At least 20 meat packing workers have died from the virus nationwide and 5,000 have become infected, according to union officials, as close to two dozen facilities closed – some temporarily – over the past few weeks.

In interviews with poultry workers in Georgia, Arkansas and Mississippi a similar pattern of alleged negligence, secrecy and mismanagement emerged at facilities operated by some of the largest food manufacturers in America. The poultry industry, already the target of a sweeping civil lawsuit describing a systematic effort to depress wages among a workforce that is largely immigrants or people of color, found itself the beneficiary of an executive order issued by Donald Trump on Tuesday.

The president invoked the Defense Production Act (DPA) to mandate meat processing plants stay open during the pandemic. The White House has been reluctant to use the wartime act, which allows the president to order companies to fulfill work it deems necessary to national security. The DPA was used to push General Motors to make ventilators but few other companies have received such orders. 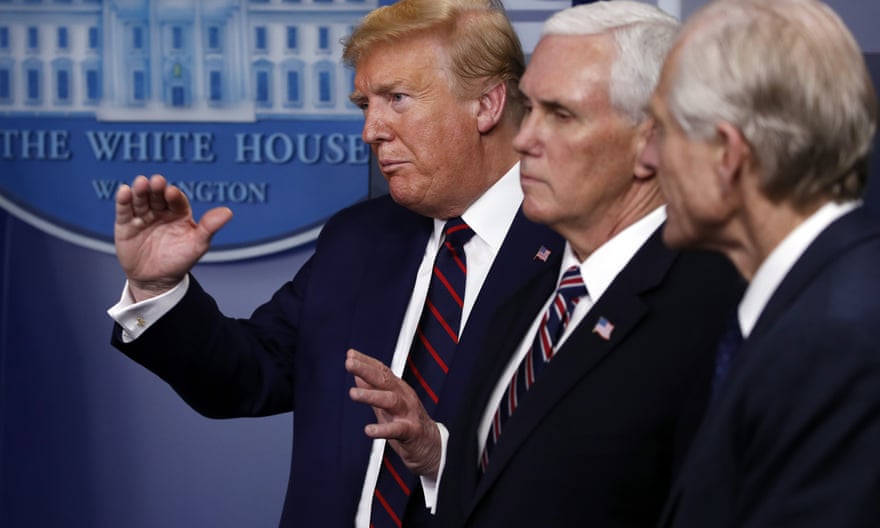 The move, which essentially labels meat production an essential service, also offers further measures to protect the industry from legal liability should more workers contract the virus. The order came within hours of Tyson, a $22bn company and the world’s second-largest meat processor, taking out paid adverts in major US newspapers, including the New York Times, to warn that recent closures of a handful of plants due to the virus could lead to “limited supply of our products”.

For Tara Williams, who has worked at the Camilla plant on the overnight shift as a packing scanner for five years earning $13.55 an hour, Trump’s executive order and her company’s adverts were another blow in her fight for workers’ rights.

“I was devastated and I was hurt. Because now, to be truthful – and excuse my language – Tyson really aren’t going to give a fuck about us at all,” she said. “For us employees that work in production, we are treated like modern-day slaves.”

The company is now measuring workers’ temperatures as they report for work, and began supplying surgical facemasks

A spokesman for Tyson disagreed with Williams’ account of the response to Willis’s death and said that managers held a moment of silence on “the day she passed away”. The company declined to provide numbers of infected workers at the Camilla plant or elsewhere “since this is an ever-changing situation” but characterized the numbers of positive Covid-19 workers at Camilla as “limited”.

The spokesman added that the company relaxed its attendance policy in March to “reinforce the importance of staying home when sick” and waived its waiting period to qualify for short-term disability and increased its coverage by 90% of normal pay until the end of June.

Tyson poultry workers are now being offered a $500 bonus to continue working. These will be paid twice, once in May and once in July and are contingent on work attendance.

Although the spate of deaths at Camilla led Tyson to deep clean the plant over a weekend, the facility did not close entirely, according to Edgar Fields, the vice-president of the Retail, Wholesale and Department Store Union.

The company is now measuring workers’ temperatures as they report for work, and began supplying surgical facemasks, but, according to Fields and workers interviewed by the Guardian, Tyson continues to suppress information on employees who have tested positive for Covid-19. 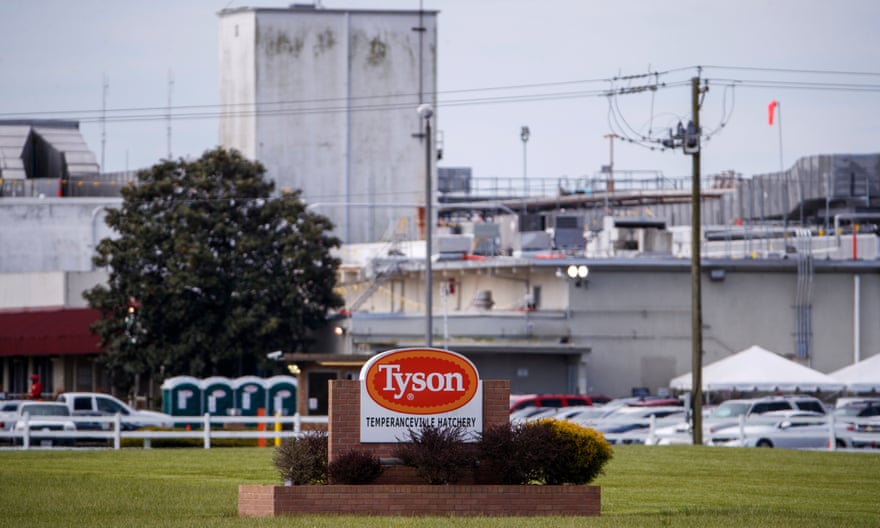 The Tyson Temperanceville Complex, which processes some 200,000-205,000 birds a day, in Virginia. The company is measuring workers temperatures as they report for work. Photograph: Shawn Thew/EPA

“For the last two months people have been dying from the coronavirus and we’ve been asking the White House to put something in effect to protect workers. Now, all of a sudden, with employees getting sicker and sicker, and fed up of going to work, Trump found it necessary to support big business,” Fields said.

The infectious disease epidemiologist Michael Osterholm warned deep cleans and surgical masks in these plants would not be sufficient to stop the spread of Covid-19.

“It’s in the air. And until we really get an airborne control program in place in these settings, I think we’re going to continue to see transmission”, Osterholm said on his podcast.

The situation was similar in Arkansas, where workers at a non-unionized Tyson poultry plant in Springdale have staged protests demanding full sick pay and compensated quarantine.

One worker, a central American migrant who spoke on condition of anonymity to protect her job, told the Guardian that the company was not enforcing social distancing.

The employee, who has worked at the plant inspecting chicken carcasses for 19 years earning $13.33 an hour, said she still felt unsafe going to work every day and worried about contracting the infection and giving it to her three children at home.

“We are all given bathroom breaks at the same time and there are hundreds of us waiting to use them. There are only seven bathrooms,” she said. “They [Tyson] don’t care about the worker. They don’t care if we get sick.”

A spokesman for Tyson said the company was taking “several measures” to allow social distancing but did not address the bathroom break allegations.

For more than a century, the meatpacking industry has been a symbol of how corporations are able to exploit workers in the name of efficiency. The Covid-19 outbreak has opened another chapter.

After seven weeks in the slaughterhouses of Chicago, the journalist Upton Sinclair wrote The Jungle, a 1906 novel which described the grim conditions inside. “There were things that went into the sausage in comparison with which a poisoned rat was a tidbit,” Sinclair wrote.

The novel created a media frenzy and prompted the US government to investigate the industry. A wave of consumer protection laws followed.

But these improvements masked the intent of Sinclair’s novel: to highlight the exploitation of immigrant labor and unchecked greed. Sinclair famously declared: “I aimed for the public’s heart and by accident hit it in the stomach.”

Advanced industrialization and globalization after the second world war exacerbated the exploitation of workers. Instead of the Eastern European immigrants who staffed slaughterhouses at the turn of the century, by the 1970s these factories were filled with workers escaping conflict in South America and Asia. Production grew exponentially and labor unions lost power. Advances in worker safety could not keep up and today, working in a processing plant remains one of the most dangerous jobs in the country.

The plight of Central American migrants in the meat industry was drawn into sharp focus last year when the Trump administration’s immigration enforcement agency (Ice) carried out its largest raid in years on four poultry facilities in Mississippi. They arrested 680 undocumented workers but none of the companies, which included the multibillion dollar Koch Foods, faced any charges over employment practices. 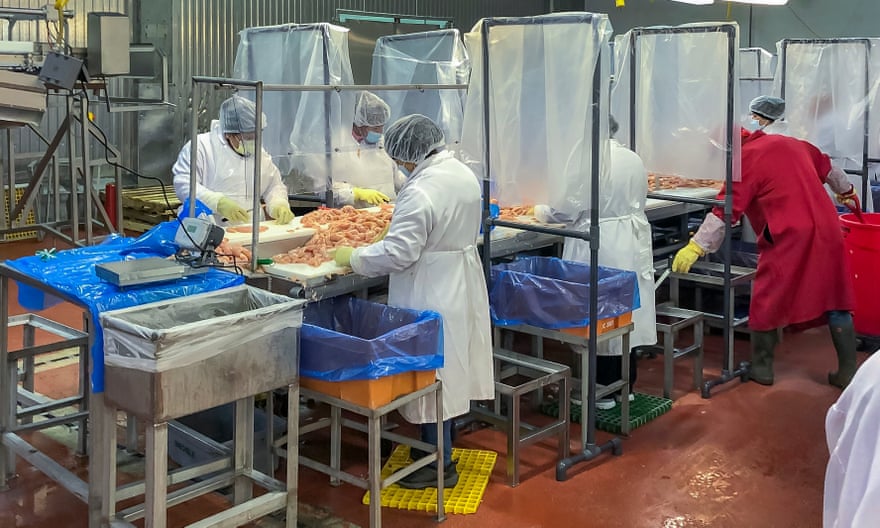 To fill the jobs left behind, many poorer African Americans took up work at the plants, which have also been hit by the Covid-19 outbreak.

One African American worker at a Koch facility that had been targeted by Ice, spoke to the Guardian on condition of anonymity. He alleged that while Koch had recently begun taking workers’ temperatures before shifts, they had also withheld details of any workers who contracted the virus. He claimed the company was now handing out surgical masks, but had forced workers to use them over two or three shifts.

“They ain’t offering nobody no disability, no unemployment, no time off,” the worker said. “I just keep my hands washed up, my face covered up, my whole body covered, and I pray to myself and hope I don’t catch it. The truth is there’s a chance that everybody in [here] will catch it.”

Koch Foods did not respond to multiple requests for comment.

I pray to myself and hope I don’t catch it. The truth is there’s a chance that everybody in will catch it

The sociologist Lourdes Gouveia has studied the meatpacking industry for three decades and said the Covid-19 outbreak is simply highlighting again the dangerous conditions in processing plants.

Gouveia said the industry has perfected a formula which allows it to maximize profit while producing relatively safe meat by resisting regulations and utilizing low cost, mostly immigrant, labor in unsafe conditions. “All of these elements are of a highly perfected formula or maximizing profits that is unlikely to change fundamentally,” Gouveia said.

But the outbreak has thinned the line between consumers and workers, laying bare again the dangerous working conditions in plants. Gouveia said: “This time, I’m not sure packers can manage the situation and hide everything under the rug about how they treat workers.”

Oliver Laughland is the Guardian’s US southern bureau chief, based in New Orleans

Amanda Holpuch is a reporter for Guardian US, based in New York.