We will not recognise the end of democracy when it comes… 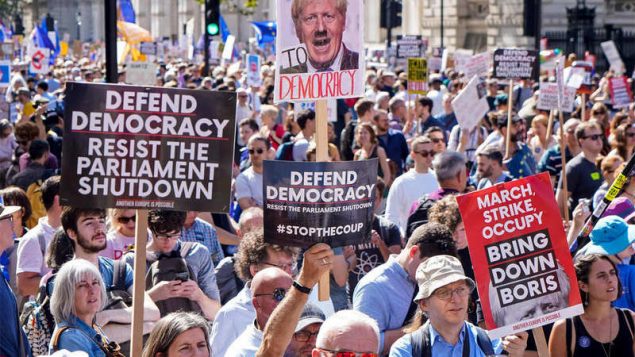 Prophets are usually wrong, but one thing I will prophesy; we will not recognise the end of democracy when it comes, if it does. Advanced democracies are not overthrown, there are no tanks on the street, no sudden catastrophes, no brash dictators or braying mobs, instead, their institutions are imperceptibly drained of everything that once made them democratic.

This extract from Lecture 5: Shifting the Foundations given in June 2019 by Jonathan Sumption, a former Supreme Court Judge,  offers an interesting reflection on the current crisis in democracy. What’s missing is the role of the people; but after all, he is an establishment figure.

Jonathan Sumption’s Reith Lectures: ‘We will not recognise the end of democracy when it comes.’

The British constitution is a hotchpotch of legislation, conventions and legal judgments, missing the formal text of most other liberal democracies. Couple this with the fact that the constitution also presides over four countries that are simultaneously amalgamated into one, and it would seem absurd to expect it to function.

Yet, function it has, and the United Kingdom’s constitution has a reasonable claim to be the longest functioning in the world, successfully muddling through centuries of constitutional evolution, including acts of union, mass enfranchisement, membership of the EU, and, to date, the UK’s departure from the EU. It is Brexit, however, that may finally bring the edifice down.

It is the future of the constitution that Jonathan Sumption has turned to in this fifth and final Reith Lecture, looking at how to reinvigorate the UK’s political community, but without wholesale reconstruction of our constitutional foundations. Some, who favour such fundamental reform, have suggested that we should consider moving towards a written constitution as a way of repairing our beleaguered body politic. It would allow us to re-emphasise our constitutional and democratic values, and with the restoration of the competencies that were loaned to the EU, clarify the relationship between the federal and devolved powers of the UK.

Sumption disagrees, arguing that the calls for a written constitution are the wrong answers to the right question, and that such high-minded ambitions ignore the reality of ‘the real problem in ourselves’. All a written constitution would do, from Sumption’s perspective, would be to move the UK further towards legal constitutionalism, abrogating the powers of our democratic bodies in favour of an ‘increase (in the powers) of judges’. His past lectures, discussed here, have seen him decry the expansionist tendencies of the UK’s judiciary, who are increasingly treading upon matters that are rightfully the domain of parliament, and a written constitution would do little but consolidate this reign of judges, without addressing the real fissures in our democracy.

Instead of engaging in root and branch reform, abandoning a constitution that has grown from the ‘habits, traditions and attitudes’ of our historical experience, Lord Sumption argues that we should take advantage of the flexibility of our ‘unwritten’ constitution. Much as devolution was able to accommodate the nationalistic yearnings of Scotland, Wales and Northern Ireland, ‘radically’ altering the internal workings of the state without upsetting the constitutional apple cart, so we should look to a similar solution to our current political ills.

Sumption raises legitimate concerns over the prospects of a written constitution being the solution to the ‘shattering of optimism’ that has taken place in democracy. He attributes the diminishing respect for democracy in western liberal democracies, and the increasing popularity of authoritarian norms, such as ‘a strongman willing to break the rules’, to the ‘remoteness of politicians’. The perception of politicians as insulated from the vicissitudes and vagaries of life, encapsulated by the expenses scandal, means that the populace is increasingly reluctant to respect their judgement.

Sumption’s solution to this, however, is fundamentally flawed. He suggests that voting reform, moving from the current system of first past the post to proportional representation, would reinvigorate the peoples’ engagement with politics, restoring the ‘horse trading that is a necessary part of building any kind of public consensus’.

The motivation behind such a reform seems to be to quieten the voices of the ‘hard-edged zealots and entryists with a very limited vision of the public interest’. Yet, this ignores the reality which is that proportional representation amplifies those voices, rather than muting them. The success of Farage’s Brexit party in May’s elections is a blaring alarm as to the risks of proportional representation. Knocking out a lynchpin of our constitutional framework, a voting system that has ensured strong majority governments and powerful parliaments, in favour of a system that intentionally leads to unstable governments reliant on bare majorities and fragile alliances, would be an act of constitutional vandalism.

Nor would it be possible to defend such vandalism on the basis that it serves a greater purpose, as it ignores the truly fundamental issue in our society, which is that there is no trust in the political class. Inviting a wider range of politicians to promise an ever broader range of unicorns to the people does nothing to resolve this. Instead, it is more likely to do the opposite, through placing even more weight on backroom deals and opaque transactions. Rather than bungs like the billion pounds given to the DUP being the exception in our politics, they will become the norm.

Through this neutering of the government, its (and parliament’s) ability to govern would be diminished. Stasis would become the default on controversial issues, parliament unable to make clear, long term decisions, instead dependent on muddled compromises. A likely outcome of this, and an ironic one, given Lord Sumption’s concern in previous lectures with the encroachment of the judiciary onto political terrain, is that the courts will step into the breach. The rise of powerful, interventionist courts in countries which use proportional representation, like Germany and Israel, is a clear indication of this possibility. The role of the public would be diminished, not enhanced.

Moreover, countries like Germany and Israel have not been immune to the political disharmony that has raged across the western world. If proportional representation truly ‘boosted public engagement with politics…(accommodating) differences of interest and population’, we would expect to see there the continuing inexorable march of democratic liberalism. In contrast, they are just as riven by partisanship as the UK. There is nothing, in theory or in practice, that gives real credence to the potential of proportional representation ameliorating the current discord within our, or any other, liberal democracy.

‘We will not recognise the end of democracy when it comes.’ This was the concluding prophecy of Lord Sumption. That may be true, but we would do well to recognise that some steps can hasten its arrival. Democracy is more than the ‘will of the people’, and the solution to democratic despair is not necessarily more democracy. A system of proportional representation would do little other than to open the floodgates, with the pomp and circumstance of Westminster Palace just legitimising ever more radical opinions. Instead, we need to look to how to purify the water itself, which will require plumbing to greater depths than Lord Sumption has done here.