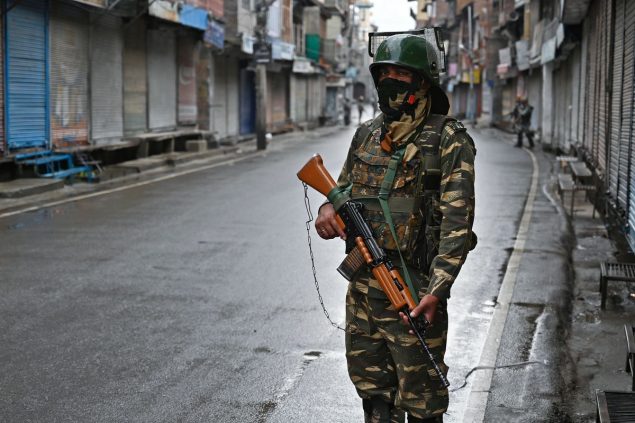 When India revoked Article 370 of its constitution, effectively ending the special status of Kashmir, Islamists in Turkey were outraged as they care deeply about the territory and Kashmir has a Muslim majority.

On Aug 5, India revoked Article 370 of its constitution, effectively ending the special status of Kashmir, a territory that borders with Pakistan and China. To guard against an insurgency backlash, the government flooded Kashmir – already one of the most militarized places in the world – with even more military forces, put a curfew in place, and cut off its communication with the outside world. By lining up the Hindu domination of India’s sole Muslim-majority region, it has also put in danger India’s secular character, which has been the keystone of maintaining harmony among the country’s diverse people.

This process was breathtaking to watch from Turkey. Kashmir has a Muslim majority and had a special status that granted it autonomy within India. Islamists in Turkey care deeply about the territory and were outraged. The rest of us were interested in the events not simply because of the suppression of millions of people, but because the dynamic of majoritarian politics was so chillingly familiar.

Winston Churchill scorned the idea of an India independent of Britain. “India is a geographical term. It is no more a united nation than the equator,” he said. There might have been a reason to doubt in 1931, we’ll grant him that. India is almost an entire subcontinent. It’s hard to imagine sometimes sitting in cozy little Anatolia, but India spans 3,287,263 square kilometers, with a population of more than 1,339 million. It has 29 states and 22 official languages. That makes it comparable to the European Union with a territory of 4,475,757 square kilometers and a population of 513 million. The EU has 28 constituent states and 24 languages. “Unity in diversity” has been a founding mantra of the Indian Union, while the EU’s has been “Veritate Concordia,” meaning “United in Diversity.”

I first heard the term “love jihad” a few years back when I was in India. The term is used to describe the efforts of Muslim men who try to marry (and thereby convert) Hindu women. I was perplexed. The argument was that this was a Muslim effort to break the dominance of the Hindu population. I was presented with no proof, nor do I think there would be any, but the gossip machine was hungry for this sort of thing, increasing tensions and leading to attacks against Muslims. The Hindu nationalist media pushed the story pretty hard in ways that should be familiar to any who’s seen a majority suppress and bludgeon a minority. The scary thing about India of course, was the titanic size of the country, and the numbers involved. India’s 172 million Muslims are barely 15 percent of the population, but they make up far more than twice of Turkey’s population of 83 million. We have significant problems regarding religious and ethnic minorities, but it’s safe to say that things like intermarriage have never been nearly as significant a problem as they are in India.

The revocation of Kashmir’s status will surely change the region’s demographics. The social video app TikTok apparently abounds with clips in which men claim that they’re going to “marry Kashmiri girls,” presumably whether they like it or not. Love Jihad in reverse, I sadly have to say. Why? The revoked article 370 had been preventing outsiders from buying property in Kashmir unless they were married to Kashmiris. It wasn’t preventing mixed marriages, but rather preventing the offspring of such marriages from owning land in Kashmir. Now that Article 370 is revoked, anyone can own land there. (I recommend “Teen video app TikTok is the latest battlefield in the Kashmir conflict” in the MIT Technology Review on this.)

Last May, Prime Minister Narendra Modi and his Hindu nationalist BJP won an absolute majority in the Indian parliament. New Delhi is moving away from decades-old coalition governments and horse-trading into nationalistic consolidation. As a Turk writing in the 17th year of the Justice and Development Party (AKP) rule, I can say that such a process generates a great deal of power, but is very hard on the political consciousness of a country.

Last week, in a rally for Independence Day, Modi outlined his road map towards “New India.” He said “the work that was not done in the last 70 years has been accomplished within 70 days after this new government came to power,” leading people to ask how much further he intends his national consolidation to go. Herein lies an important point for people to understand about new nationalism across the world: This is only the beginning. Huge majorities raptured by dreams of national glory have hijacked the institutions that have allowed people to live together peacefully. The methods of this transformation are very simple. Modi just unilaterally took Kashmir.

Turkey was one of the countries where national consolidation first started happening. When compared to India, Brazil, China and other countries however, it is a small country, and in comparison, Turkey’s consolidation process might turn out to be relatively soft. No matter the size of the country however, secularism is key. Secularism in this sense doesn’t just mean a separation of “church and state,” nor does it mean expunging religion from public life. Secularism in the 21st century requires an awareness that national myths are fictional narratives created by people, and that in order to succeed, these people need to keep their myths accessible to as many faiths as possible. We are all tempted by homogeneity, and yielding to that temptation is extremely dangerous. Turkey has been learning that lesson, albeit slowly. I can only hope that India will too.