Was Trump’s Syria strike legal? An expert weighs in 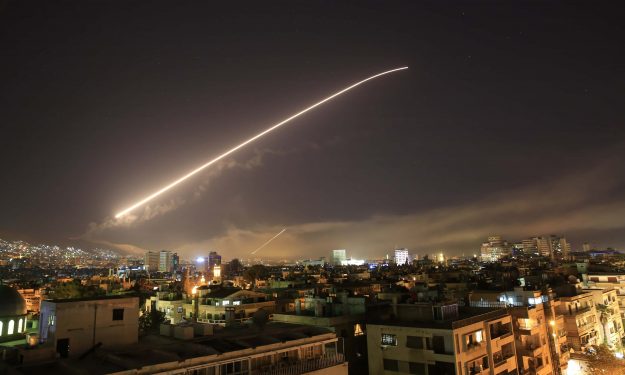 By Ariane de Vogue, 17 April 2018. Was the Syria military strike legal? A Q&A with CNN legal analyst and national security law professor Steve Vladeck about the legal issues surrounding President Donald Trump’s authorization of a strike against a Syrian government air base.

A: The Trump administration has suggested that they are, as an exercise of the President’s inherent power under Article II of the US Constitution. At least judged against the constitutional text, historical practice, and contemporary understanding, this argument is a stretch — but it’s going to take a bit of work to explain why.

Q: What does the Constitution say?

A: Neither the text of the Constitution nor historical precedent conclusively settle when the president needs Congress to approve the use of military force. The Constitution divides the war powers between Congress and the President, and leaves unresolved exactly when uses of military force do and do not require Congress’s sign-off. Article I of the Constitution gives Congress the powers to “declare war,” “raise and support armies,” “provide and maintain a navy,” and “make rules” to govern the military (and, perhaps most importantly, to fund all military operations), but Article II gives the President the “executive power,” and makes him “commander in chief” of the military, powers that virtually all presidents have interpreted to give them at least some room to use the military without express permission from Congress.

Q: What has happened in practice?

A: There are a number of examples of modern uses of US military force without express statutory authorization. President Harry S. Truman ordered US forces into combat in Korea; President Ronald Reagan ordered the use of military force in, among other places, Libya, Grenada and Lebanon; President George H.W. Bush directed an invasion of Panama to topple the government of Manual Noriega; and President Barack Obama used air strikes to support the ouster of Moammar Gadhafi in Libya. At the same time, we shouldn’t read too much into any one example; some of these were based on very different legal theories (for example, the Korean War was justified on the ground that it was as part of broader UN operations that Congress had implicitly authorized). And some were (and remain) very controversial, like Obama’s use of force in Libya.

Q: Didn’t Obama also use military force in Syria? Why is this different?

A: Obama used military force in Syria on various occasions, but against terrorist groups including ISIS, not the Assad regime. He justified those actions legally under the Authorization for the Use of Military Force (“AUMF”) that Congress passed after the September 11, 2001 terrorist attacks. That AUMF allows the President to act against those groups the President determined to be responsible for the attacks, and both the Obama and Trump administrations have interpreted that statute to include ISIS — and to use force under its auspices in both Iraq and Syria. That argument itself is controversial, but there’s just no argument that the 2001 AUMF authorizes force against the Assad regime.

Q: Has the Supreme Court settled the matter?

A: Not even a little. During the Civil War, the Supreme Court recognized that the President does have unilateral power to “repel sudden attacks,” what we generally refer to today as a “defensive war power.” But the court has otherwise bent over backward to avoid demarcating the lines between Congress and the president here — perhaps most famously during the Vietnam War, when it ducked dozens of cases trying to prompt a ruling on whether various US military operations in southeast Asia were lawful. Last night’s strikes did not involve Trump “repel(ling) sudden attacks,” so these precedents don’t help. And perhaps more importantly, the absence of meaningful judicial precedents means that debates over whether particular uses of force were or were not lawful are left to scholars and the political branches.

Q: What do legal scholars say?

A: Although the Supreme Court hasn’t settled the matter, there’s actually widespread consensus among scholars from across the ideological spectrum about at least some basic principles, including that the President does not need Congress’s specific approval before using force in (1) self-defense; (2) non-combat roles; or (3) situations in which Congress has provided more general advance authorization, such as in support of UN-authorized operations.

Q: Does last night’s strike fall into any of those categories?

A: It does not appear to — and the White House itself hasn’t so far argued otherwise. It might be different if there was a broader international consensus — and the strikes were in support of multilateral operations. But that’s not true here. Instead, what little the White House has said so far on the legal authority seems to imply that the strike’s legality comes entirely from it being “in the national interest” to stop the use and proliferation of chemical weapons, presumably for both regional security and humanitarian reasons.

Q: Why isn’t that enough for a legal justification to use force?

A: It’s a compelling policy argument, as most Americans would agree that chemical weapons raise both security and humanitarian concerns. But unilateral presidential war-making requires more than just good policy arguments; it requires legal underpinning. If there really is sufficient consensus on the wisdom of such force as a policy matter, the President can ask Congress to provide specific authorization.

Q: Why does the absence of precedent itself suggest that last night’s strike might be illegal?

A: Congress hasn’t expressly forbidden unilateral uses of force outside of the three contexts mentioned above. But it has, through a 1973 statute known as the War Powers Resolution, imposed a series of procedural requirements to ensure that presidents keep Congress in the loop, and it has imposed a 60-day limit on how long presidents can use such force without more express statutory approval. So it’s possible that, if last night’s strike was truly a one-off episode, it would be problematic as a matter of precedent, but not in blatant conflict with the War Powers Resolution. That’s why a lot depends on the next steps.

A: It may be enough politically, but the Constitution requires more than just informal congressional notification and acquiescence; it requires that the use of force be justified either by the president’s inherent authority (which, again, usually extends only to the specific categories identified above), or by a specific statute. During the Korean War, the Supreme Court specifically rejected an argument that Congress had authorized Truman’s seizure of striking US steel mills simply by being notified and not objecting. So too, here.

Q: So what happens now?

A: Under the War Powers Resolution, the President is supposed to report to Congress within 48 hours on “(A) the circumstances necessitating the introduction of United States Armed Forces; (B) the constitutional and legislative authority under which such introduction took place; and (C) the estimated scope and duration of the hostilities or involvement.” If Trump complies with that requirement, we should know a lot more by the end of the weekend. Then, it will be up to Congress whether to pursue some kind of more express authorization, or to push back against the use of force, or, as is most likely, to do nothing. After 60 days, Congress doing nothing should have legal consequences if we’re still using force against the Bashar al-Assad regime. But if we’re not, then this matter may fade into the background without domestic legal consequences.

Q: So the strike was legal?

A: Just because it may produce no domestic consequences doesn’t mean it was legal. And, perhaps most importantly, it will now likely be very difficult as both a practical and legal matter for Trump to use additional military force against the Assad regime without more specific approval from Congress. Until and unless that happens, though, there likely will be no formal resolution of the legal question — and, thus, one more equivocal precedent in the separation of war powers.