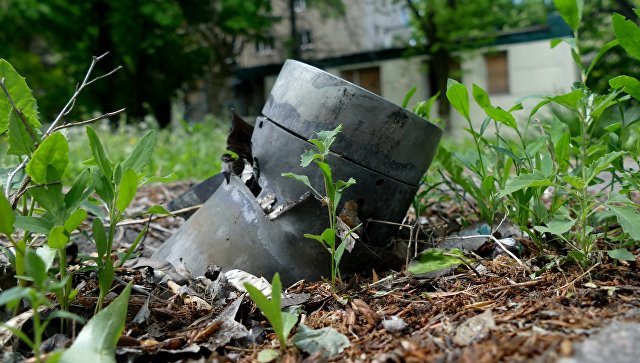 As military activity in East Ukraine grows, along with the prospect that the US will supply Ukraine’s army with heavy lethal weapons, the steady stream of anti-Russian propaganda grows in proportion. The public is not, however being told that the source of the provocations is the continual violation of the Minsk accord by the Ukrainian army. Nor is it being informed of a yet more alarming development: what appears to be deliberate attempts to involve NATO directly

Over the past two days, a number of important developments have taken place in Donbass and Ukraine.

Firstly, on May 17th, a group of NATO troops from the US and Canada stepped into a minefield near Avdeevka, a move which ended in explosions and, according to DPR reports, deaths and woundings. This news was published by Russia’s leading news agencies, which is in itself an important development, since earlier such resources had been very cautious in speaking of NATO involvement in the war in Donbass. Most significantly of all, Rossiiskaiia Gazeta, theofficial organ of the Government of the Russian Federation, shared the news.

To briefly recap, Avdeekva is a small satellite town of Donetsk. Since the very beginning of the conflict, the town has been occupied by the Ukrainian Armed Forces. Avdeekva is known as an industrial giant, whose coke-chemical plant has worked throughout all four years of the war and been a major source of contention between oligarchs. The overwhelming majority of Avdeevka’s residents support the DPR, and one of Donetsk’s lines of defense runs right in front of the city. It is in this very city that Ukrainian troops and OSCE observers have been spotted collaborating during military operations.

Allow me to draw the reader’s attention to the fact that the DPR’s military intelligence reported at least two days before the minefield incident that the Ukrainian Armed Forces’ command is preparing a provocation involving NATO troops. It seems that they were deliberately sent into the minefield to blame Western troop deaths on DPR military sabotage. Such information was shared with journalists on May 15th by the speaker of the Donetsk People’s Republic’s army, Eduard Basurin.

But this story has another side. NATO troops, who are officially not supposed to be in Donbass, are undeniably, directly involved in the armed conflict. The US and EU’s constant accusations that Moscow is militarily and technologically aiding the Donbass Republics can now be rebutted by Russia’s foreign ministry. Moscow could now present evidence that the US and NATO are directly participating in the war.

The next piece of news is that also near Avdeevka, on May 17th, the commander of the DPR’s Pyatnashka international brigade, Oleg Mamiev, was killed. The backbone of Pyatnashka was made up of 15 fighters from Abkhazia, and the name “Interbrigada” was meant as a direct allusion to the international volunteer brigades from the Spanish Civil War. The unit was subsequently joined by many volunteers from North and South Ossetia, like Mamiev himself, who proved to be one of the most famous and authoritative Donbass commanders, a person who is spoken of with only the utmost respect. Mamiev was killed in the trenches alongside his soldiers.

In addition to these incidents, a number of events have taken place which would be difficult to fit into one article, but their significance can be expressed with one short word: war.

Ukraine is continuing to accumulate manpower and military vehicles and bring ammunitions up to the frontline. Kiev has essentially discarded its pretending to comply with the Minsk Agreements, and Avdeevka, Gorlovka, and the Svetlodarsk arch (near Debaltsevo) have been particularly “hot” as of late. Overall, things have been “hotter” in the DPR than in the LPR. Hence the differing assessments of the prospects of war from the two republics which I have shared in a number of articles for Fort Russ News.

Some of my friends in Donbass believe that the Americans and, as follows, the Ukrainians expect to play a long-term game. In other words, they want to wage a war of attrition. There is merit to this theory, but I nonetheless do not believe that the Ukrainians are capable of maintaining the status-quo for any significant period of time. Their resources and especially their patience are severely limited. Therefore, there are evermore grounds to believe that the war in Donbass will “wake up” again sooner or later.