The numbers on the map indicate the electoral district identifying number. Turnout of registered voters is listed by shade of color in the side bar. Kyiv is shown in the upper center of map at app. 60 per cent.

In 2012, 20.8 million people voted in the Rada election, for a turnout of 58 per cent. In the Oct 26, 2014 election, the preliminary count of turnout is 51 per cent. It is not reported how many people of adult age were registered to vote. 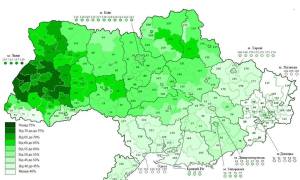