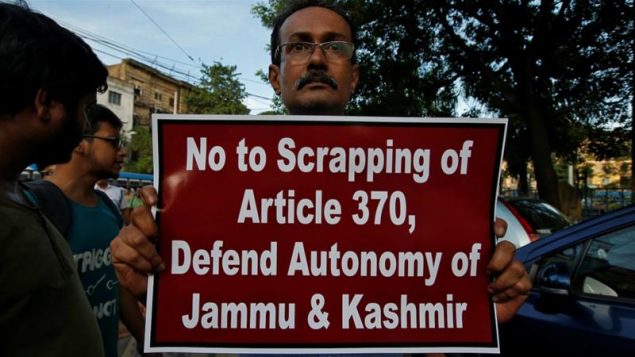 A man displays a placard during a protest against the scrapping of special constitutional status for Kashmir, in Kolkata, India, August 6, 2019 [Rupak De Chowdhuri/Reuters]

On this episode of Going Underground, Afshin Rattansi speaks with Indian author and Director of the Tricontinental Institute for Social Research Vijay Prashad on India’s revocation of Article 370 and the 35th Amendment for Jammu and Kashmir. He discusses that this is a sign that Indian federalism is under threat and that the BJP wants an authoritarian, centralised India, why the move was anti-democratic and will alienate Kashmiris, why viewing Kashmir through the lens of terrorism is narrow, his belief that a deal was done between India and China to allow India to revoke Article 370 and for China to keep Aksai Chin and also the imprisonment of Brazil’s Lula Da Silva.