Victor Shapinov interview: ‘Donbass uprising is based in the ‘Soviet’ world’

Interview by Alexander Chalenko of Ukraina.ru, July 21, 2015. Translation to English by Greg Butterfield of Red Star Over Donbass.

Victor Shapinov was an active participant in the ‘Russian Spring’ in Kharkov and Odessa. He is the coordinator of the Borotba (Struggle) political movement in Ukraine.

Alexander Chalenko: So Victor, you are here in Donetsk and Lugansk, in conversation with Russian volunteers who came to fight in the Donbass. Have you raised this topic with them: to what degree have their preconceptions of the Russian people in Donetsk, Lugansk, Alchevsk and other towns in the region coincided with reality? In this respect, what have they done to open themselves? 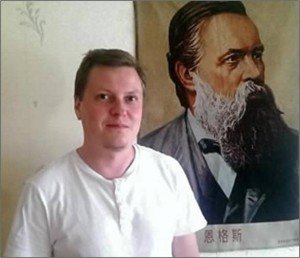 Victor Shapinov: Yes, I’ve raised it. Even laughing together, Russian volunteers jokingly say: “We thought it was the Russian people whom the Ukrainians were oppressing, and here in the Donbass it is native Ukrainians.” Indeed, the average Ukrainian is more like a resident of Donbass than, say, a Galician.

Many came here to defend the “Russian world,” and ended up in the midst of a civil war in Ukraine, where among the militias [self-defense forces] there may be people from Ivano-Frankivsk (I’ve met some). Even among the Russian-speaking majority, many are poorly understood.

And you know, the most bloodthirsty enemies of the DNR and the LC [Donetsk and Lugansk People’s Republics] in Ukraine are emigrants from the Donbass, who supported the Maidan in Kiev. It is them, first of all, who call for killing their fellow countrymen, whom they view as “cattle” and “sheep”. So this is a civil war that has a socio-political nature, and the national and language questions are actually not so important.

AC: You yourself are a citizen of Russia. You’ve had the experience of living in Moscow. For a long time, you lived in Kiev. Then after Euromaidan, you lived in Kharkov and Odessa. Then in Crimea. Now in war-ridden Donbass. What are the differences between Moscow, Kiev, Kharkov, Odessa, Crimea and the Donbass? Can we say that the same Russian people live in all these cities?

VS: If one people lives in all of these cities, that people is not Russian, but Soviet. The head of the DNR, Alexander Zakharchenko, has spoken straightforwardly on television of the “Soviet world,” not “Russian”. Yes, this “Soviet world” was formed largely on the basis of Russian culture and the Russian language as the language of international communication, on the traditions of classical Russian literature and the Russian liberation movement — from the Decembrists to the Narodniks and the Bolsheviks. But not only that. It combined the best, progressive traditions of all the peoples of the USSR.

It’s like Soviet cuisine, created under the leadership of Stalin’s Commissar Anastas Mikoyan, which included Ukrainian borscht and Uzbek pilaf, Caucasion shish kebab and Russian soup. The Soviet Union had a great mission of modernization. Incorporating the katsap with a balalaika and a shirt and crest with embroidery and trousers, they created the Soviet Ukrainian and Soviet Russian.

Now we see [in Ukraine] they are trying to bring back this national wildness and instill chauvinism and feudalist traditions. In Ukraine, this barbarism has taken on a truly national scope, and Donbass rebelled against that in many respects. In Russia it is easier, but even there, a lot of forces dream of a [Russian] Orthodox Taliban. Among those people in Russia who rightly hate Ukrainian fascism, there sometimes develops a hatred for everything Ukrainian; they deny the existence of the Ukrainian language, start to chatter that the Austrian General Staff invented the Ukrainians as a nation. These people do not realize that they are acting like the Ukro-fascists they hate. These people are absolutely wrong.

In its time, Germany was struck by a terrible social disease, Nazism, and a large part of the German people supported Hitler. The Germans killed and robbed the peoples of Eastern Europe. But when the Red Army drove the new barbarians back to the borders of the Reich, many said that it was necessary to destroy Germany as a nation, to kill the Germans on the grounds of nationality.

In 1944, Ilya Ehrenburg, the famous Soviet writer, wrote an article in which he called for “the complete destruction of Germany.” Stalin replied with what became a well-known saying: “Hitlers come and go, but the German people and the German nation remains.” Likewise, we — the opponents of the Kiev junta — should say, “Poroshenko and Yarosh come and go, but the Ukrainian people remain.”

AC: Can you name the differences between Ukrainians and Russians?

VS: It’s a different but very similar people. But even the Ukrainian version of the Russian language is somewhat different from the Russian version. Although I have not delved much into this topic, you can reach conclusions without appeals to measuring skulls, and “blood and soil”. The development of nations is a long historical period, but it is coming to an end. Humanity will sooner or later make national divisions obsolete. The Soviet Union made important steps in this direction, forming the “Soviet people”. I think the future is this, rather than finding and cultivating national differences.

VS: The difference is that you are Ukrainian, and I am Russian. Once again, I’m not going to “measure skulls”, but if I met you on the streets of Moscow and did not know you personally, I would have just thought you were Ukrainian. I think that, in appearance, character and temperament, it is hard to imagine a more typical Ukrainian than you.

VS: Having lived for 10 years in Ukraine, I speak some mixture of these. I am not a linguist, so it is difficult for me to speak on this topic, but I think that all who have lived in both Russia and Ukraine feel the difference. I understand that you want to prove that Ukrainians do not exist, but it is not true. Among Belarusians, 90 per cent speak Russian and their version is closer to the Russian than the Ukrainian. However, for some reason, no one denies the existence of the Belarusian people, while Ukrainians are denied.

AC: The Russian-speaker, with little understanding of the Ukrainian language, and the Right Sector, are all, in your opinion, Ukrainians?

VS: Among the Right Sector there are Russian-speaking Ukrainians and Russians. Again, I do not think that it is a primarily national confrontation in Ukraine. Whoever thinks so, should consider all Ukrainians Right Sector and all the Russians militia. In fact, the civil war in Ukraine has divided all the people living in the country.

AC: You are a Marxist and a communist. You believe in class struggle. But the uprising in Novorossiya still goes primarily under Russian slogans, as well as under the Soviet, which, not in words but in actual fact, is mostly Russian. So the question is: why do you leftists, in this case, support the “Russian Sprin” and don’t consider it petty-bourgeois or bourgeois Russian nationalism? 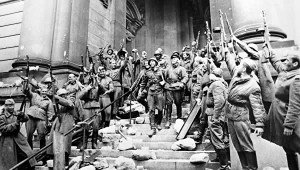 Soviet soldiers during WW2 of Russian, Ukrainian and many other nationalities

VS: Marxists and communists have always supported the struggle against national oppression, so we are on the side of the Donbass. But there is the struggle against national oppression, and there is nationalism as the superiority of one nation and the oppression of others. Here we are also against Russian nationalism, and if someone in the Donbas wants to oppress the Ukrainians, Jews, Tatars or some other nation, for us they would be the same enemy as the Ukrainian fascists, trying to ban Russian language and Russian culture.

But I have not seen that in Donbass. I have seen among the militia Tatars, Azeris, I’ve even met a militiaman with a Pashtun. They are fighting for the region while remaining internationalists, imbued with the spirit of friendship of peoples, which has always been the case in the Donbass.

And those in Donetsk who consider themselves Russian nationalists are more fighters against national oppression, something like the Irish Republicans or national liberation movements in the Third World. Most imported Russian fascists are now fighting on the side of Kiev, especially since the DNR finally kicked out the fascist Petersburg Milchakova gang, which was a disgrace to the whole country and militia.

I do not think that Soviet slogans bring out the Russian nationalists. Soviet carries a strong connotation of social liberation, of anti-capitalism. This connotation was very strong in the Donbass uprising from the beginning. In the words of the late Alexei Mozgovoi, “The main enemy is the oligarchs and bureaucrats.” This is a testament to the legendary brigade commander.

The very name “people’s republic” comes from the “Soviet world”, where there was the socialist Polish People’s Republic, the People’s Republic of China, etc. They revolted not only against Kiev but against their own oligarchs. Against the “Donetsk oligarchy”: against Taruta, against Akhmetov, who tried to suffocate the revolt “in an embrace” and then “negotiate” the surrender of Donetsk to Kiev.

We, the communist left, support this original focus of the uprising, we don’t want the name of the “people’s republics” to remain just words. People will not fight for the restoration of the Romanov empire, these shadows of the past “don’t stick”. But to bring back all the gains that have been taken away from the people since 1991 – they will fight.

AC: But you leftists, what do you think about “spin,” [looting] “basements” [detention by militia] and such practices as “shooting in the leg”, practices which existed among the “people’s commanders” behind the backs of the authorities of the DNR and LC?

VS: Regarding “spin”, there is looting, for which it is necessary to shoot. Then there is confiscation of the assets of fugitives on the side of Kiev among the bourgeoisie and officials. These are different things. “Basements” arose when the government and the legal system collapsed. Each commander became the court and prosecutor, policeman and jailer. Of course, such a system, spontaneously born from the revolution, could not be without defects and excesses. And among the “authorities of the DNR and LC”, who are themselves from among the national commanders, such excesses are not fewer than those of other militias. As far as I know, these phenomena reflect the struggle.

AC: But in the biography of Alexei Borisovich Mozgovoi were such practices as basements and spin.

VS: Everyone used the basement. How else to punish a bully or a fighter who drank on duty? They were put for a certain period of time “in the basement”, where they engaged in socially useful work, such as digging trenches or scavenging. That certainly was the case with Mozgovoi’s basement.

Now, once a legal system is established, the need for “basements” disappears. Alexei Borisovich Mozgovoi, and this is confirmed by my colleagues in the Ghost Brigade, was a political and honest man, with no spin behind him.

AC: What do you think the people in Donbass want: incorporating the DNR and LC into Russia, or separate socialist republics?

VS: It is difficult to say. But I think that the question is not so urgent. It became clear a year ago that nobody in Russia was going to integrate the DNR and LC into its structure. To build socialism in such a small area with an export-dependent economy is almost impossible.

I believe that until the overthrow of the Kiev regime, there will be independent states with some elements of the welfare state–a powerful public sector and nationalization of the banks. This is the most that can be expected. But when greater Novorossiya or the whole of Ukraine is liberated, then we can think about changing the capitalist model to something less cannibalistic.