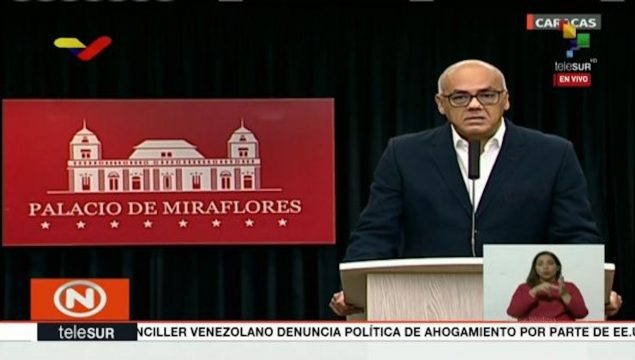 How can a human being plan on murdering another person with so much malice?”

We have more than 59 hours of videos from more than 7 meetings by the terrorists” said Rodriguez, who then proceeded to play leaked recordings of phone calls and meetings between opposition figures in which they discussed the logistics of carrying new violent attacks, and their liaisons with foreign groups.

One revelation was that former military figures discussed the need to assassinate President Nicolas Maduro, along with his wife Cilia Flores and President of the National Constituent Assembly Diosdado Cabello, “How can a human being plan on murdering another person with so much malice?” Said Rodriguez in response.

#LIVE | Venezuela's @jorgerpsuv plays audio recordings of terrorist plans to assassinate not just President Maduro, but also his wife. The government announce that they have more than 59 hours of video from 7 opposition meetings discussing terrorist activities. pic.twitter.com/DNv0i9pIsA

Another detail revealed was the high level of cooperation between coup plotters and foreign armed groups, namely from Panama and Israel. One former army general, known as “Simón” is said to be the go-between for the Israelis. In one call the Israelis cooperating with them were referred to as “those of the holy land”.

#LIVE | @jorgerpsuv says the government has identified the military figure, known as "Simón" who coordinated with Israeli nationals prior to the April 30th coup. pic.twitter.com/ClS0J7kMRs

As Rodriguez concluded the press conference he listed those who have been detained for their involvement in the coup and published the identities of those who are still in connection to it. The minister said that one of them, José Gregorio Valladares, was known as a torturer and drug trafficker during the neoliberal period, he also asked the public for information on the whereabouts of Ilich Sanchez Farias, a senior military figure who is wanted for involvement in the April 30th coup, and was recorded calling for the murder of Cuban doctors in Venezuela.

Thursday’s press conference was a follow up to one that took place on Wednesday that exposed the deep divisions among the opposition during the most recent coup attempt. One revelation was that a faction of military officers was secretly plotting to declare former general Baduel rather than Juan Guaido as the self-declared ‘President’ were the coup to have been successful.

Also on Thursday, Attorney General Tareck William Saab announced that the government is opening a formal investigation into those they believe to be behind the new coup attempt that has been foiled following the emergence of the new evidence. “We inform that the Public Prosecutor’s Office has opened a criminal investigation against civilians and retired military personnel who were implicated in a coup attempt planned for June 23 and 24. It is a subversive group led by the opposition deputy Juan Guaidó” announced Venezuela’s Attorney General on Thursday.

The same right-wing would be trying to sabotage Guaido planning to carry out a coup within the opposition.