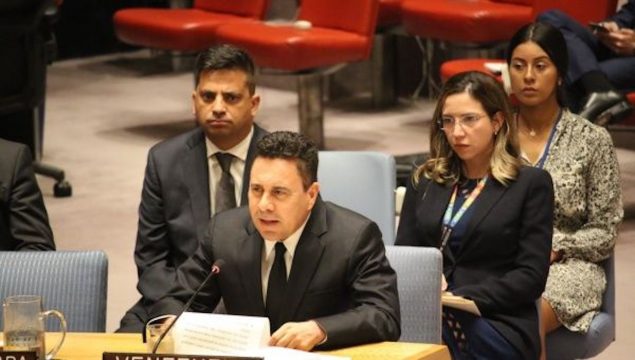 According to Venezuelan ambassador to the UN, Samuel Moncada, in 2019 the U.S. military has carried out more than 55 incursions with spy planes in the region.

President, Nicolas Maduro, rejected the threat of U.S. president, Donald Trump, to impose a naval blockade or a so-called “quarantine” against Venezuela Friday, meaning the U.S. would try to stop ships from going in or out Venezuelan waters.

“Venezuela as a whole, in a civil society and military forces union, repudiates and rejects the declarations of Donald Trump of an alleged quarantine, of an alleged naval blockade. To the imperial imperialism I say that they won’t be able to fulfil their plans with Venezuela,” president Maduro said during a speech after an activity of supervision of the Venezuelan national shipping industry.

“The seas of Venezuela will be free, sovereign and independent (…) and we will navigate them as we decide,” President Maduro emphasized.

To this point, he noted that the Bolivarian Government was preparing a formal complaint to the Security Council of the United Nations Organization (UN) the new threat of the United States, which he said, will go against the whole Venezuelan population.

On Thursday, when asked by a reporter whether he was considering such a measure, Trump said, “Yes, I am.” He gave no details.

On Friday, a senior U.S. official said Trump’s word on the issue should be taken “very seriously” but that the administration did not want to give away “the element of surprise.”

Hours after President Maduro statements on Friday, Venezuela’s ambassador to the United Nations, Samuel Moncada, denounced the economic blockade and the “theft” carried out “on a worldwide scale” by Washington, saying it was consistent with a crime against humanity.

“We reject the horrific perspective of perpetual war and demand the implementation of the UN Chart. We ask Trump to stop the war,” said the diplomat one day after Trump told reporters his administration was considering a naval blockade on Venezuela.

“Today we came to denounce the United States for generating famine in our country, imposing collective punishment through economic terrorism by illegally appropriating mining and monetary funds.”