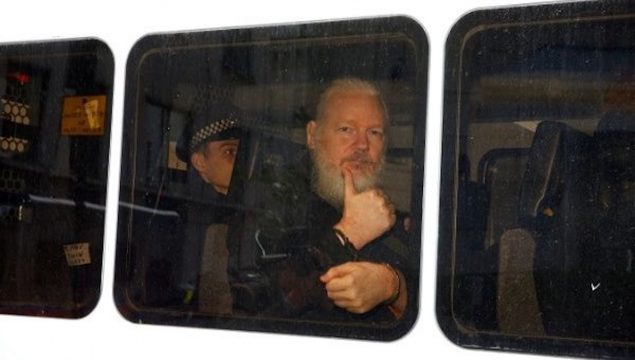 WikiLeaks founder Julian Assange is seen in a police van after was arrested by British police outside the Ecuadorian embassy in London, Britain April 11, 2019. | Photo: Reuters

Following the arrest of Julian Assange at the Ecuadorian Embassy in London, Venezuelan Foreign Minister Jorge Arreaza published a statement on Twitter stating that President Maduro, on behalf of the government and the people, “expresses his most categorical rejection of the atrocious decision that deprived Australian-Ecuadorean Julian Assange of the right to diplomatic asylum.”

The Venezuelan government of President Nicolas Maduro rejected Thursday the decision to withdraw asylum for Australian journalist Julian Assange, founder of WikiLeaks, as well as his subsequent arrest at the Ecuadorean Embassy in the United Kingdom.

Venezuelan Foreign Minister Jorge Arreaza published a statement on Twitterstating that President Maduro, on behalf of the government and the people, “expresses his most categorical rejection of the atrocious decision that deprived Australian-Ecuadorean Julian Assange of the right to diplomatic asylum.”

Venezuela denounced that Assange have been politically persecuted by the government of the United States, after the WikiLeaks founder revealed “the darkest and most criminal face of the ‘wars of regime change’ that the American empire executes.”

U.S. prosecutors filed conspiracy charges against Assange for allegedly trying to access and reveal information from U.S. government computers containing over 70,000 of classified information in 2010, along with former military intelligence analyst Chelsea Manning.

In addition, Arreaza recognizes that Assange is an activist for the freedom of information and expression and said that what happened Thursday was “a shameful affront to international law, to his human rights and puts his life in imminent danger.”

“Venezuela joins the millions of voices and consciences in the world that demand from the British government respect for the integrity and human rights of Julian Assange,” Arreaza said.

The Venezuelan official’s statement insists that the journalist should not be handed over to the U.S., “where his life is in danger due to a rigged judicial process, in which the charges he is accused of have not even been revealed.”

The Venezuelan government exhorted that Assange should be released immediately and that his protection and due respect to life and integrity be provided.

The United Nations human rights office urged judicial authorities Friday to ensure that Wikileaks founder Julian Assange, currently in British custody and the subject of an extradition request from United States, gets a fair trial.

Assange was arrested Thursday in London when Ecuador revoked his diplomatic asylum after seven years of being holed up its British embassy.

“We expect all the relevant authorities to ensure Mr Assange’s right to a fair trial is upheld by authorities, including in any extradition proceedings that may take place,” U.N. human rights spokeswoman Ravina Shamdasani told a Geneva news briefing.

Ecuador’s Minister of the Interior Maria Paula Romo said Thursday that a person linked to the WikiLeaks organization has been detained in Ecuador. Ola Bini, an alleged Assange collaborator, was apparently attempting to leave Ecuador for Japan.

It is been almost 12 hours since Privacy & Open Source advocate @olabini was arrested at the airport leaving on a long planned trip to Japan.  He has been held in the airport, his attorneys have been lied to & threatened.  @Lenin this is WRONG! #FreeOlaBini pic.twitter.com/YoDcQMheFA

Romo confirmed that “a person close to WikiLeaks, who had been residing in Ecuador, has been arrested this afternoon, when they were preparing to travel to Japan,” the Interior Ministry said on her official Twitter account.

In a radio interview, Romo said that “the detention is for investigative purposes” and preferred not to go into detail as the investigation is open.