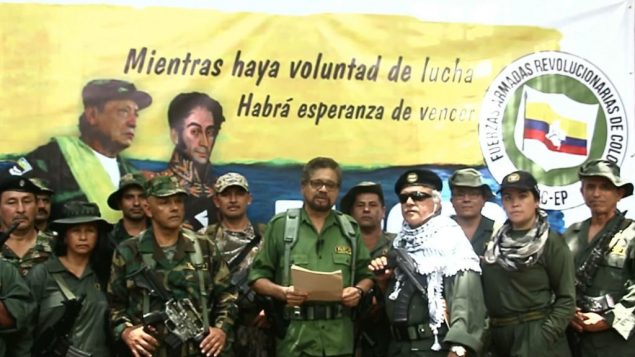 Colombian senators and ex-peace negotiators Ivan Marquez and Jesus Santrich announced the return to arms of a FARC-EP fraction in the Colombian jungle. (Jacobo Alape / Youtube)

The Venezuelan government has blamed Colombian President Ivan Duque’s policies for the reignition of the armed conflict in the country.

Caracas also rejected Bogota’s accusations that it had played a role in the breakdown of the 2016 peace agreements between the Colombian government and the Revolutionary Armed Forces of Colombia – People’s Army (FARC-EP).

“It is incredible that Ivan Duque, with absolute impertinence (…) looks to displace his exclusive responsibility in the planned dismantling of the peace process (…) to third party countries” the Venezuelan Foreign Ministry stated in a communiqué on Friday.

The statement reiterated Caracas’ commitment to “real peace” in Colombia, while pointing the finger at the Colombian government for causing the breakdown through “calculated decisions” and turning a blind eye to human rights violations, including “hundreds of targeted assassinations.”

After a fraction of the FARC-EP announced their return to armed struggle last Thursday, Duque accused the Maduro government of offering “support” and “refuge” to the rebels, as well as fostering a return to armed conflict in the neighbouring country.

FARC commanders Ivan Marquez, Jesus Santrich and “El Paisa” announced their decision in a video filmed from the Colombian jungle town of Inirida, justifying their decision by claiming that more than 500 social leaders and 150 disarmed ex-guerrilla fighters have been murdered since the 2016 peace accords, while also pointing towards other parts of the agreement which have not been upheld by the Colombian government.

Earlier this year Maduro caused a stir by saying former peace negotiators Santrich and Marquez would be “welcome” in Venezuela in their condition as “peace leaders.” Both men are currently being sought by Colombian authorities, with US $860,000 being offered for their capture. Despite Maduro’s words, neither man travelled to Caracas for the event.

Accusations of ties between Caracas and the Marxist FARC-EP guerrilla organisation, which Washington defines as terrorist, have been recurring during both the Maduro and Chavez governments, despite repeated denials and little evidence produced to back the claims.

Following the rebels’ announcement, Colombian General Nicacio Martinez informed that a “special group” had been established to hunt for the FARC-EP guerrillas, with seven arrests made only kilometres from the Venezuelan border in the Norte de Santander region Saturday.

In response, Venezuela’s Defence Minister Vladimir Padrino Lopez issued a warning to his Colombian counterparts to “not seek excuses or pretexts with false flags to violate [Venezuelan] sovereignty,” recalling the 2008 Angostura Bombing in which Colombian forces crossed into Ecuador to bomb FARC positions.

“We will safeguard our sovereignty and [should it be breached] we will respond militarily, and we will do so in an overwhelming fashion in legitimate defence,” Padrino warned on Twitter.

Guaido also took the opportunity to slam the Maduro government, which he claims is “usurping” its functions.

“The legitimate [Guaido] government of Venezuela repudiates the return to arms announced yesterday by the dissidence of the FARC under the auspices of the usurper [Maduro] regime,” a press statement from Guaido’s office reads, while also accusing the government of providing “sanctuary” for armed groups and “violating international law.”

Guaido’s comments came in the wake of a series of appointments of “presidential commissioners” on Wednesday by the National Assembly President.

Right-wing opposition leader Julio Borges was tapped as presidential commissioner for foreign affairs and will have the specific task of “increasing international diplomatic and financial pressure on the dictator.” Borges has previously been vocal in his calls for increased sanctions against Venezuela.

Equally, far-right leader Leopoldo Lopez was appointed “presidential commissioner for the government centre,” with the task of coordinating the other “commissioners.” Both Lopez and Borges are fleeing charges from the Venezuelan justice system, with Borges based in Colombia and Lopez seeking refuge in the Spanish Embassy in Caracas.