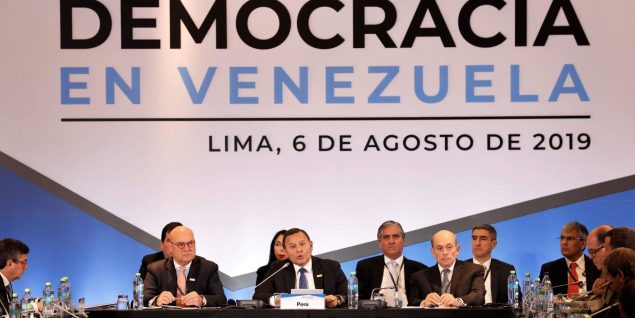 This past week’s meeting of the U.S.-and-Canada-created anti-Venezuela Lima Group of nations failed to achieve the U.S. regime’s intention of organizing a coalition of its members to participate in a U.S.-led invasion to overthrow Venezuela’s Government and install Trump’s choice, the self-styled ‘interim President’ of Venezuela, Juan Guaido, to rule there. Although 100 nations had been invited, only 60 attended, and the U.S. regime wasn’t able to obtain even one ally for an invasion.

This past week’s meeting of the U.S.-and-Canada-created anti-Venezuela Lima Group of nations failed to achieve the U.S. regime’s intention of organizing a coalition of its members to participate in a U.S.-led invasion to overthrow Venezuela’s Government and install Trump’s choice, the self-styled ‘interim President’ of Venezuela, Juan Guaido, to rule there. Although 100 nations had been invited, only 60 attended, and the U.S. regime wasn’t able to obtain even one ally for an invasion.

John Bolton (U.S. National Security Advisor) and Wilbur Ross (U.S. Secretary of ‘Commerce’ — mainly U.S. oil companies) represented U.S. President Trump at the meeting, which started on August 5th. The meeting ended with no official announcement. It was a humiliating defeat for the U.S. regime.

Below is a report about this meeting, by Agence France-Presse, a typical U.S.-allied ‘news’-medium. The italicized additions in brackets in and near the article’s end are essential historical context; it’s taken from Wikipedia’s article “International sanctions during the Venezuelan crisis”, and thus also isn’t from me.

This way, the reader will be able to see what the ‘news’-report here leaves out, which is essential background in order for readers to know the reality that stands behind this particular ‘news’ report. The minor typos in the original report are also left unchanged; the entire article is unchanged, except that I boldface the passages toward the end, which passages are subsequently contextualized immediately below them.

Afterward, I shall add my own comments, in order to provide a fuller context:

US warns off Venezuela’s supporters as Lima meeting opens

AFP, Lima (AFP): Washington warned third parties on Tuesday to avoid doing business with the Venezuelan regime of Nicolas Maduro, as delegates from some 60 countries met in Lima to discuss ways of ending the crisis in South American nation.

The warning came one day after President Donald Trump ordered a freeze on all Venezuelan government assets in the United States and barred transactions with its authorities.
“We are sending a signal to third parties that want to do business with the Maduro regime: proceed with extreme caution,” said Trump’s National Security Advisor John Bolton, speaking in Lima.

“There is no need to risk your business interests with the United States for the purposes of profiting from a corrupt and dying regime.”
The Trump administration is determined to force Maduro from power and support opposition leader Juan Guaido’s plans to form a transitional government and set up new elections.

The sanctions drew an angry response from Caracas, which denounced the US move as “another serious aggression by the Trump administration through arbitrary economic terrorism against the Venezuelan people.”

Crisis-wracked Venezuela has been mired in a political impasse since January when Guaido, speaker of the Natinal Assembly, proclaimed himself acting president, quickly receiving the support of more than 50 countries.

Tuesday’s meeting was called by the Lima Group, which includes a dozen Latin American countries and Canada, most of which support Guaido.
The Lima meeting comes as representatives of Maduro and Guaido are involved in “continuous” negotiations mediated by Norway.

The first round of talks were in Oslo in May, and three further rounds have taken place in Barbados.

Caracas claims the US sanctions show that Washington and its allies are “committed to the failure of the political dialogue” because “they fear the results and benefits.”

Bolton, who is in the US delegation alongside Commerce Secretary Wilbur Ross, said Maduro was “not serious” about talks.
He said Trump’s move “authorizes the US government to identify, target and impose sanctions on any persons who continue to provide support” Maduro’s “illegitimate regime.”

He said it would “deny Maduro access to the global financial system and to further isolate him internationally.”

Venezuela’s opposition considers Maduro a usurper over his re-election last year in a poll widely viewed as rigged.

They want him to stand down so new elections can be held — but Maduro, with support from the country’s powerful military, refuses to go.

Maduro says the talks must lead to “democratic coexistence” and an end to what he describes as an attempted US-orchestrated “coup.”

But on Tuesday the White House was emphatic: the “dictatorship must end for Venezuela to have a stable, democratic, and prosperous future.” The United States would “use every appropriate tool to end Maduro’s hold on Venezuela,” White House Press Secretary Stephanie Grisham said in a statement.

Oil-rich but cash-poor Venezuela has been in a deep recession for five years.

President Barack Obama signed the Venezuela Defense of Human Rights and Civil Society Act of 2014, a U.S. Act imposing sanctions on Venezuelan individuals held responsible by the United States for human rights violations during the 2014 Venezuelan protests, in December of that year.[13][14] It “requires the President to impose sanctions” on those “responsible for significant acts of violence or serious human rights abuses associated with February 2014 protests or, more broadly, against anyone who has directed or ordered the arrest or prosecution of a person primarily because of the person’s legitimate exercise of freedom of expression or assembly”.[8]

Food and medicine shortages are routine, and public services are progressively failing.

As the humanitarian crisis deepened and expanded, the Trump administration levied more serious economic sanctions against Venezuela on 28 January [2019], and “Maduro accused the US of plunging Venezuelan citizens further into economic crisis.”[3] Rafael Uzcátegui, director of PROVEA, added that “sanctions against PDVSA are likely to yield stronger and more direct economic consequences, and that “[w]e should remember that 70 to 80 percent of Venezuela’s food is imported, and there’s barely any medicine production in the country.”[3]

The U.S. regime’s sanctions against Venezuelans were aimed at producing such distress amongst the population so as to cause them not to vote for Maduro. It didn’t work. The sanctions had the intended effect of distressing Venezuelans, but this deprivation drove so many of the most anti-Maduro Venezuelans to leave the country so that the sanctions failed to force the expected “regime change.”

It drove too many of his enemies out. The U.S. regime is therefore trying even-stronger measures to grab the country. Trump is dictating to Venezuela that “the dictatorship must end.” He has even chosen the person, Guaido, who is to replace the current nationally elected President, whom the U.S. regime has long been trying to oust. Guaido has never even been a candidate in any national Venezuelan election, but he was trained in the U.S., and has always cooperated with the U.S. Government’s repeated efforts to take control over Venezuela. Venezuela has never invaded nor even threatened the United States.

This coup-attempt is purely an effort for imperialistic conquest of Venezuela, but it is cloaked in ‘democratic’ and ‘humanitarian’ lies, for fools, like America’s invasions and coups typically are. Only idiots can’t see what the U.S. pattern is here, especially after the lies that had suckered Americans in 2003 to support “regime-change in Iraq.”

Trump is continuing Barack Obama’s policy, which continued that of George W. Bush. Whatever changes in personnel occur within the U.S. regime, the regime itself remains basically the same, though its theatrics change, and that’s enough change to satisfy most Americans that we live in a democracy. Virtually all of the U.S. Congress supports these efforts to conquer Venezuela, and this fascism includes all of the Democratic Party’s Presidential candidates.

Therefore, none of the candidates are being challenged about their votes supporting this (or any other) attempted conquest by the U.S. regime. The neoconservative policy is bipartisan in America, though the personnel do change, from the representatives of one group of billionaires, to the representatives of another group of billionaires. And the vast majority of Americans think that it’s good, or at least okay — even after all of the lies have been exposed, they still approve. Of course, most Italians, Japanese, and Germans, thought favorably about their Government’s imperialistic conquests, during WW II; but Americans became opposed to that when we were hit by the Japanese at Pearl Harbor and Germany declared war against us.

The next day, August 7th, Venezuela’s Telesur headlined “EU Opposes Recent US Total Blockade Against Venezuela” and reported that Trump had failed to get the EU — his biggest hope for destroying Venezuela short of militarily invading it — to accept even that proposal.

The EU said “We oppose the extraterritorial application of unilateral measures.” They further said “A negotiated outcome remains the only sustainable way to overcome this multidimensional crisis.” The EU couldn’t muster enough fascists to go along with anything that the U.S. regime proposed.

At this point, Trump isn’t far from the moment when he will need either to abandon his effort to grab Venezuela in this round, or else spring a blitz invasion without allies. Even if he calls off the effort, that would only be temporary. Perhaps if and when he is re-elected, he will feel freer just to send in thousands of troops, tanks, and missiles, to get the job done.

However, if Russia stands firm, then such an invasion could spark WW III. He would have to decide whether grabbing the world’s largest oil reserves is worth that risk.

Meanwhile, he will almost certainly continue to try to make life as difficult as possible for the Venezuelan people, all the while blaming Maduro for their misery. This has been the basic American plan, since well before Trump occupied the White House.

At this stage, an American President is just a figurehead for one or another faction of America’s 607 billionaires, and it seems that whereas some of them demand conquest of Venezuela, none of the others opposes such a conquest. The only issue, therefore, for the American regime, is how and when to do that.

On August 8th, Venezuela, Iran, China, and Russia, held “war games” at Kaliningrad, Russia, on the Baltic coast, which military exercises had been organized by Russia, perhaps in order to indicate to Washington that a U.S. invasion against any of these four would be militarily responded to by all of the four.

This symbolic act warns the fascist, and fascist-accepting, regimes: Your imperialist alliance has 60 nations, but is fractious; ours, on the other hand — all resolute supporters of national sovereignty, and therefore opponents of imperialism — has 4 nations, but we are united.

Consequently, though “US warns off Venezuela’s supporters as Lima meeting opens,” Venezuela’s three allies here answered that verbal threat immediately after the Lima Group meeting, by a joint action, which symbolized that they are ignoring it.

Investigative historian Eric Zuesse is the author, most recently, of They’re Not Even Close: The Democratic vs. Republican Economic Records, 1910-2010, and of CHRIST’S VENTRILOQUISTS: The Event that Created Christianity

First published on The Saker