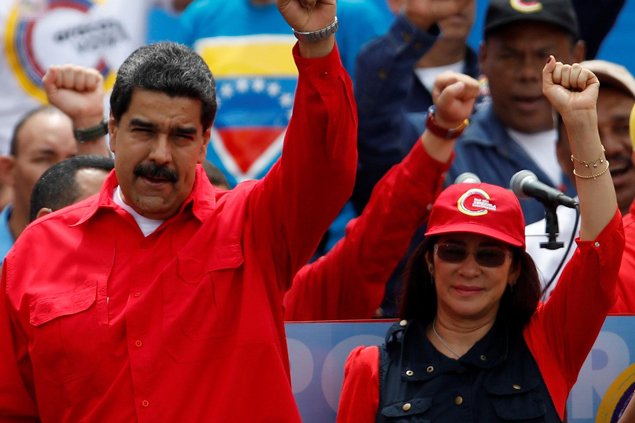 A series of background articles to Venezuela’s 20th May elections, which mark a critical moment. A violent and disruptive opposition has compounded serious economic difficulties, following twelve years of social progress achieved by taking control of the country’s oil revenues. Economic sanctions imposed by the US and its allies, with the clear goal of effecting regime change, are superimposed on the problems facing a country at the forefront of the challenge presented by the ‘pink tide’ of Latin American radicalism. Venezuela is once again at the centre of the continent’s long-standing battle with its pugilistic northern neighbour.

Views expressed by writers do not necessarily represent those of the editors.

Venezuela on the front line

14 May 2018. An international group of intellectuals and activists are demanding that media corporations inform on the upcoming Venezuelan elections in a more balanced and honest way, instead of reproducing a single narrative that is being spread by most media outlets.

3 May 2018. Nicolas Maduro is running for president in Venezuela’s May 20th elections, supported by his Unified Socialist Party, the Communist Party, the Homeland for All Party, Tupamaro Party, and a number of other independent left-wing groupings. He wrote thisop-ed for the Spanish newspaper El Pais.

Venezuela briefing: who is Henri Falcon?

Paul Dobson,  3 May 2018. Henri Falcon is running for president in Venezuela’s May 20th elections. He is the leading contender against incumbent Nicolas Maduro. The profile below was compiled by Paul Dobson for Venezuela Analysis.

The economic and social background

The past, present and future of Venezuela’s oil industry

Carlos Mendoza Pottella, Cira Pascual Marquina, 1 May 2018. Interview conducted on April 18, 2018. As the Venezuelan election nears, Venezuela’s dependence on its oil industry is at the centre of strategic discussion on its future. Carlos Mendoza Pottella is an economist and oil expert at Venezuela’s Central Bank (BCV),and recently spoke to Venezuelanalysis.com about the current crisis in the Caribbean country’s oil industry.

Andres Antillano: ‘The revolution has an outstanding debt to the socially excluded’

Rachael Boothroyd Rojas and Andres Antillano, 1 Mar 2018. Both the US and Canadian governments, and the opposition continue pushing a regime-change option. Sanctions continue while Tillerson, on his recent Latin American tour, openly called for  a military coup to depose the government. The opposition is  boycotting the election and even expelled presidential candidate Henri Falcon for participating in it.

In parallel, disinformation is widespread, the very real problems of shortages, inflation, and violence being portrayed as the justification for intervention. The reality is however far more complex than is generally recognised. In this interview, Professor Andres Antillano delves deep into the Bolivarian government’s security policies, the infamous OLP, and the phenomenon of violence in Venezuela.

Andres Antillano is Professor and Chair of the Department of Criminology at the Central University of Venezuela, a leading activist and scholar of violence in Venezuela

Ken Kalturnyk 29 March 2018. US Secretary of State, Rex Tillerson, made a six-day tour of Latin America in early February, visiting Mexico, Argentina, Peru and Colombia, with a final stop in Jamaica on February 7. The main purpose of his tour appears to have been to whip up support for further interventionist measures against Venezuela. However, he used the opportunity of the visit to Latin America as a forum to lobby against Russian and Chinese influence in the region, as well. Kalturnyk sets this visit in the context of the global situation facing the US empire.

This article was the basis of a talk presented to Winnipeg’s Venezuela Peace Committee on 3 March 2018.

By Ryan Mallett-Outtrim, Jan 5, 2018 Harvard economist suggests fixing Venezuela’s ‘Humanitarian Crisis’ by just bombing everyone. Apparently the best way to fix an economic downturn is by replacing it with a full-blown humanitarian catastrophe.

Who is in the right in the Canada-Venezuela diplomatic dispute?

Yves Engler, December 29,2017 2018. Lying is so common in diplomacy that it can be hard to tell heads from tails in international disputes. In the recent tussle between Caracas and Ottawa, for instance, Venezuela says it is trying to protect itself from foreign ‘interference’ while Canada claims it is promoting ‘democracy and human rights’. Given the ever-present possibility of a complete disregard for truth on both sides, which government might be more credible in this instance?