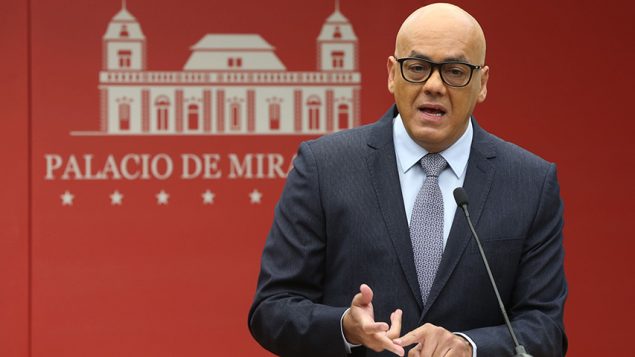 Jorge Rodriguez, Venezuelan Minister of Communication and Information, has announced that the Western media’s attempts to blame the country’s Bolivarian National Guard (GNB) for the violence on the Simon Bolivar-Venezuela border bridge at the weekend is a deliberate falsehood, as videos clearly show that that the burning of the two vehicles was caused by opposition youths, or Guarimbas, throwing Molotov cocktails.

On Sunday, Venezuelan Minister of Communication and Information Jorge Rodriguez revealed the truth of the violence on the Simon Bolivar-Venezuela border bridge. His revelations show the falsification of reports by mainstream media related to Saturday’s violence.

“We have to denounce to the world the immense and powerful operation of false flags attacking Venezuela,” stated the Bolivarian politician.

Rodriguez revealed videos made from the protests which evidently shows that the burning of the two vehicles, which the mainstream media blamed on members of the Bolivarian National Guard (GNB), which occurred on the Colombian side, but was in fact caused by Molotov cocktails thrown by opposition youths, or Guarimbas.

He also stated that two of the people who carried out violent acts in the border are already in custody. Investigators are also saying there are indicators showing the incident may have been premeditated.

“There was no intention of bringing humanitarian aid, it was the aggression of a foreign country against another country that has not done anything to that country.”

“Colombia is a country that is expert in false positives, we will show the tests. There was no intention of bringing humanitarian aid, what they were trying to do was an aggression against a country that defends its sovereignty,” he said.

Also, the minister shared records showing how two tanks taken by deserters who hijacked the GNB vehicles, attacked people present on the bridge, running over two women, a National Guard official and a Chilean photojournalist, Nicole Kramm, and then crossed to the Colombian side.

The minister asked, “If it was true that they wanted humanitarian aid, why was the first thing to run over people with the tanks?

“The intention of the opposition was to kill the people who daily transit between the border of Venezuela and Colombia. Everything that happened was on the Colombian side with the complicity of the police and the government of Ivan Duque, there are pictures of the policemen next to the police,” he said.

Rodriguez didn’t waste time, going straight for the hard questions, demanding to know if Juan Guaido truly believes himself to be an “interim president” and is concerned about Venezuelans’ health situation, why hadn’t he named a minister of health?

“Guaido is a false flag himself,” said Rodriguez.

“In face of everything that they had planned, it is truly very commendable that Venezuela has dawned in peace today Sunday, Feb. 24,” he said.