Venezuela briefing: who is Henri Falcon? 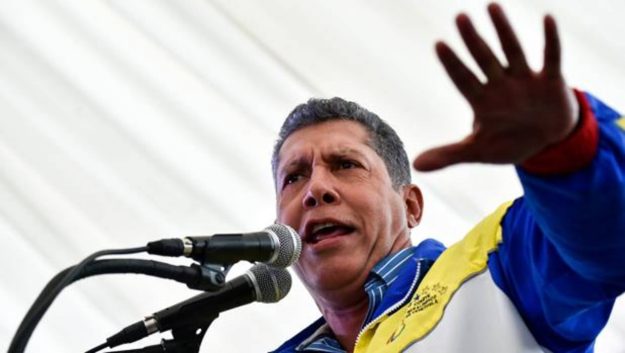 Henri Falcon is running for president in Venezuela’s May 20th elections. He is the leading contender against incumbent Nicolas Maduro. The profile below was compiled by Paul Dobson for Venezuela Analysis.

What is his background?

Born in the rural Yaracuy State, Falcon (57) is a lawyer by profession and currently is a father of four. Whilst not being a military man, he served limited time in the armed forces as a young adult.

Falcon is famous in Venezuela for his changing political alliances. He was a founding member of Chavez’s patriotic MBR-200 movement in 1994 and its political party successor , the Fifth Republic Movement (MVR), which was founded in 1997. Upon the dissolution of the MVR in 2007, he joined Chavez’s United Socialist Party (PSUV), being briefly expelled in 2008 for “indiscipline”, before Chavez rapidly reinstated him.

In 2009, following the halting of a public mass transport project in Lara, Chavez requested that Falcon be investigated for corruption.

The dispute subsequently led Falcon to resign from the PSUV in 2010, citing a conflict with Chavez over internal party organisation, joining the Homeland for All (PPT) party. He subsequently took this party rightwards, aligning it with the opposition anti-Chavista Democratic Unity Roundtable (MUD)[1] before founding his own regional party, Progressive Advance in 2012.

His notable success and administrative experience on a local level led 2013 MUD presidential candidate Henrique Capriles Radonski to appoint him as his campaign chief.

His alliance with the right-wing MUD lasted until early 2018 when he was expelled for registering as a candidate in the upcoming presidential elections. However, tensions between Falcon and other right-wing leaders, who never truly trusted him due to his Chavista background, are not new. In 2014 and again in 2017, the ex-governor provoked the ire of MUD hardliners such as Leopoldo Lopez and Julio Borges when he publicly spoke out against the opposition’s insurrectionary tactics of anti-government street violence, despite tacitly supporting them in Lara State). Falcon was prominent in the 2014 government-opposition talks.

Which political parties are backing him?

His own regional party, Progressive Advance, as well as the Christian Democrats (COPEI), the social-democratic Movement Towards Socialism (MAS) party, and the rightist Venezuelan Ecological Movement (MOVEV).

What are his proposed policies for Venezuela?

Falcon has appointed Torino Capital economist Francisco Rodriguez as chief economic advisor for his campaign and has openly supported bringing in a dual dollar-based economy to Venezuela which he claims will resolve the severe problems of national currency devaluation and soaring inflation .

He proposes direct dollar payments of USD$25 to individuals and $15 to children through a bank card system as well as dollarizing wages and pensions. This May 1 he even promised to set the minimum salary at USD$75 (well above its current equivalent in local currency). He has also commented in the past that he plans on maintaining the bolivar for other payments.

Falcon’s government plan mentions returning expropriated companies and land back to the private sector. Likewise, he promises to do away with “controls” put in place by the Bolivarian governments of Chavez and Maduro, presumably referring to currency restrictions and consumer price regulations.

In the international arena, he pledges to seek “international financing,” overtly courting the IMF and World Bank, and highlights the need to “open” state oil firm PDVSA to private sector investment.

He also looks to recover “traditional” markets, especially the USA, as well as “leaving behind” those agreements which he considers prejudicial to Venezuela’s development and economic competition, including suspending the PetroCaribe program, which exports subsidized Venezuelan crude to 18 Caribbean and Central American nations. He will also request a temporary suspension in Venezuela’s international debt payment obligations.

Domestically, he plans to set up a government of “national unity”, although it is unclear if this will include Chavistas. He has stated that the day following his electoral triumph he will free all whom he he calls “political prisoners”, a controversial position among many Chavistas who consider many jailed opposition militants “terrorists”.

He promises to re-found the ‘State of Rights’ and promote administrative decentralisation in many areas.

Falcon likewise pledges to eliminate state subsidies on services like water and electricity – in place to guarantee access among the poor –as well as reduce the administrative costs of government. He also mentions introducing a fiscal reform and the promulgation of a law of regional and local budgeting. He suggests tax breaks for Venezuelans who have emigrated in recent times in a bid to encourage them to return.

Finally, he plans to do away with the controversial Orinoco Mining Arc initiate which looks to exploit Venezuela’s vast mineral reserves in the southeastern state of Bolivar.

Falcon in a quote?

Who is his typical voter?

Falcon will look to take advantage of discontent over Maduro’s economic handling of the country to galvanize middle and upper class voters as well as disillusioned working class sectors.

What is his election slogan?

What will he try to make the elections about?

The economy:if Falcon can channel the considerable unpopularity of the Maduro administration’s management of the crisis, he stands a good chance of defeating the incumbent.

What are his main challenges?

Firstly and foremost he must win over the opposition’s traditional support base. Following his expulsion from the MUD and their call to abstain in the elections, one of Falcon’s challenges is going to be mobilizing middle and upper middle class anti-Chavista voters, many of whom accuse him of being a Maduro-backed trojan horse, only there to legitimise the elections.

As Venezuelan sociologist Ociel Lopez argues, Falcon must “win back the historic voter who is currently submerged in depression and the abstentionist call… [who have] enough power to bring down any attempt to go through the ballot box.”

He must also win over the Venezuelan masses beyond his support base in Lara state if he stands a chance.

As Lopez puts it: “he must advance in the decisive “soft vote” which is the majority, the popular classes and the lower middle classes. This is the vote of millions which will make the difference. In this sector there is a strong mistrust of opposition politicians.”

Falcon must also win the trust of Venezuelans who have migrated in recent times who are able to vote through the embassies and consulates and who are most susceptible to the abstentionist call.

Finally, and decisively, he must win over the “soft chavistas” who benefit from state social programs but do not necessarily have any strong political affinity for the current government. This sector is absolutely essential as it has the strength to make the country “ungovernable” for an opposition president.

Meanwhile, Falcon’s candidacy has thrown a wrench into the MUD-Washington strategy of delegitimizing the upcoming elections in order to justify further sanctions and other escalating efforts aimed at regime change at any cost. To this end, the Trump administration has reportedly gone as far as to threaten Falcon with sanctions in a bid to dissuade him from running, and it wouldn’t be surprising if he suffered from more direct international pressure led by the US.

Where can I read more about him?

[1] The PPT has since modified its political line and is currently aligned with the PSUV as part of the Great Patriotic Pole (GPP) alliance.
Editors’ Note: While we don’t necessarily share the views we publish on New Cold War, we do attempt to provide readers with a range of views. This is because your right to make your own mind up depends on your being fully informed.
Share
Tweet
Share
Pin