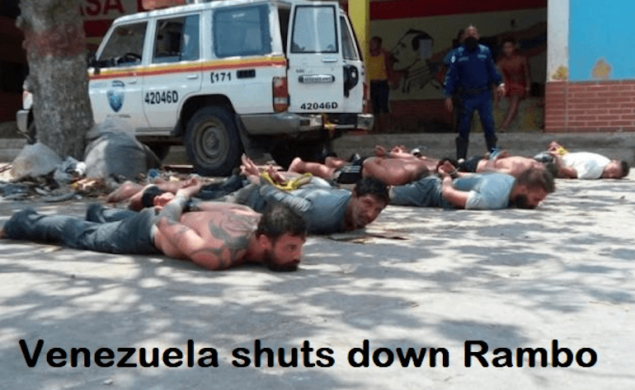 COHA: Guaidó and the Failed Military Operation against Venezuela: A Story of Betrayal and Financial Corruption:

The evidence shows Guaidó and his advisors cannot deny their involvement. The money comes from the ample funds the U.S. has illegally confiscated from the Citgo oil company. Many in the Opposition, particularly in the U.S., have already been coming down hard on Guaidó for abandoning the former Venezuelan military officers.

This case proves several fundamental points: That Guaidó is handling large sums of money; his constant attacks on the Venezuelan government are to limited effect; and he has not managed to break the unity of the Venezuelan military. It is also clear that he is financing semi-clandestine private activities, with nothing to show for it so far. And he is willing to hire mercenary forces to launch adventurous military attacks that risk the lives of the participants and of civilians in Colombia and Venezuela.

While the moderate opposition forces continue to engage in talks with the government of Nicolás Maduro, an increasingly isolated hard-line faction continues in its efforts to uphold the U.S. sanctions, to validate foreign military intervention, and to launch paramilitary attacks.

Washington’s $55 million in rewards, that’s a bit of an incentive for would-be Rambos. They were an assault group of about 60 men, with another 50 or so fifth-columnists already behind enemy lines, all hell bent on regime change. They were going up against the Venezuelan army’s 130,000 active duty soldiers and another 220,000 paramilitary loyalists. Eight “professional American mercenaries” had been killed and 23 captured, including two ex-Green Berets and a retired DEA agent. Steve Ellner noted that“Guaidó was at first on board with the plan but then grew wary of it, realizing it was doomed to failure.” “Obviously Goudreau was confident that once the military incursion showed signs of viability, the rebels could count on the solid backing of Washington and Bogotá.” “After having undertaken several abortive and embarrassing attempts to overthrow Maduro with the support of Washington in 2019, [Guaidó] is now more cautious, having learned from those frustrating experiences.”

AP reported that Goudreau—who allegedly first met opposition leader Guaidó through one of Trump’s bodyguards—had been running a series of paramilitary training camps in Colombia.

OrinocoTribune: Pompeo, on the Failed Mercenary Incursion in Venezuela: “If We Had Been Involved it Would Have Gone Differently”:

(I think it went the way it did because the US was involved) Pompeo said that they will use “all the tools” to repatriate the US citizens detained in Venezuela. Pompeo, denied the US was ‘directly” involved in the attempted mercenary incursion into Venezuela. “As for who bankrolled it, we’re not prepared to share any more info about what we know took place. We’ll unpack that at an appropriate time.. we’ll share that information that makes good sense..”

The practice of regime change has been outsourced from the US  government itself to semi-private corporations, giving the White House some form of plausible deniability. The only reason Goudreau produced the documents is that Guaidó stiffed him for the money, refusing to pay even a $1.5 million retainer fee. “They kept promising to pay, week after week,” he revealed in an interview with a Spanish-language TV station. This sort of behavior is perhaps not unexpected coming from a politician who promised Mike Pence that he controlled half the Venezuelan military and is widely accused of embezzling over $90 million of U.S. public money.

Last Wednesday, Secretary of State Mike Pompeo announced that his plans for “restoring democracy” in Venezuela were “gaining momentum” and that he had already made plans to reopen the American embassy in Caracas. The next day, Washington’s regime change specialist John Bolton cryptically announced that “morning is coming to Venezuela again” soon.

By Sunday, the coup plotters were lying face down on the concrete, zip-tied, some appearing to have wet themselves in terror when coming into contact with the employees of the “house of socialist fisherman” in the sleepy coastal village of Chuao.

Twitter deleted the accounts of Venezuela’s state-owned electricity company just before an attack on the power grid on Monday.

The coordination of the United Nations System (UN) in Venezuela requested authorization from the National Government to study the strategy of suppression of the Covid-19 pandemic, with the objective of replicating it in other nations..

Pompeo: “Maduro’s thugs looted nine tons of gold bars and sent it to the Iranian regime. The world’s leading thieves are partnering with the world’s leading state sponsor of terror. The greatest victims are the Venezuelan and Iranian people,” he tweeted out Saturday, having earlier told reporters that “these flights [between the two nations] must stop and countries should do their part to deny overflights just as many have already denied landing rights to this sanctioned airline.”

Calling democratically-elected officials “thugs” and “thieves” is pretty rich, especially coming from a government that has been compulsively confiscating, stealing and hijacking shipments of lifesaving medical equipment during a global pandemic, from nations rich and poor alike.

The idea that the elected government of a sovereign nation using its gold reserves in a time of crisis represents “looting” is especially notable, seeing as Pompeo himself ordered the United Kingdom to confiscate $1.2 billion worth of Venezuelan gold in the Bank of England last year, sparking a major diplomatic incident.

TeleSur: Solidarity vs. Sanctions in Times of a Global Pandemic:

Chinese and Cuban doctors have been providing support in Iran, Italy, Spain and have offered their services and expertise to the most vulnerable countries in Latin America, Africa, and Europe. They have developed medicines and medical treatments such as Interferon Alpha 2B in Cuba, one of the potential medicines to combat the virus, which reduces the mortality rate of people affected by COVID19. But above all, they have offered their interest in distributing them to the peoples of the world without any patent or benefit whatsoever.

China, for its part, has sent health aid to more than 80 countries during this crisis. In the cases of Italy, Spain, Cuba, Venezuela, Iran and other countries, the Chinese government also sent doctors and infectologists specialized in treating the pandemic.

In Bolivia, the government was quite slow to react to the pandemic and, when it finally acted, did so in an incoherent manner.The government shifted to a complete lockdown on March 22, imposed under threat of large fines (up to $450) and jail time (up to 10 years) for those who did not comply. Police and military were granted special powers to ensure compliance. By April 11, almost 10,000 people had been arrested for violating lockdown restrictions. In comparison, Bolivia had only carried out 4800 COVID-19 tests by April 23.

Unlike Bolivia, Venezuela was much quicker to move, contacting China early to obtain details about how it dealt with the pandemic. On the basis of this information, it obtained a huge number of COVID-19 testing units and personal protective equipment for health workers.

Today, it leads the region in terms of testing, having carried out more than 350,000 tests. Due to this testing regime, it has only detected 288 cases and registered just 10 deaths, despite having a population two-and-a-half times larger than Bolivia. Doctors, together with local community activists, have been going door-to-door to seek out potential cases of COVID-19.

Rarely in any process, perhaps never in a political process, has a thought, a mind, an intellect been able to make such a significant contribution. Lenin was a tireless investigator and worker. It can be said that after acquiring political consciousness, he did not rest a single moment during his lifetime. He did not cease to investigate, to study, and to work on charting the revolution’s course.

Cuba has more than 800 medical personnel serving humanity in the trenches of 16 countries against the dreaded coronavirus.To contribute to the Campaign to Support Cuba’s Contribution to World Fight Against COVID-19: cheques should be made out to the “CNC,” with “COVID-19” written in the memo, and then mailed ($1.20 from US) to: c/o Sharon Skup, 56 Riverwood Terrace, Bolton ON L7E 1S4

Cuba and the Coronavirus: Webcast video with Cuba’s Ambassador to the US José Ramón Cabañas

President Daniel Ortega Message to the Virtual Summit of the Non-Aligned Movement:

Summary of Diana Martínez, president of the Fundación Entre Mujeres (FEM). “The hatred displayed by the opposition is visceral. Those people couldn’t take power in their attempted coup a couple of years ago, so they are now hoping this virus will do for them what they were unable to do. We Nicaraguans are handling this virus by trusting in the transformations our society has been making, especially with community health.”