Venezuela Air Force General killed in ambush, as Guaido’s hints at a US military intervention 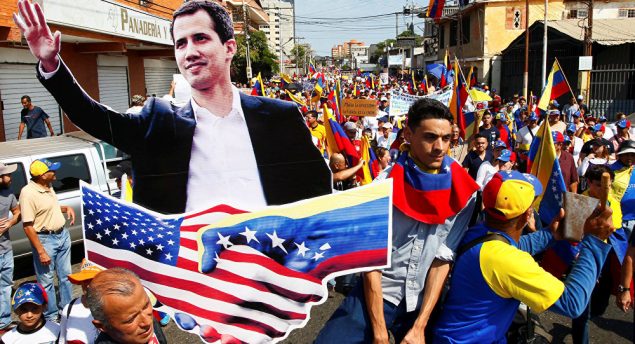 Guaido’s Hints At A US Military Intervention

Three Venezuelan officers from a mixed military commission were killed on May 4, following an ambush by a group of heavily armed people, the identity of whom were unknown.

On May 4th, a group of unrecognized heavily armed people ambushed a mixed military commission in Venezuela on May 4th. Three officers were left dead in the attack.

After an exchange of shots with an unrecognized group of heavily armed individuals, the brigadier general of the Bolivarian Military Aviation (AMB), Jackson Silva Zapata, and two officers of the Aragua Police identified as Bruno Manuel Benavidez, 34, and Jesús Eduardo Arraiz Sánchez, 30, both with the rank of chief officer were killed.

In an interview with the Washington Post, Guaido said that he acknowledged errors made in his attempt to stir a military uprising. He further said he didn’t discard an option of a US military intervention and that if a “proposal” was made by Washington, he would take up to vote in the opposition-controlled National Assembly.

“Guaidó suggested that he expected Maduro to step down amid a groundswell of defectors within the military. Instead, Guaidó’s call for the rank and file and senior brass to abandon Maduro did not produce mass defections. Maduro’s security forces then quelled street protests and left Guaidó’s U.S.-backed opposition on its heels.”

“Maybe because we still need more soldiers, and maybe we need more officials of the regime to be willing to support it, to back the constitution,” Guaidó said. “I think the variables are obvious at this point.”

If US National Security Adviser John Bolton would hypothetically call him with a proposal of a US military intervention, Guaido would presumably say the following:

“Dear friend, ambassador John Bolton, thank you for all the help you have given to the just cause here. Thank you for the option, we will evaluate it, and will probably consider it in parliament to solve this crisis. If it’s necessary, maybe we will approve it.”

“That’s great news to Venezuela because we are evaluating all options. It’s good to know that important allies like the U.S. are also evaluating the option. That gives us the possibility that if we need cooperation, we know we can get it.”

“I think today there are many Venezuelan soldiers that want to put an end to [leftist guerrillas], and help humanitarian aid get in, who would be happy to receive cooperation to end usurpation. And if that includes the cooperation of honorable countries like the United States, I think that would be an option.”

The BBC interviewed Guaido as well. He also said that he would consider “asking” for a US military intervention.

“I think President [Donald] Trump’s position is very firm, which we appreciate, as does the entire world,” he said.

Asked whether he would like Trump and the US military to intervene, he responded it is “responsible to evaluate” the possibility of international intervention, adding: “I, as the president in charge of the national parliament, will evaluate all options if necessary.”

John Bolton himself continued his usual rhetoric against Venezuelan President Nicolas Maduro’s government and its supporters.

US President Donald Trump on May 4th further said that Maduro must go, the dictatorship must end, and that the US would not tolerate any foreign military influence in the Western Hemisphere.

"I'd like to begin by sending our prayers to the people of Venezuela in their righteous struggle for freedom. The brutal repression of the Venezuelan people must end." pic.twitter.com/Bz6wQJHnN3

US Secretary of State Mike Pompeo reiterated his support to the opposition, and claimed that the US supported a peaceful transition, despite expressing support of a military coup just days earlier.

My message to the Venezuelan people is clear: the United States stands firmly with you in your quest for freedom and democracy. Your bravery and voices will put Venezuela on the path to liberty and prosperity, and we will partner with you every step of the way. #EstamosUnidosVE pic.twitter.com/poznzEPKYR

The repression perpetrated by Nicolas Maduro has no limits. Regime forces attacked a Catholic service, driving motorcycles into the church, using tear gas and injuring many. We stand with the people of #Venezuela and interim President @jguaido to support a peaceful transition.

#InPictures | Foreign Ministers of #Russia #SergeyLavrov and #Venezuela @jaarreaza in search of an international strategy to promote dialogue and strengthen their relationship. Both representatives reject the destructive approach of the #US. #HandsOffVenezuela pic.twitter.com/odu68VqDqq

In the opening remarks, Lavrov expressed Russia’s support for the Venezuelan government and said that regime change actions were in contrast with any claims of democracy.

“You know Russia’s principled, consistent and firm support of the Venezuelan government, which is headed by Nicolas Maduro. We are currently witnessing an unprecedented campaign led by the USA to overthrow the legitimate authorities in Venezuela. We condemn it as it grossly violates all the principles of international law enshrined in the UN Charter. Apparently, it concerns not only Venezuela but also Washington’s pattern for the political reshuffling of Latin America in line with the notorious Monroe doctrine, which reflects a complete lack of respect for the peoples of Latin America and Caribbean countries.”

He further mentioned the phone call between Russian President Vladimir Putin and US President Donald Trump on May 3rd.

“We call on both Americans and everyone who supports them to give up irresponsible schemes and act exclusively within the framework of international law, as President of the Russian Federation Vladimir Putin suggested during his telephone conversation with US President Donald Trump on May 3.”

Lavrov is to meet US Secretary of State Mike Pompeo in Finland on May 6th – 7th. Pompeo is expected to tell the Russians “to get out of Venezuela.”

“Cooperation between Russia and the US can play a very significant and positive role in solving most issues, if we are building this cooperation on the principle of finding common approaches,” Lavrov said regarding the meeting.