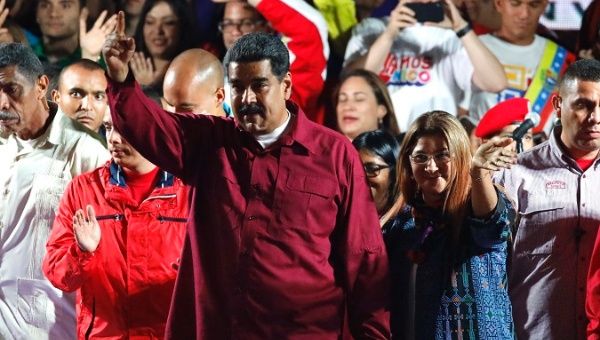 Venezuela’s President Maduro stands with supporters after the results of the election were released in Caracas. | Photo: Reuters

Following his victory in the 21st May Venezuelan elections, President Nicolas Maduro has called for a lasting dialogue with all the country’s opposition parties and for citizens to leave behind the strife and make way for reconciliation with all sectors of the country. Speaking from the balcony of the Miraflores Palace,, he reiterated that dialogue was the only way the South American could end infighting.

From the balcony of the town in the Miraflores Palace, the Venezuelan president reiterated that dialogue is what the South American nation needs and not enfighting.

Venezuelan President Nicolas Maduro called for a lasting dialogue with all the country’s opposition parties and for citizens to leave behind the strife and make way for reconciliation with all sectors of the country.

Speaking from the balcony of the Miraflores Palace, Maduro, who was re-elected Sunday, reiterated that dialogue was the only way the South American could end infighting.

Highlighting the level of participation in the election, which saw him capture an estimated 68 percent of the popular vote, Maduro said: “It has been a heroic, beautiful, popular victory forged in the struggle.”

“I’m the president of all of the Venezuelans. I call for a dialogue process. Permanent dialogue is what Venezuela needs,” he said.

“The revolution is here to stay!” Maduro later told the crowd, promising to prioritize the country’s economy and socioeconomic development during his new term and fight off “imperialism” from the external forces, which tried to derail the country’s election.

“If the empire or the right-wing governments of the region want, someday, to talk in peace and respect I’m always open to dialogue,” Maduro said.

Adding: “To the empire, I say: understand that Venezuela is the warranty of social and political stability in our country and the region. It’s a sin to try and destabilize Venezuela.

With most of the votes counted, Maduro had 5.8 million votes, while his closest rival, former governor Henri Falcón getting 1.8 million votes, said CNEPresident Tibisay Lucena who added that in total, 8.6 million Venezuelans voted, out of an electoral registry of 20.5 million people.

Falcon, who had promised to change Venezuela’s currency, said he wouldn’t recognize the results, claiming that they were “illegitimate.” He also blamed abstentionist in the opposition for his loss and called for new elections to be called for October.

“I do not have any doubt about the voting process. It is an advanced automatic voting system. I come here to keep the peace, coordinate and promote dialogue to improve the democratic mechanism here. What I need to do here is to see whether people can cast their ballots at their own discretion. Now we all see how people vote, don’t we?”

Other international observers monitoring the Venezuelan elections said Sunday that the vote took place without any incidents, in an atmosphere full exercise of civic duty.