Venezuela activist: ‘The economic war has caused huge damage to the country and people’ 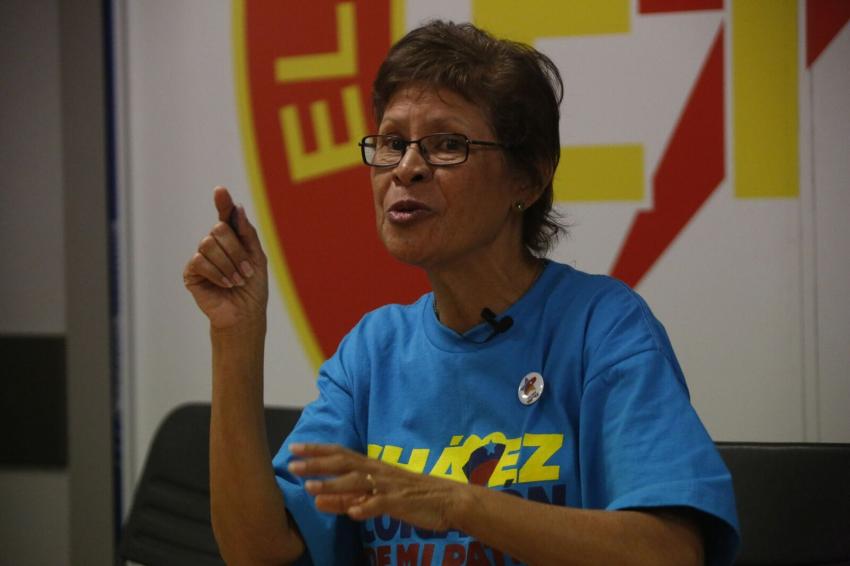 By Federico Fuentes and Eulalia Reyes de Whitney, 10 May 2018. Venezuela votes in two days. In this election, incumbent Nicolas Maduro, backed by an alliance including his own party and a range of parties to his left, contests with significant opposition candidate Henri Falcon and three other opposition candidates. The opposition itself has divided into one part which is participating in the election and another which is boycotting the elections and calling for Maduro’s ouster by unspecified, non-electoral means. The election will be overseen by 2,000 foreign observers. The USA has expressed its view of Venezuelan democracy by demanding that the elections should be called off,  and has called for the military ouster of Maduro.  Curiously the decision is not under consideration in the USA as a fraudulent intervention into the Venezuelan elections.

Venezuelans have time and again shown the world how much they value democracy and free elections’, said Venezuelan activist Eulalia Reyes de Whitney. Campaigning is well underway for Venezuela’s May 20 national vote to elect the nation’s president and representatives to municipal councils and state legislatures. The elections are being held in the context of the ongoing political polarisation and economic crisis that have wracked the nation over the past few years.

Incumbent President Nicolás Maduro, who has pledged to defend and strengthen the pro-poor Bolivarian Revolution initiated by his predecessor, Hugo Chávez, is currently leading in the polls. His main competitor is Henri Falcon, a former pro-Chávez governor who joined the opposition in 2010. Fearing a Maduro victory, the United States — which on May 7 announced a new round of sanctions on Venezuela — and the European Union are threatening to not recognise the results. This is despite having demanded Maduro call early elections only months ago.

Venezuela’s main opposition coalition, the Democratic Unity Roundtable (MUD), has followed suit: having been involved in dialogue talks with the government late last year that included the issue of early elections, the MUD is now calling for a voter boycott and nationwide protests to denounce “fraud”, four days before the election. However, with election day approaching, divisions within the opposition have opened up, with some sectors swinging behind Falcon’s campaign. Among them are a bloc of opposition MPs that have created the “Let’s Change” platform and former MUD secretary general, Jesus Chuo Torrealba.

Presidential candidate Luis Alejandro Ratti announced on May 8 he was stepping down to support Falcon’s campaign. A meeting between Falcon and the other main opposition candidate, former evangelical pastor Javier Bertucci, was held the following day to discuss the possibility of a united candidate. Results of a Hinterlace poll released in early May indicate that participation in the elections will be about 63%.

To get a sense of the election campaign and situation in Venezuela today, Federico Fuentes spoke to Australia Venezuela Solidarity Network (AVSN) Brisbane co-convenor Eulalia Reyes de Whitney, who has been back in her home country for the past several months.

Last May Day was held in the midst of rising opposition violence. This May Day, a presidential election campaign is underway. Can you tell us a bit about the mood at the rally and more generally in Venezuela?

The mood at the May Day rally, and in Venezuela in general, is of great confidence, hope and unbroken determination to face the challenges and threats that the US administration, in conjunction with the EU and a number of right-wing Latin American countries, represent to the country today. If the May Day rally could be taken as a barometer for the May 20 elections, we can already talk about a resounding victory for President Nicolás Maduro Moros.

Last year’s rally, which was held in the midst of the violence that dominated the country for four months, was big. But speaking to people at this year’s rally, they noted that attendance last year was impacted on by reservations due to the climate of violence and death at the time. In contrast, this year they were ecstatic at the number of people present. There were hundreds of thousands of workers from different social movement, organisations, leftist parties and trade unions. People arrived from the most remote parts of the country to attend; travelled during the long hours of the night to celebrate their day and lend their support to Maduro.

It’s a great atmosphere, one that I have been lucky to have experienced on more than one occasion. And each time the sentiment has been the same: determination to continue building the socialist society promised by the undefeated late president Hugo Chávez Frías.

How difficult has the economic situation become for people? Who do people blame for the difficulties and how do they view the actions of the government in trying to overcome the situation?

It is difficult to present a clear diagnosis on the economic situation that Venezuelans have so stoically suffered for a long time now. This situation, described as an “economic war”, has caused huge damage to the country and its people.

It is very powerful seeing how people in general have been nearly overcome by the shortages, particularly in foods and medicines, but also in almost everything they need to get by. The shortages have caused huge fear and competition in the marketplace, leading to incredibly high prices and making it almost impossible for the more vulnerable, for the poor in the country to get access to the goods they need. It has created a lot of misery and poverty.

This so-called economic war has generated a change in people’ behaviours. At first, people generally viewed it as an attack by big corporations, in which basic foods, medicines and services were first denied to them, and then sold at unbearably high prices.

But this led to a phenomenon where people buy to hoard and resell to others at speculative prices. This has led to the rise of a “black market” and a general rise in criminality. While there is the perception that the economic war has impoverished many, it has also enriched a lot of people inside and outside the country. The answer to who do people blame for the difficulties varies depending on who you ask. Venezuela has been very polarised for a long time now, and more so since the start of the Bolivarian Revolution.

Undoubtedly, opposition leaders have sought to create the idea that the culprit of everyone’s miseries is the government. There have been recurrent attempts to try to pit Maduro against Chavez’s legacy, to differentiate between the two, with the aim of breaking down confidence in Maduro among Chavistas. At different times this has created doubt among some people, but Maduro has been in government long enough for people to see through this. Most of the population, even if many don’t admit it openly, know who the real culprit is and, more importantly, what is behind this campaign.

We can also see that people acknowledge the efforts of the government in trying to overcome the many problems that the economic situation has brought. The measures to help people are many and varied: there has been an incredible number of salary rises for workers at every level – 22 in the past five years under Maduro – and for pensioners as well. These salary rises are seen as a counteroffensive against the attacks on the quality of life.

The social missions [that provide free social services such as education, health, housing, etc], even despite the difficulties, have been largely maintained.

How do people view the upcoming elections, particularly in light of the opposition boycott? Are people expecting that Maduro will win easily, or will it be a difficult contest?

Venezuelans have time and again shown the world how much they value democracy and free elections. They have also demonstrated their determination to defend their gains and their desires to live in peace, despite the threats, menaces and blackmail coming from the Trump administration – and Barack Obama before him; from the EU; and from submissive Latin American presidents such as Juan Manuel Santos in Colombia, Michel Temer in Brazil and Mauricio Macri in Argentina, to name a few.

The upcoming May 20 elections will be the 25th in less than 20 years of the Bolivarian Revolution. It will be the fourth election in the past 10 months. And contrary to what others think and the calls for people to refrain from voting, the country is already getting into the mood for the electoral process. They know that the threat of attacks or an invasion from the North are real, and that the only way to demonstrate to the world how determined they are to defend their sovereignty is by going out to vote on May 20.

Many expect Maduro will win easily, but not everybody. At times, it’s difficult to sense what people are thinking. In my personal view, it’s my resounding wish that this happen, but I also see and hear the many complaints from people and at times I myself feel uncertain. Having said that, seeing the electoral campaign by Maduro and the response to it, I have no doubts he will win – and easily.

What have been the main issues of debate in the election campaign? What are the candidates proposing as a way out of the current situation? The main issue for the four opposition candidates is to get rid of Maduro and the revolution to return the country to capitalism. Falcon is an ex-government supporter and is viewed as a traitor to the revolution. He is a former governor of Lara state and the candidate for the Progressive Advance Alliance. He is proposing to dollarise the economy and make the US dollar the currency of the country, as a way to combat the country’s economic crisis. He has pledged to lift Venezuela out of the crisis by seeking foreign help.

Javier Bertucci, an evangelic minister, is the candidate for the Hope for Change party. He is proposing to seek foreign aid to lift the country out of the crisis and has pledged to modernise the tourism industry. He has also promised to eliminate currency exchange controls, restructure existing social programs and eliminate the Homeland Card, which is a basic tool that the government has used to help people get through these difficult times.

Luis Alejandro Ratti, an independent candidate, is proposing to eliminate the National Constituent Assembly [elected last June with the aim of reforming the country’s constitution], which he defines as “Madurista” and convene another one that he says will be genuine and not compromised by politics. He has said he will encourage foreign investment in the country and pursue closer relations with the US.

Reinaldo Quijada is the candidate for the Popular Patriotic Union 89 (UPP89). He was a supporter of the late Hugo Chávez, but has distanced himself from Maduro. His program, which is called “The way to exit the crisis”, proposes to give autonomy to each branch of the state, and to create a sixth branch to manage the country’s currency and economic affairs. He has also pledged to seek foreign investment and promote the private sector in the country.

Maduro, who is standing for re-election as the candidate of the revolution, is proposing to advance and consolidate the Bolivarian Revolution started by Hugo Chávez, with all its gains and social programs; to continue to move towards a socialist state; and to defeat the economic war that has brought so much pain and misery to the country.

He is promising to push forward with an economic revolution to combat the foreign financial attacks that his government has endured and has pledged to keep and strengthen the Bolivar Fuerte as Venezuela’s currency and strengthen the international market for the new cryptocurrency, the Petro.

Maduro has also promised to modernise and relaunch the social missions.