MOSUL, Iraq — The price Mosul’s residents paid in blood to see their city freed was between 9,000 and 11,000 dead, a civilian casualty rate nearly 10 times higher than what has been previously reported. 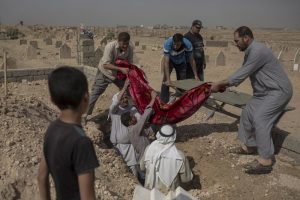 The number killed in the nine-month battle to liberate the city from the Islamic State marauders has not been acknowledged by the U.S.-led coalition, the Iraqi government or the self-styled caliphate. But Mosul’s gravediggers, its morgue workers and the volunteers who retrieve bodies from the city’s rubble are keeping count.

Iraqi or coalition forces are responsible for at least 3,200 civilian deaths from airstrikes, artillery fire or mortar rounds between October 2016 and the fall of the Islamic State group in July 2017, according to an Associated Press investigation that cross-referenced independent databases from non-governmental organizations. Most of those victims are simply described as “crushed” in health ministry reports. The coalition, which says it lacks the resources to send investigators into Mosul, acknowledges responsibility for only 326 of the deaths.

“It was the biggest assault on a city in a couple of generations, all told. And thousands died,” said Chris Woods, head of Airwars, an independent organization that documents air and artillery strikes in Iraq and Syria and shared its database with the AP.

“There doesn’t seem to be any disagreement about that, except from the federal government and the coalition. And understanding how those civilians died, and obviously ISIS played a big part in that as well, could help save a lot of lives the next time something like this has to happen. And the disinterest in any sort of investigation is very disheartening,” Woods said, using an alternative acronym for IS.

In addition to the Airwars database, the AP analyzed information from Amnesty International , Iraq Body Count and a United Nations report. AP also obtained a list of 9,606 names of people killed during the operation from Mosul’s morgue. Hundreds of dead civilians are believed to still be buried in the rubble.

Of the nearly 10,000 deaths the AP found, around a third of the casualties died in bombardments by the U.S.-led coalition or Iraqi forces, the AP analysis found. Another third of the dead were killed in the Islamic State group’s final frenzy of violence. And it could not be determined which side was responsible for the deaths of the remainder, who were cowering in neighborhoods battered by airstrikes, IS explosives and mortar rounds from all sides.

But the morgue total would be many times higher than official tolls. Iraqi Prime Minister Haidar al-Abadi told the AP that 1,260 civilians were killed in the fighting. The U.S.-led coalition has not offered an overall figure. The coalition relies on drone footage, video from cameras mounted on weapons systems and pilot observations. Its investigators have neither visited the morgue or requested its data…

Read the full article, with extensive charts and photos, at the original weblink above. 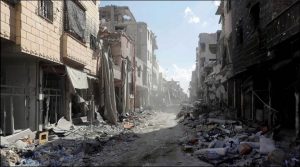 [An estimated 200,000 civilians were forced to flee Raqqa, Syria during its occupation by ISIS forces. An estimated 50,000 have returned so far.]