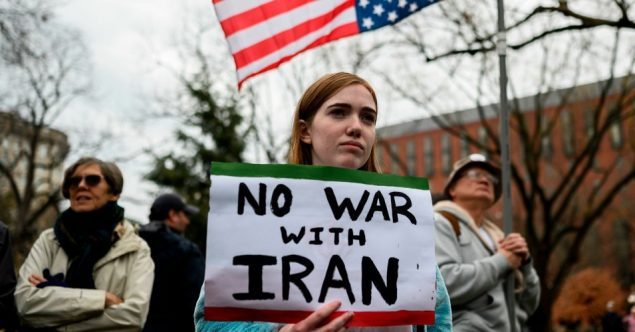 Perhaps the most fascinating aspect of this is the Republican senators who voted against Trump; basically, the libertarians. If only the Democrats had spent their fire on opposing the war, instead of the ridiculous impeachment attempt, they could have opened up this gap.

On February 13th, the US Senate voted 55-45 on the War Powers Resolution.

It was proposed by Democratic Senator Tim Kaine and it would require US President Donald Trump to pull any U.S. troops from military hostilities against Iran within 30 day unless he gets congressional approval for the military actions.

While Trump and other presidents “must always have the ability to defend the United States from imminent attack, the executive power to initiate war stops there”, Kaine said. “An offensive war requires a congressional debate and vote.”

Critics said that the resolution would signal US weakness to Iran, but Kaine said that it wasn’t so, rather the opposite was true.

“When we stand up for the rule of law – in a world that hungers for more rule of law – and say ‘this decision is fundamental, and we have rules that we are going to follow so we can make a good decision,’ that’s a message of strength,” Kaine said.

“If we’re to order our young men and women … to risk their lives in war, it should be on the basis of careful deliberation by the people’s elected legislature and not on the say-so of any one person,” Kaine added.

Republican senators who supported the resolution argued it was about clawing back some of the warmaking authority Congress has ceded to the executive branch in recent decades. It wasn’t specifically aimed against Trump.

“This is not about the presidency. … This really is about the proper allocation of power between the three branches of government,” Lee told reporters. “Congress has ceased to be in the war declaration driver’s seat.”

Lee added that he was a “big supporter of this president” and that voting for the resolution was “about supporting President Trump in his foreign policy and his effort to make sure we don’t get involved too easily, too quickly and in an unconstitutional way in any war.”

“It is … important to reassert the legislative branch’s role regardless of which party occupies the White House,” Sen. Susan Collins, also saying that it was overdue for such a resolution to be accepted.

The White House has pledged that the president will veto the resolution if it reaches his desk, arguing that it “fails to account for present reality.”

“This joint resolution is untimely and misguided. Its adoption by Congress could undermine the ability of the United States to protect American citizens whom Iran continues to seek to harm,” the Office of Management and Budget said.

In two Twitter posts, US President Donald Trump called on Republicans to vote against the resolution.

….If my hands were tied, Iran would have a field day. Sends a very bad signal. The Democrats are only doing this as an attempt to embarrass the Republican Party. Don’t let it happen!