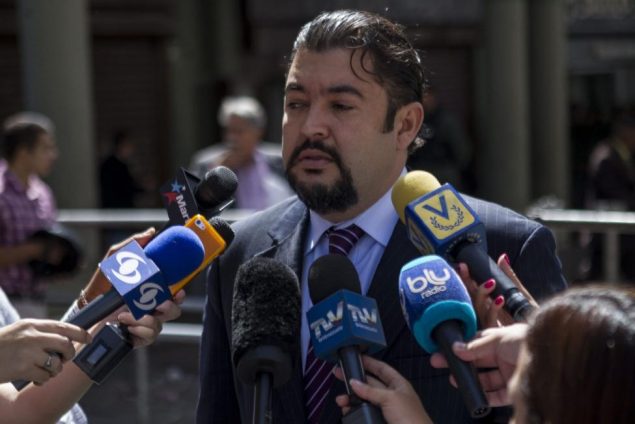 Guaido’s chief of staff, Roberto Marrero, has been arrested and accused of leading a “terrorist cell” (Santi Donaire/EPA)

The Venezuelan Economic and Social Development Bank (BANDES), as well as Bank of Venezuela and Bicentenario Bank, were targeted. The move came as a response to the arrest of Roberto Marrero, self-proclaimed “Interim President” Juan Guaido’s chief of staff, in the early hours of Thursday morning.

“The regime’s continued use of kidnapping, torture, and murder of Venezuelan citizens will not be tolerated by the US,” Secretary of the Treasury Steve Mnuchin said in a statement. “Roberto Marrero and other political prisoners must be released immediately,” he added.

BANDES is a bank created to support development projects. Bank of Venezuela and Bicentenario bank are two of the major state-owned banks in Venezuela and are the principal banks through which the government pays public pensions and benefits. Two other banks, based in Bolivia and Uruguay, and owned by BANDES, were also targeted by the latest round of sanctions. All US assets in which these entities hold more than 50 percent of shares were blocked, and US persons and companies prohibited from dealing with them.

The US Treasury had imposed sanctions against Venezuela’s state mining company Minerven earlier this week, after having imposed a de facto oil embargo in late January.

Roberto Marrero, a high-ranking figure in Guaido’s Popular Will party, was reportedly detained on Thursday in a raid on his home by Venezuelan intelligence service SEBIN. Marrero’s lawyer, Joel Garcia, told press that his client is being detained in SEBIN headquarters at El Helicoide in Caracas.

“Marrero was the person responsible for organizing these criminal groups,” Reverol told reporters, adding that a number of weapons as well as foreign currency had been seized. He added that the operation was done in coordination with the Attorney General’s office, and had a court-ordered arrest warrant.

Marrero’s bodyguard, Luis Alberto Paez, was also detained in the operation, according to reports. According to local witnesses at the time of the arrest, Marrero claimed that the weapons had been planted in his apartment.

The arrest drew a swift response from opposition leaders and US officials.

“As they cannot take the interim president prisoner, so they seek out people closest to him,” Guaido said in a press conference, adding that “Operation Freedom” continues around the country. When pressed about calling for a foreign intervention, the opposition leader said he would “demand whatever is required” to “put an end to the usurpation.”

US Secretary of State Mike Pompeo wrote on Twitter that the US condemned the arrest of Marrero, calling for his immediate release. “We will hold those responsible accountable,” he added.

Trump’s Special Envoy for Venezuela, Elliott Abrams, had likewise vowed “consequences” for those involved in Marrero’s detention. Abrams is known for his leading role in the Reagan administration’s Central America policy, including the Iran-Contra scandal, and later for advising George W. Bush in the lead up to the war in Iraq.