US looks to recover from Venezuela, UK setbacks 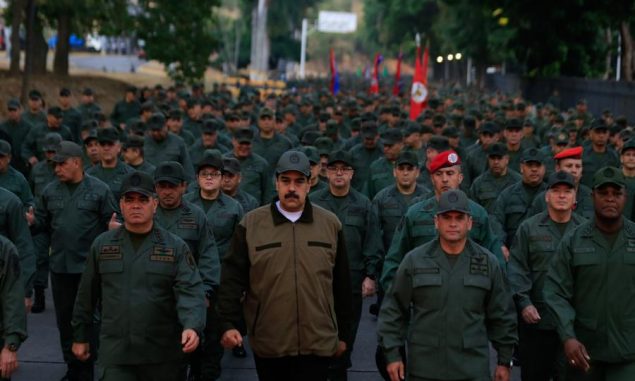 The US has suffered two serious security setbacks, the first in Venezuela and the second in the United Kingdom.  Both hand victories to China and Russia, potentially adversarial countries.

While the full story in Venezuela remains to be told, it is clear that for a number of months there were direct negotiations between Juan Guaido, widely recognized as the Interim (and real) President of Venezuela, and top members of the Maduro government. The most important of these was Defense Minister Vladimir Padrino Lopez.

The White House and the National Security Council claim not to have been directly involved in the discussions, but clearly was interested in helping to engineer a “peaceful transition” in Venezuela and Maduro’s exit. In a TV interview on April 30th, US National Security Advisor John Bolton called on “key figures” of the Maduro administration to “make good on their commitments.”  Padrino, however, took a proactive pro-Maduro role instead of siding with Guaido, much to the dismay of the Guaido camp and the United States.

The London Telegraph reported that President Trump’s special envoy to Venezuela, Elliot Abrams, had prepared “a 15-point document [which] had been discussed between Mr. Guaido’s allies and members of Mr. Maduro’s inner circle.”  According to Bolton, “The Supreme Court would declare Maduro’s constituent assembly illegitimate. That would clarify for everybody, if anybody needed clarification, the legitimacy of the national assembly led by Juan Guaido.  And then that would have allowed the military to cover themselves in a way, Defense Minister Padrino and others, to act.  Now for reasons that are still not clear, that didn’t go forward.”

Among those talking to Guaido and the Trump administration was the Chief Judge of the Venezuelan Supreme Court, Mikhail Moreno. But the expected action by the court never happened.

Also on the Bolton list was Major General Ivan Rafael Hernandez Dala, the commander of the Presidential Guard (officially Comandante de la Guardia de Honor Presidencial. Director General de Contrainteligencia Militar).  Senator Marco Rubio back in February called him a “serial human rights abuser.”  Hernandez has been sanctioned by the US Treasury Department and by the European Union.

In the latest report about the arrangements made by Guaido and his representatives, where officially the US says it was not involved, Guido OAS Representative Gustavo Tarre, said that “Nicolás Maduro had initially agreed to flee the country, but changed plans at the last minute.”

All of this suggests that the Guaido’s Venezuelan interlocutors were setting a trap for both Guaido and the United States.  If some may see the hands of the Soviet and Cuban secret services they may not be wrong.

So far as is known, there was not any discussion of the 20,000 Cuban troops and an unknown number of Russian mercenaries backing the regime.  Thus, once the trap was set it was relatively easy for Maduro with his Russian and Cuban backers to put down the protests.

For the Trump administration, so far unwilling to use either overt or covert force, the Venezuelan trap was a big setback for US foreign policy and for American credibility in the Americas.  The administration was at some pains to explain how it could fight a war in Afghanistan (some 10,831 miles away) but would take no action in Venezuela (2,196 km away).

For Russian President Vladimir Putin the US failure in Venezuela was a cheap victory, allowing the Russian government to stir up trouble with little consequence. And, despite renewed sanctions on Cuba, the Cubans continue to control both the Venezuelan government (by providing security) and the Venezuelan military (by acting as minders).  Meanwhile, the Russians are working to set up an air base on La Orchila, a Venezuelan island in the Caribbean sea to accommodate Russian Tu-160 strategic nuclear bombers. Russian Tu-160’s and other military aircraft had already called on Caracas.  And along with Russian advisors, Russia is setting up a Helicopter training Center for Venezuela’s armed forces.

While the setback in Venezuela no doubt damaged America’s reputation, the setback in the UK may have damaged the sensitive Five Eyes security relationship between the US and the UK.

Five Eyes is a special security system shared by the US, UK, Canada, New Zealand, and Australia allowing the sharing of high-level intelligence on common threats.

There are two reasons the Five Eyes arrangement is in trouble.  On the one hand, there is the shambles of the Brexit process brought about by the May government, which has now received a significant setback in local UK elections, losing over 1,300 seats.  But May also quietly – and largely under the table – was aligning Britain with EU defense programs and policies that the US views as a threat to the entire post-World War II security structure and NATO.

In a lecture this week at the American Heritage Foundation, entitled “Brexit and the US-UK Defense Relationship,” Professor Gwythian Prins said, “Having successfully prevented the EU from developing a defense role for over forty years, bizarrely, the [UK] Government’s Withdrawal Agreement and associated documents threaten to place Europe’s premier defense and intelligence power under EU control. This is the reverse of what the people voted for in June 2016 and is a constitutional outrage.” Prims believes that the May administration is damaging the defense relationship with the United States and, specifically the Five Eyes security system.

Prins is emeritus research professor at the London School of Economics and the founding director of the Mackinder Center.  He is a member of the Chief of the Defense Staff’s Strategy Advisory Panel and of the Royal Marines Advisory Group. He is an honorary member both of the RN Special Boat Service and of the Army Intelligence Corps and is a visiting research professor at the University of Buckingham.  He heads up a website called Briefings for Brexit.

While Brexit still hangs in the balance, and even Prime Minister May’s political survival is in doubt, the Prime Minister has been busy undermining a key tenet of the US position on China’s Huawei.  The case against Huawei is not only the fact that the company is Chinese, but that it is beholden to the Chinese government and is not transparent.  The special focus has been on Huawei’s telephone switching systems and, more recently on its push to get Western governments to adopt its 5G mobile phone platform.

The May government got exposed through leaks that she was planning to let Huawei in “under certain limitations.”  The UK government has not explained how it would implement any “limitations” and in fact whether such a technical solution would work to protect national security.  One of the major problems facing governments is the massive insecurity of mobile phones (which are already somewhat seamlessly synchronized with computers, tablets and laptops) and the fact that users still prefer them in spite of compromising their privacy.  Top world leaders such as former French President Nicholas Sarkozy, former Italian Prime Minister Silvio Berlusconi, Chancellor Angela Merkel, and many others in leadership positions around the world, have had their private conversations and sensitive communications compromised by successful spying on mobile devices, even when they were using so-called “secure” mobile phones.  The danger of Huawei is that it is a direct pipeline to Chinese intelligence and could expose technological, military and political secrets that would benefit China’s military and its industries.

Christopher Balding and Donald C. Clarke have carried out a thorough study “Who Owns Huawei” which Huwaei itself claims it is employee owned.   They found that the “Huawei operating company is 100% owned by a holding company, which is in turn approximately 1% owned by Huawei founder Ren Zhengfei and 99% owned by an entity called a ‘trade union committee’ for the holding company.”  Among their conclusions is that, “Given the public nature of trade unions in China, if the ownership stake of the trade union committee is genuine, and if the trade union and its committee function as trade unions generally function in China, then Huawei may be deemed effectively state-owned.”

The Balding-Clarke study confirms what the US Intelligence Community has been arguing all along about Huawei.

Why would May, already potentially jeopardizing the “special relationship” between the UK and the US with it’s under the table arrangements on defense with the EU, also challenge the US position on Huawei?  There are no answers yet, but meanwhile, the US has suffered another security and foreign policy setback and handed what appears to be an economic and intelligence victory to China.

In the broadest sense, this was a bad week for the United States which still carries the overall burden of both Atlantic and Pacific defense. What Washington will do to repair the situation is still uncertain.