US diplomat convicted over Iran-Contra appointed special envoy for Venezuela 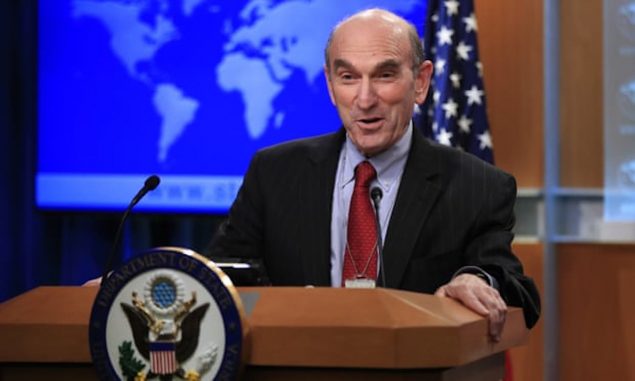 Elliott Abrams, who has links to failed coup against Chávez, is joining Pompeo to urge security council to recognize Guaidó as head.

The thick eyebrows were familiar from another era, even if the crown was balder, and the state department’s new hire admitted he had not worked there for 30 years.

Elliott Abrams was appointed US special envoy for Venezuela on Friday, as Donald Trump’s administration and European leaders on Saturday further increase the pressure on the socialist president, Nicolás Maduro, to step aside from leading the country he has taken into a deepening crisis.

Abrams will accompany the US secretary of state, Mike Pompeo, to a meeting of the UN security council in New York on Saturday, during which Pompeo will urge members to join the US in declaring Venezuela’s opposition leader Juan Guaidó as the legitimate head of state.

Abrams, a neoconservative, has returned to the centre of the political action over the region like the ghost of administrations past. Even if he was not chosen expressly to haunt Latin America and Congress, the Trump White House clearly does not care if they are spooked.

Abrams is widely remembered in Central America, but particularly from his time in the Reagan administration, when he tried to whitewash a massacre of a thousand men, women and children by US-funded death squads in El Salvador, when he was assistant secretary of state for human rights.

He shrugged off the reports as communist propaganda, and insisted: “The administration’s record in El Salvador is one of fabulous achievement.”

Abrams also helped organise the covert financing of Contra rebels in Nicaragua behind the back of Congress, which had cut off funding. He then lied to Congress about his role, twice. He pleaded guilty to both counts in 1991 but was pardoned by George HW Bush.

More than a decade later, working as special Middle East adviser to former president George W Bush, Abrams was an enthusiastic advocate of the Iraq invasion. He was in the White House at the time of the abortive coup in 2002 against Hugo Chávez. The Observer reported that Abrams gave the green light to the putsch, another an inspector general enquiry found no “wrongdoing” by US officials.

That was not enough to erase his reputation as the assistant secretary of dirty wars. The message sent by his return to the front rank of US diplomacy will not be missed in Caracas.

As an instinctive isolationist and “America Firster”, Donald Trump mostly abhors foreign entanglements but he is clearly willing to make exceptions. Both the vice-president, Mike Pence, and the national security adviser, John Bolton, have recently echoed the idea of the 19th-century Monroe Doctrine, that Latin America, being on the US’s doorstep, is not covered by the administration’s general non-interventionist approach.

In the case of the Americas, Pence suggested earlier this week, Trump was prepared to intervene for the right reasons.

“President Trump has always had a very different view of our hemisphere,” Pence told Fox News. “He’s long understood that the United States has a special responsibility to support and nurture democracy and freedom in this hemisphere and that’s a longstanding tradition.”

That approach has opened the door to a veteran neoconservative like Abrams, now aged 70. He had already come close to joining the administration at its very beginnings. He was about to be named deputy to Trump’s first secretary of state, Rex Tillerson, when Trump got wind of what Abrams had said about him during the presidential campaign and vetoed the appointment. Abrams wrote a commentary in the summer of 2016 warning that the Republican party “has nominated someone who cannot win and should not be president of the United States”.

The article in the Weekly Standard was titled “When You Can’t Stand Your Candidate”.

Yesterday, all that was forgotten and Abrams, standing alongside Tillerson’s successor, Mike Pompeo, declared: “It’s very nice to be back.

“This crisis in Venezuela is deep and difficult and dangerous,” he added. “And I can’t wait to get to work on it.”