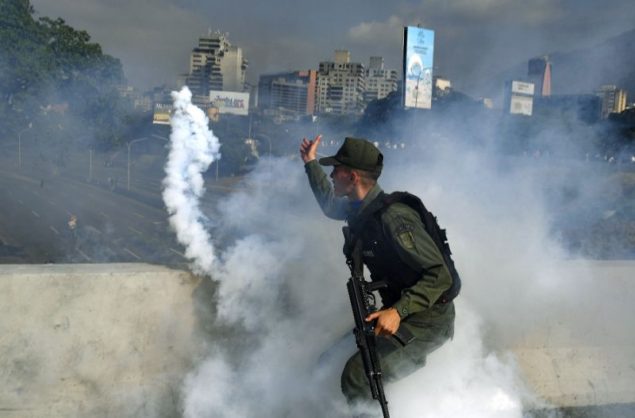 Bolton, Pompeo and Pence all came up with statements supporting the attempted military coup in Venezuela almost as soon as it started, describing it as an example of “freedom and democracy”.

Almost immediately following the start of armed coup attempt in Venezuela, the US declared its support to actions of self-proclaimed acting president Juan Guaido and soldiers supporting his attempt to seize power.

US Secretary of State Mike Pompeo and President National Security Adviser John Bolton and even Vice President Mike Pence came with statements supporting the coup and desribing it as an example of “freedom and democracy”.

Venezuelans have made clear that the current path toward democracy is irreversible. Venezuela’s military has a choice: embrace democracy, protect civilians and members of the democratically-elected National Assembly, or face more man-made suffering and isolation.

To @jguaido, the National Assembly and all the freedom-loving people of Venezuela who are taking to the streets today in #operacionlibertad—Estamos con ustedes! We are with you! America will stand with you until freedom & democracy are restored. Vayan con dios! #FreeVenezuela

Meanwhile, reports are appearing in social media that fighters loyal to Guaido have been engaged in some kind of clashes with Venezuela’s National Guard in the area of Francisco de Miranda Airbase in Caracas.

According to sufracing reports and videos, both sides employ vehicles, tear gas and even time to time open live fire.

Pro-opposition sources also spread a video showing how a military vehicle slammed a crowd of pro-Guaido activists near the Francisco de Miranda Airbase.

!!! Intense clashes, a Venezuelan military vehicle just drove into a crowd of civilians on the highway. #Venezuela pic.twitter.com/pcSTd3TwMf

It’s apparent that any casualties among civilians or even armed Guaido supporters will be blamed on the Venezuelan government led by President Nicolas Maduro.

Commenting on the recent developments, the government said it was “deactivating” an attempted coup by a small group of “treacherous” soldiers.

“We are currently facing and deactivating a small group of treacherous military personnel who took positions in the Altamira distributor road to promote a coup d’etat,” Communications Minister Jorge Rodriguez said on Twitter.

“We call on the people to remain on maximum alert to — with our glorious National Bolivarian Armed Forces — defeat the attempted coup and preserve peace.”

The situation is developing.