US data shows no underlying economic acceleration under Trump 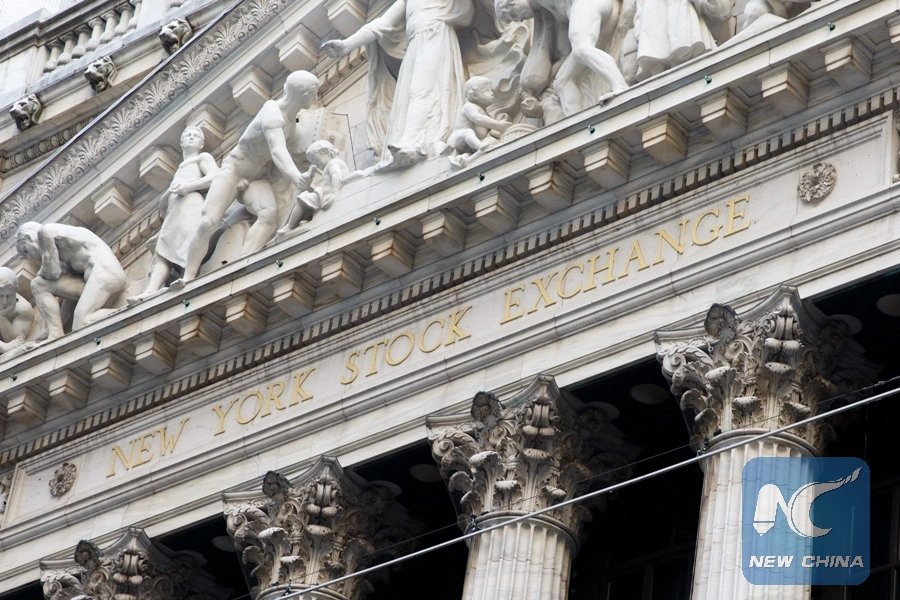 Given President Trump’s tax cuts, and his claim that he will strongly accelerate the U.S. long term annual average growth rate to 4 percent, or even higher, considerable attention is necessarily focusing on the latest U.S. GDP figures. Almost simultaneously the IMF published its new five-year prediction for U.S. economic growth. Taking these together therefore provides a significant opportunity to assess whether President Trump’s policies have succeeded in changing the growth path of the U.S. economy.

The latest U.S. data shows clearly that in his first year in office President Trump failed in his claim to fundamentally accelerate U.S. growth. U.S. GDP growth in 2017 was only 2.3 percent – scarcely above the long-term U.S. average growth rate of 2.2 percent. The recently published U.S. data now available for the first quarter of 2018 also shows no change in the underlying situation.

The U.S. GDP data shows the U.S. economy proceeding on a very predictable track of slow average growth but cyclical recovery from its extremely poor performance in 2016. In more detail:

The fundamental data is shown in Figure 1. It shows that U.S. year on year growth has recovered from far below the average growth of only 1.2 percent in the second quarter of 2016 to above average 2.9 percent in the first quarter of 2018. This normal cyclical fluctuation, however, leaves the long-term average annual U.S. growth rate unchanged at slightly above 2 percent. 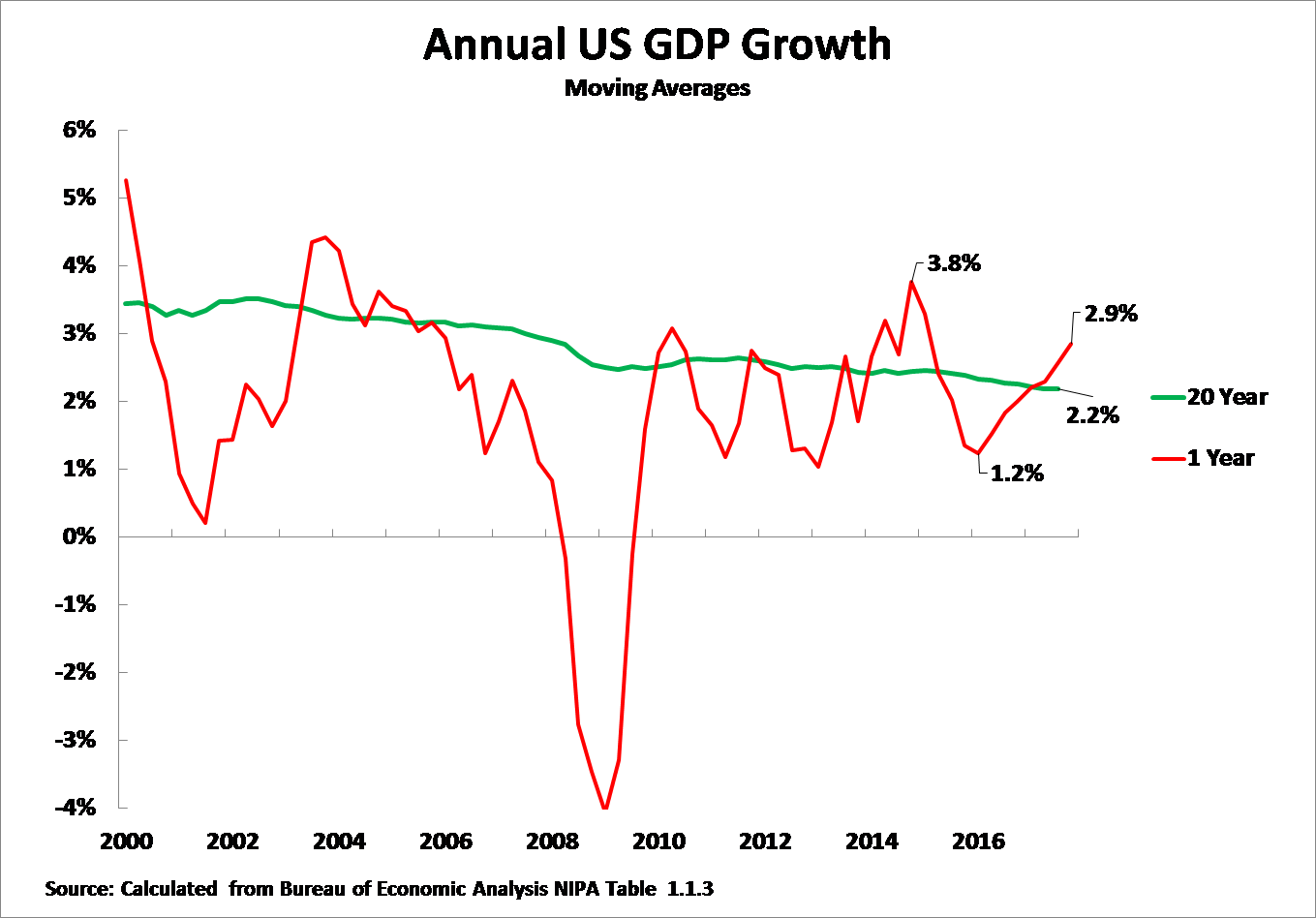 Turning to the newly released IMF projections for the U.S. economy for the next five years, published in its twice-yearly World Economic Outlook, which are shown in Figure 2. As may be seen the IMF projects the same overall pattern as in the analysis given above – i.e. relatively fast U.S. growth, above its medium/long-term average, in 2018-2019 followed by slowing growth in 2020-2023. 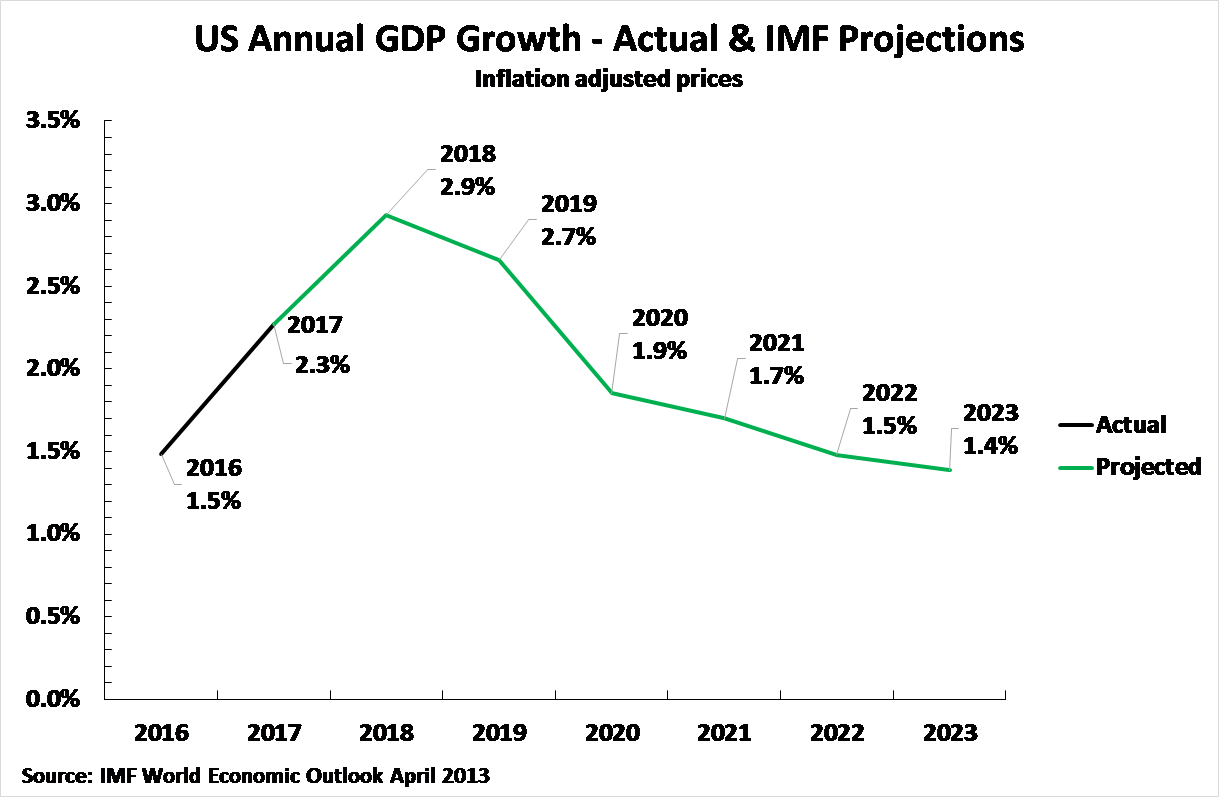 However, the overall U.S. growth projected by the IMF over the five-year period as a whole is significantly lower than the analysis above. The IMF projects only an average 1.8 percent annual average U.S. GDP growth between 2018 and 2023.

It is extremely unclear why the IMF projects this significant slowdown in the U.S. economy – the IMF provides no explanation for this. Analysis of the underlying features of the U.S. economy also indicate no reason to assume this. Analysis shows the main determinant of U.S. medium/long-term growth is U.S. net fixed investment – the correlation between the percentage of net fixed investment in U.S. GDP and U.S. GDP growth over an eight-year period is an extremely high 0.71.

However, at present, while the U.S. net fixed investment is low by historical standards, there is currently no sign of it significantly worsening. There is therefore no reason to believe there will be a substantial slowdown in U.S. medium/long-term economic growth.

In summary, both the latest U.S. GDP data and the latest projections of the IMF indicate the U.S. economy is experiencing a normal cyclical upturn. President Trump has not achieved any increase in the medium/long-term growth rate of the U.S. economy.

Opinion articles reflect the views of their authors, not necessarily those of China.org.cn.