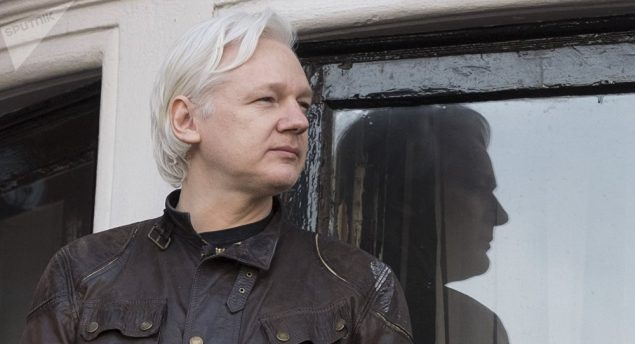 Last month Julian Assange was arrested in London and subsequently charged with helping Chelsea Manning break into a US government computer. Now the US Justice department have indicted him with 17 additional charges, including violating the Espionage Act.

The US Justice Department has indicted WikiLeaks founder Julian Assange on 17 additional charges, including violating the Espionage Act. Assange was arrested last month in London and subsequently charged with helping Chelsea Manning break into a US government computer.

Among the offenses Assange is now charged with is the allegation that in 2010 he published a “narrow subset” of documents with names of individuals were working with the US government, including sources in Afghanistan and Iraq, as part of Manning’s enormous trove of documents she leaked via WikiLeaks. This, prosecutors allege, “put innocent people in grave danger simply because they provided information to the United States.”

Prosecutors have sought to separate Assange from other journalists, although the charges against him have potential implications for all journalists. John Demers, the Justice Department’s assistant attorney general for national security, told reporters Thursday Assange was “no journalist” but rather someone who engaged in “explicit solicitation of classified information.”

They allege that Assange “repeatedly encouraged sources with access to classified information to steal it” by posting a “most wanted list” of damaging documents on WikiLeaks. This, they said, served as motivation for Manning, among others.

The Washington Post noted the new charges carry a collective potential sentence of 170 years in prison.

Joe Lauria, editor-in-chief of Consortium News, told Sputnik earlier this month that if Assange was prosecuted under the Espionage Act, it “would be the first time any US administration used that section of the Espionage Act to prosecute a journalist for performing an act of journalism and publishing.”

Lauria noted the first indictment against Assange, which dated to March 2018 but was only unsealed following his arrest in April 2019, contained a veiled reference to the Espionage Act.

“Count 1 of the indictment in section B says that Assange is charged with intentionally accessing a computer ‘without authorization and exceeding authorized access, to obtain information from a department and agency of the United States in furtherance of a criminal act in violation of the laws of the United States Code,'” listing the allegedly violated sections of that code, Lauria told . One of those sections was US Code § 793: Gathering, transmitting or losing defense information.

Section 793 “is the real killer one in terms of journalism,” Lauria noted, “because there’s no doubt that journalists, all the time — including Assange — obtain, and hold and possess classified information and disseminate it. That’s criminal under the Espionage Act, 793(e), and it’s mentioned here.”

BuzzFeed noted that none of the charges pertained to the 2016 hacking of the Democratic National Committee server — something it’s been suggesting Assange had a hand in, although he strenuously denies any involvement.

Assange has an extradition hearing in London on June 12, to determine if he will be sent to the US to stand trial. He has vowed to fight extradition attempts.

Meanwhile, Manning was returned to jail in Alexandra, Virginia, last Thursday, for refusing to cooperate with a grand jury seeking her testimony for its investigation into Assange. She previously was detained for 62 days for failing to cooperate, only being freed two weeks ago when the grand jury’s term expired. It’s unclear what effect the new indictment will have on her jailing, which is intended to compel her to testify.

In 2010, Manning, a former US Army analyst, published via WikiLeaks hundreds of thousands of documents she’d stolen from the US government, including diplomatic wires and footage proving the US covered up war crimes by its soldiers. She was sentenced to 35 years in prison, but freed in 2017 after US President Barack Obama commuted her sentence.